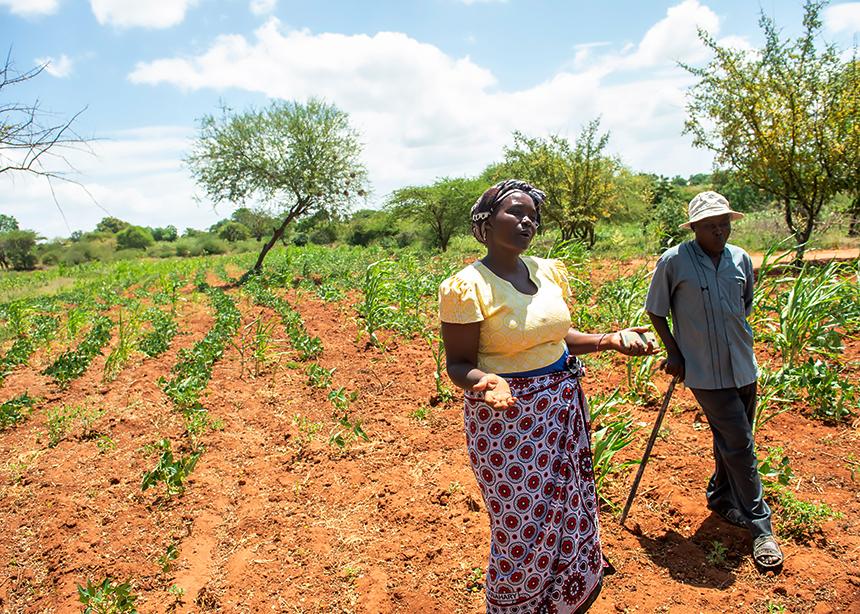 Joyce Ngumbao and her husband Pius Kisumo stand in a corn and bean field on their farm in Kwa Kavisi, Kenya, that is not planted using conservation agriculture techniques, but was prepared using conventional methods of plowing and scattering seed. These crops are stunted and not growing well. When they can afford to hire help, they want to plant this field with conservation agriculture methods too. (Photo by Matthew Lester)

The mandate of a new Mennonite World Conference (MWC) creation care task force states that, “MWC is a global communion of Anabaptist churches that are together facing the climate crisis.” It then asks:  “What does it mean to follow Jesus into this crisis?”

The task force is to:

The volunteer task force will not have dedicated staff capacity within MWC, but it will have at its disposal the $65,600 in the MWC Carbon Offset Account.

Since 2010, the organization has put aside $50 for every 1,000 kilograms of carbon burned as a result of official MWC air travel. The money, to be managed by the task force, is intended as “seed money for grants to help churches with creation care initiatives.”

Task force chair Doug Graber Neufeld of Eastern Mennonite University has worked with MCC in Cambodia and Kenya, connecting with farmers. "All those farmers know that something is happening," he says of climate crisis. He speaks of a Kenyan family whose crops were wilted in a place that used to be productive. Now, they are forced to cut down forest to make charcoal to sell in order to feed themselves. The bitter irony, of course, is that their cutting of trees contributes to the climate change that forced them out of agriculture.

Based on his experience, Graber Neufeld says many people in the Global South are well aware that they are most affected while Northerners are most responsible for emissions. This dynamic must be part of the MWC work, he says.

The three task force members from the South were not available for comment.

The task force, which has met once, will meet virtually at least bi-monthly with work happening between meetings.

As an indication of the importance of addressing the climate crisis, the work of the task force is "owned by" all four MWC Commissions: Deacons, Mission, Peace, and Faith and Life. It is empowered to propose that Commissions do tasks it recommends.

John Roth—coordinator of the Commissions—says part of the challenge is to be appropriately sensitive to the range of assumptions and beliefs about climate change within the Anabaptist world. Not everyone agrees, he notes.

Rick Cober Bauman, head of MCC Canada, says that among people he met with in Kenya in 2018 the question of climate was beyond debate. The sense of the conversation there, as he relays it, was that climate crisis was so obvious, how could anyone believe otherwise?

In general, Cober Bauman says that MCC program staff hear about climate impacts in a substantial way from partners on the ground. That is part of the reason he says MCC is putting a strong, sharp advocacy person—Anna Vogt, who heads the MCC Ottawa Office—on the MWC task force.

In addition to Vogt and chair Graber Neufled, the other members of the task force are Rebecca Froese, a German PhD student; Sibonokuhle Ncube, a Zimbabwean climate activist and student at Anabaptist Mennonite Biblical Seminary; Juliana Morillo, a missionary and climate organizer in Colombia; Nindyo Sasongko, an Indonesian PhD student at Fordham University; and Jennifer Schrock, an American theology student and director of the Mennonite Creation Care Network. All are involved in Anabaptist congregations.

The three task force members from the Global South were not available for comment.

‘An embodied sense of responsibility’

Marta Bunnett Wiebe is a young Mennonite woman who has thought very practically about faith, community and our relation to the rest of creation. A 2019 graduate of Canadian Mennonite University in Winnipeg, she and her husband currently grow vegetables on the New Brunswick farm where she grew up and developed an embodied sense of responsibility for healthy soil, animals and people.

She says it is easy to create a list of things people can do to be sustainable, and such things are important, but her hope is that we, as a church, can grow in imagination for a different way of relating with the land. . . . If we are to really engage thoroughly in conversation and action, it would be helpful to imagine a different way of living in relation with the created world.

Part of this for her is the practice of growing food and part of it is listening to other peoples stories. She would value hearing from Mennonite congregations on different continents.

With the new task force, that sort of imaginative exchange, and the action it can lead to, will now be more possible. 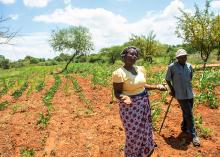 Joyce Ngumbao and her husband Pius Kisumo stand in a corn and bean field on their farm in Kwa Kavisi, Kenya, that is not planted using conservation agriculture techniques, but was prepared using conventional methods of plowing and scattering seed. These crops are stunted and not growing well. When they can afford to hire help, they want to plant this field with conservation agriculture methods too. (Photo by Matthew Lester) 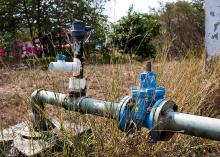 The water pump at MCC partner Sembrandopaz’s experimental farm just outside of Sincelejo, Colombia. The Montes de María region of Colombia is suffering a shortage of water due to a combination of factors, including aggressive land clearing and droughts worsened by climate change, as well as poor infrastructure. The experimental farm is home to one of the only functional water pumps in the surrounding area, and throughout the day local residents come to the farm to fill up containers. (MCC photo by Annalee Giesbrecht) 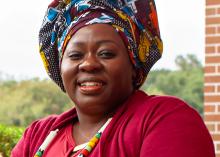 Sibonokuhle Ncube of Zimbabwe is a member of the new MWC creation-care task force. (MCC photo by Brenda Burkholder)