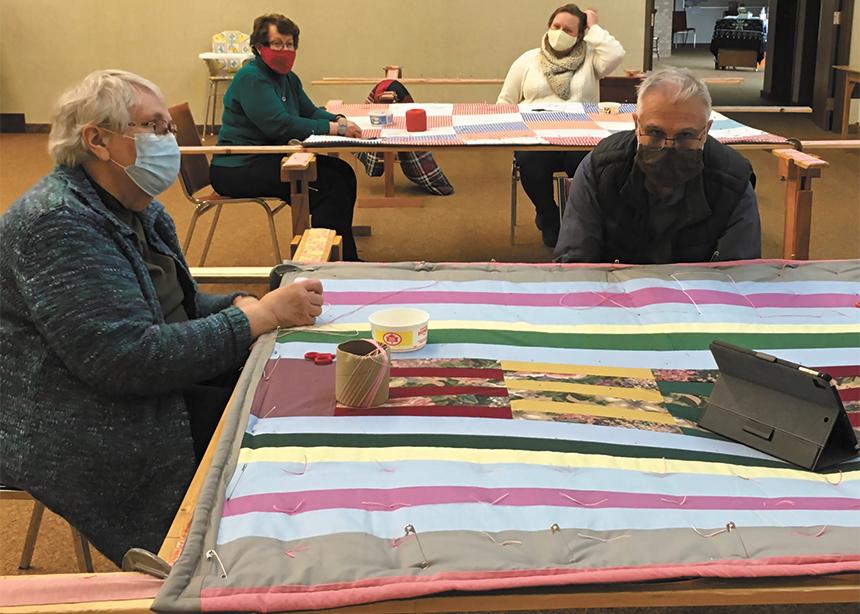 Liz Baerwald estimates that Zoar Mennonite women and men donated more than 5,900 comforters to Mennonite Central Committee since 1962. In the foreground, Liz and husband Greg knot a quilt together, while, in the background, Erna Funk, left, and Pastor Andrea Enns-Gooding work on another. (Photo by Anna Penz)

“It was not a sudden oh-my-goodness-what-are-we-going-to-do conver­sation,” says Liz Baerwald of her church’s decision to close. As she sees it, the conversation began more than a decade ago.

When long-serving pastor Barry Lesser left Zoar Mennonite Church in Waldheim in 2007, the Waldheim congregation hired interim ministers to help them through the transition. Through this process, the church developed a mission statement that included the idea of being called to be “a beacon of hope” in the community.

Around this time, the church sponsored a refugee family from El Salvador. Several other Spanish-speaking families from Colombia also arrived in the community. In 2012, Zoar hired Ben Pauls in the hope that his fluency in Spanish would draw the newcomers to their congregation.

When this hope did not become reality, says Baerwald, it led to “a moment of reckoning for us as to what was happening between us as members.”

Baerwald, who has served as Zoar’s chair for the past 15 years, says the congregation considered closing in 2017, when Pauls left, but they decided unanimously to hire Andrea Enns-Gooding instead. It was a hope-filled decision, but one that was tempered by realism. The congregation would see how far this new relationship would take it.

When COVID-19 arrived, Zoar had already laid plans for Enns-Gooding’s ordination and for the church’s 110th anniversary. In June 2020, despite these hopeful events, the congregation voted to close the following year, giving congregants time to process the decision and prepare themselves for the event.

Zoar traces its origins to 1892, when Mennonite families from Kansas, Minnesota, and North and South Dakota settled in the rural areas that would eventually become the communities of Langham and Waldheim. The General Conference Mennonite Church in the United States sent Nicholas Toews to help these families establish centres of worship.

At first, small clusters of families worshipped together in each other’s homes and in nearby one-room schoolhouses. Eventually, these clusters formed into two groups, both of which bore the name Zoar. According to the Global Anabaptist Mennonite Encyclopedia Online, the two groups became distinct congregations when Zoar Mennonite divided in 1960. In 2018, the Langham congregation changed its name to Langham Mennonite Fellowship.

The Waldheim congregation constructed its first church building in 1912, with the first baptismal service being held in 1914. In his 1980 history of the congregation, Ed Schmidt writes, “A lot of boys were getting baptized to help them with their conscientious objector [status].”

As early as the 1920s, the language of worship was English, but when a dozen families arrived from Russia, following the Russian Revolution, the congregation reverted to using German.

Membership grew steadily during the 1920s and ’30s, peaking in 1935 at 254. But, as Schmidt writes, the Great Depression dramatically impacted membership, as families left Waldheim for the promise of a better life elsewhere. By 1940, membership had dropped to 181.

In the late ’40s, Waldheim experienced a spiritual awakening. Schmidt writes that the revival began when teenagers asked their high school principal, George Thiessen, to become their spiritual counsellor. All of the community’s churches had large baptisms in 1949, with Zoar baptizing 36 candidates.

In 1960, the congregation split over issues related to language, paid versus lay ministry, and denominational conference versus non-denominational missions. Between 60 and 75 members, including several lay leaders, withdrew to form Grace Mennonite Mission.

Not long after, the congregation hired its first full-time, salaried minister, Henry Funk.

In recent years, Zoar has had an average Sunday attendance of 22, and most are over 65. Those in leadership positions, like Baerwald, have continued to do their jobs for many years.

On March 25, regular congregants met at the church for a service of release and blessing. As they walked through their church building, they shared memories of their life together.

They held their final worship service on April 11, with 58 people attending, including some former members and non-resident members.

An unwelcomed surprise in the process of closing has been the discovery that the church has title to a small cemetery located south and west of Waldheim. Known as the Schmidtsburg Cemetery, it is situated near the site of the former Schmidtsburg School, where some of the earliest congregants met for worship. Baerwald says the congregation is still trying to figure out what to do about this property.

The church building, which was constructed in 1984, has been sold to the Town of Waldheim. It will house town offices and meeting spaces and will continue to be home to the Waldheim preschool.

Baerwald says most members haven’t decided where they will attend church in the future. Some may choose to attend Rosthern Mennonite, others will likely go to Eigenheim, and still others may make Laird Mennonite their new church home.

“Even though we’re not meeting together, this community still exists for us,” says Enns-Gooding.

This article appears in the May 10, 2021 print issue, with the headline “‘This community still exists for us.’” It was corrected on July 14, 2021, to accurately describe the decision-making process for closing. 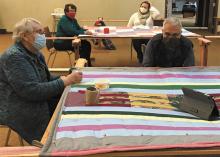 Liz Baerwald estimates that Zoar Mennonite women and men donated more than 5,900 comforters to Mennonite Central Committee since 1962. In the foreground, Liz and husband Greg knot a quilt together, while, in the background, Erna Funk, left, and Pastor Andrea Enns-Gooding work on another. (Photo by Anna Penz) 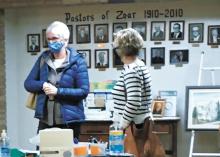 Following a service of release and blessing, Zoar Mennonite congregants visit together in the church foyer. (Photo by Anna Penz) 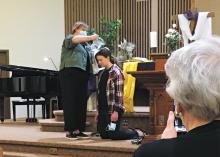