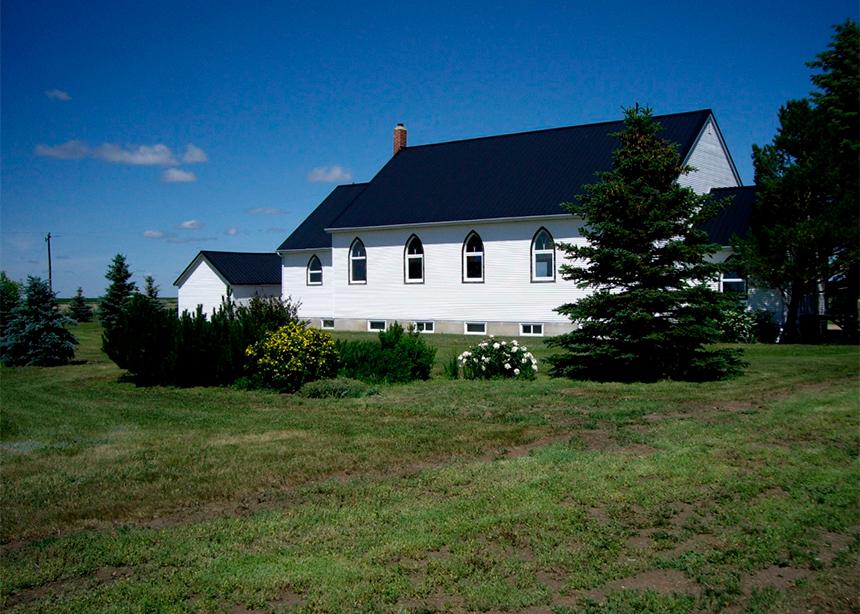 The building that has served Hanley (Sask.) Mennonite Church since 1956. (Photo courtesy of MC Saskatchewan website)

This may be a painful way to view what has happened to Hanley Mennonite Church, the congregation he has pastored for the past 32 years, but he says it’s preferable to thinking of the church simply as an organization. “Then you think of [closing] as a type of failure and you start blaming others,” he says. “But if you understand it as a life cycle in the personal sense, it allows you to think of other reasons why this is happening.”

Hanley Mennonite made the difficult decision to close in January and held its final service on Easter Sunday, April 4; 27 people attended, including non-resident members from Saskatoon.

For some years, attendance averaged 15 to 20 people, including children. The official membership is 75, but many no longer live in the community.

Joy Kroeger prepared a history of the congregation for the closing service. Much of what follows is gleaned from her writing.

In 1924, Mennonite immigrants from the Soviet Union (now Ukraine) settled on farms west of Hanley, just over 60 kilometres south of Saskatoon. By 1925, they were holding worship services in each other’s homes and machine sheds.

That year, these families joined other Mennonites to form the Nordheimer Gemeinde, a group of congregations that, at its peak, had 400 members in a broad area spanning much of southern Saskatchewan. But by the 1930s the Gemeinde had decreased to three congregations. Hanley, Dundurn and Pleasant Point Mennonite churches remained part of the Gemeinde until it dissolved in 1975.

The congregation built its first meetinghouse in 1929, on 0.8 hectares of land purchased by the ladies aid group.

During a large celebration in the 1950s, a beam in the building’s foundation broke, collapsing the floor. The church constructed a new building in 1956. At its dedication, Pastor Jacob Schellenberg preached on I Corinthians 3:11: “For no other foundation can anyone lay than that which is laid, which is Jesus Christ.”

Also during the 1950s, the congregation ordained two women to serve as missionaries. Esther Patkau served in Japan for 30 years, and Mary Epp served in the Congo for 23 years.

The church called Gary and his wife, Margaret Ewen Peters, into ministry in 1989. As the congregation’s first salaried ministers, they served together until 2011, when Margaret resigned to serve the Fiske and Herschel Ebenfeld Mennonite congregations. Gary continued as Hanley Mennonite’s sole pastor on a half-time basis.

Kroeger writes that, when the church dwindled in numbers during the 1990s, the remaining congregants worked at being an intentionally intergenerational group. They also rewrote their constitution and adapted their church structure in response to this evolving reality. Eventually, congregational meetings and church council meetings were one and the same thing, as they became what Kroeger describes as a “committee of the whole.”

In early 2020, Gary told the congregation he wished to move toward retirement. He wanted to resign from his duties at Hanley Mennonite and partner with Margaret once again in serving the Fiske and Herschel congregations.

The Hanley congregation knew it needed to make a decision.

“We no longer had the numbers, the energy or the finances to continue as we had in the past,” writes Kroeger. And so the church elected to close.

Decisions about what to do with the building, the land and the cemetery have yet to be made, and the future for members is also unknown.

“We’re a very close group,” Kroeger says. “Even though the church is closing, there is interest in continuing to get together for worship.”

Gary has encouraged congregants to transfer membership to another church, ideally another Mennonite Church Saskatchewan congregation.

But Kroeger says this isn’t so easily done during a pandemic. “With COVID, it’s not an easy thing for us to move to another body right now,” she says. “At this point, we can’t learn to know another church enough to say that we want to transfer. I think that’s why our group has expressed interest in continuing.”

Gary says he isn’t sure what the future will bring, but knows that, although the church building is closing, the church lives on in the people. “We are part of a larger and grander body,” he says, “and we will be called to participate in ways we can’t imagine yet.”

This article appears in the April 26, 2021 print issue, with the headline “The church lives on in the people.” Do you have a story idea about Mennonites in Saskatchewan? Send it to Donna Schulz at sk@canadianmennonite.org. 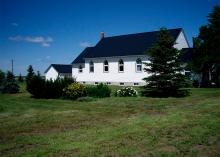 The building that has served Hanley (Sask.) Mennonite Church since 1956. (Photo courtesy of MC Saskatchewan website) 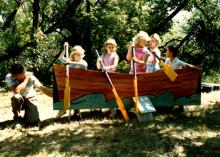 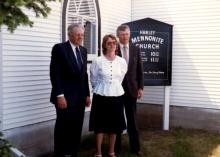 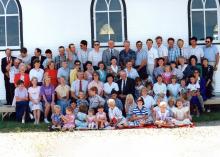 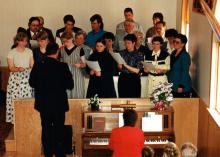 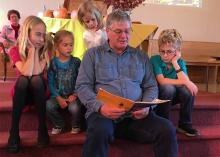 Steve Kroeger reads a story at Hanley Mennonite Church in 2019; listening, from left to right, are children Leena Robins, Callista Robins, Sophia Robins and Ayden Robins. In the background is Joy Kroeger. (Photo by Gary Peters)