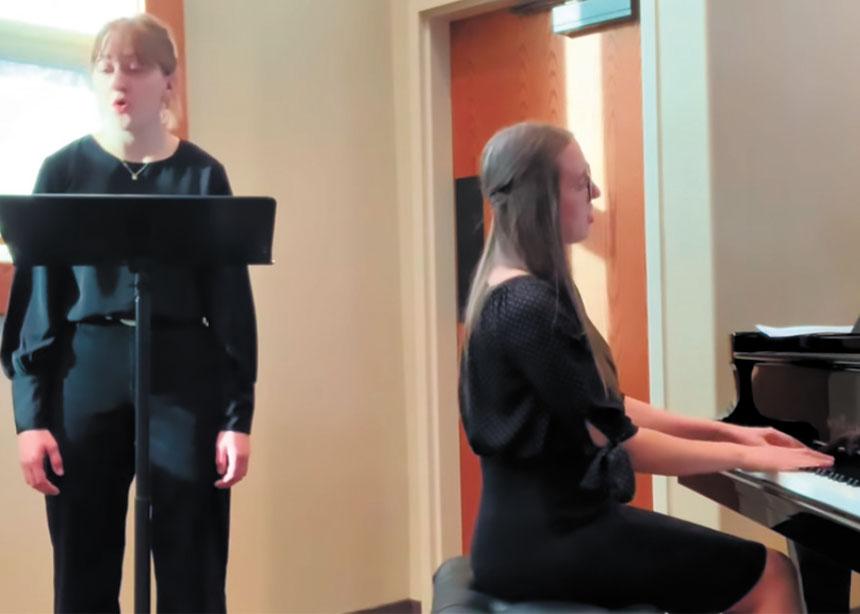 Sisters Joanna, left, and Anneli Loepp Thiessen presented several hymns in the Voices Together collection by women composers, at a recent lecture-recital. (Screenshot by Janet Bauman)

Celebrating the contribution of women composers in Voices Together means reclaiming the voices of historical women whose work has been overlooked and also to “elevate the voices of women who are living,” said Anneli Loepp Thiessen. She led a recent lecture-recital as part of the virtual Noon Hour@Home Concert Series at Conrad Grebel University College.

Calling her presentation, “Still singing: Women composers and the Voices Together hymnal,” Loepp Thiessen, who served on the Mennonite Worship and Song Committee that gave shape to Voices Together, shared stories and presented four hymns by women chosen for the collection. She composed the music for two of them. She also provided context for the intentional effort to include more female composers in Voices Together than were represented in the 1992 Hymnal: A Worship Book.

Loepp Thiessen, a current doctoral student at the University of Ottawa in interdisciplinary music research, is studying women songwriters of contemporary worship music. She co-chaired the popular idioms (folk and contemporary music) committee and served on the tune and accompaniment committee for Voices Together.

Committee members gave thought to how genders, ethnicities, cultural contexts, and spiritual and language expressions were represented in the hymnal. Early on in the four-year process of selecting hymns, they noticed that there was a lack of female composers and text writers. She said they made a deliberate effort to address that gap and, while it “feels exciting” to be increasing the numbers, there is still “a long way to go.”

In Hymnal: A Worship Book, 14.8 percent of text writers and 9 percent of tune writers were women. Committee members had to do some research to uncover material by women, and invite current writers and composers to contribute.

Loepp Thiessen said this doubling of women’s contributions is “really good progress,” but “there is still a lot of work to be done.”

In her current research, Loepp Thiessen said she will consider why this “significant gap” exists, particularly in the contemporary worship music industry.

For her noon-hour lecture-recital Anneli was joined by her sister Joanna, a voice major at Canadian Mennonite University in Winnipeg.

They presented four hymns, one for each 400- or 500-year span of church history. Joanna sang soprano, while Anneli accompanied on piano and sang alto.

“God, Grant Us Mercy” (No. 142), one of the hymns they shared, dates back to the eighth century AD. Kassia, a Byzantine Greek composer and hymnographer, wrote dozens of liturgical poems and compositions. Her “concise melodies” closely reflect the rhythms of her texts, said Anneli.

Katie Graber, who also served on the Voices Together committee, adapted a transcription of Kassia’s original text and parts of the original melody. She arranged the hymn for leader and congregation, to represent the antiphonal choirs that may have been used at the time it was first composed.

Another hymn is “O Holy Spirit, Root of Life” (No. 376). The text is based on the writings of Hildegard of Bingen, a twelfth-century AD mystic, preacher, philosopher and spiritual teacher who was known for her prophecies, poetry and miracles. Several of Hildegard’s texts and tunes are represented in Voices Together.

Hildegard’s writings were given to Jean Janzen, a contemporary poet and hymn text writer, who adapted them for congregational use as a way to “bring in more voices of historical women,” said Loepp Thiessen. In the Voices Together process, texts in need of tunes were circulated to contemporary Anabaptist composers.

Loepp Thiessen, who said she was “intrigued by Janzen’s setting of Hildegard’s writing” submitted a tune. Noting that the church “has silenced the voices of women in corporate prayer” over the years, she wrote a tune “that prioritizes the voices of sopranos and altos,” while the tenors and basses sing a drone line.

Loepp Thiessen said she was “honoured to tell the stories and share the songs of some of the women represented in Voices Together. Women . . . have always been writing and singing, whether we knew it or not.”

This article appears in the March 1, 2021 print issue, with the headline “Women’s voices in song.” Do you have a story idea about Mennonites in Eastern Canada? Send it to Janet Bauman at ec@canadianmennonite.org.

Related stories:
A hymn by any other number: The story behind ‘Dedication Anthem’
Watch: A tour of Voices Together
New hymnal will be ‘part of the fabric of our lives’ 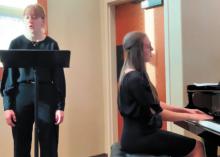 Sisters Joanna, left, and Anneli Loepp Thiessen presented several hymns in the Voices Together collection by women composers, at a recent lecture-recital. (Screenshot by Janet Bauman)