What lingers in the air 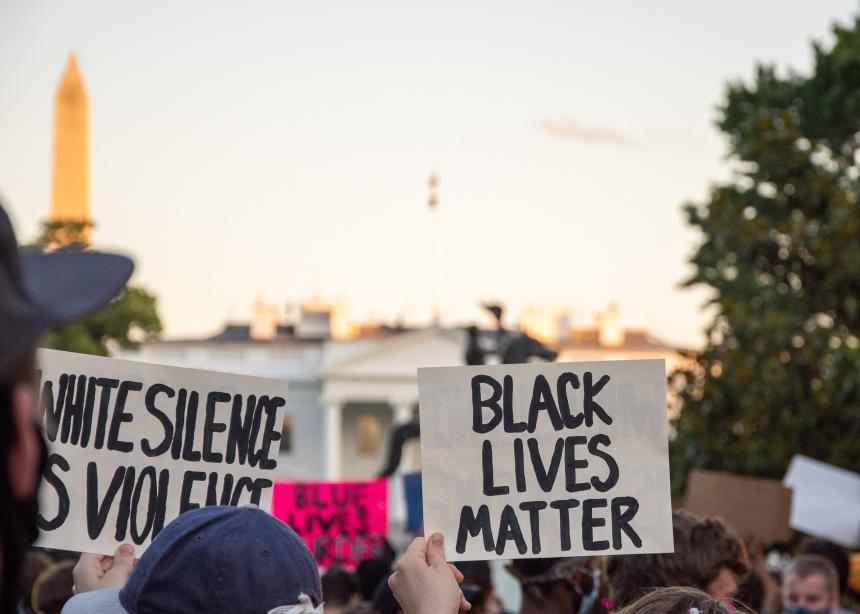 An image from a Black Lives Matter protest in Washington, D.C. (Photo by Koshu Kunii/Unsplash)

At the end of May and into June, as news outlets reported on demonstrations in cities across North America, we witnessed something more powerful than tear gas hanging in the air.

Demonstrators were angry at recent events in which individuals had experienced death at the hands of the police. But the size of the crowds and the intensity of their protests pointed to a long-held frustration with the way racism is embedded in the North American way of life.

While there were some “bad actors” taking advantage of the protests for their own purposes, many demonstrators were expressing something more elemental. Where was the justice that they were entitled to as members of a democratic society? Why were basic human rights being violated—again and again? Floating in the air was the feeling of grief, along with a profound sense of betrayal.

You and I may pride ourselves that we are not like the bigots carrying symbols of hatred and chanting white-supremacist slogans. But we live in a racist society and we benefit from the way our world is structured—favouring some and discriminating against others, simply because of skin colour.

“The truth is that white racism doesn’t exist only in the KKK bogeyman of the past,” writes Drew G. I. Hart, author of Trouble I’ve Seen: Changing the Way the Church Views Racism (Herald Press, 2016). “Instead, it is pervasive within the air of dominant culture in subtle, nuanced, and often unconscious ways. To acknowledge this doesn’t mean that your network is full of mean people. I don’t question the fact that many white people are extremely nice, but I still believe that most are socialized by and participate in a white dominant culture that has become adjusted to white supremacy and racial marginalization.”

Although Hart writes as an African-American in the U.S. context, much of his message is relevant to Christians in Canada as well. He encourages those of us in the church to take a hard look at our presuppositions, our policies, and our ways of acting that perpetuate injustice and cause trauma for people of colour. We must acknowledge the destruction that racism engenders. Racial inequity contradicts the good-news message of Jesus.

The work of racial reconciliation calls for serious self-examination and repentance. Those of us in dominant positions must recognize the ways in which our privileges have come at the cost of our sisters and brothers. Joseph Barndt, author of Becoming an Anti-racist Church: Journeying Toward Wholeness (Fortress, 2011), writes, “Racism is not only a sin from which we must repent but also an enslavement from which we need to be liberated.”

Indigenous speaker and author Kaitlin Curtice, in a 2018 Sojourners article, “Are white Christians retraumatizing people for the sake of diversity?” writes, “It is worth noting that the trauma we have endured has been at the hands of the church for generations, and our trauma must be recognized by the institutional church to forge a path to communal healing.”

As we name what lingers in the air, we can explore new ways of living with each other. In her blog post, “9 avenues toward racial reconciliation,” Mennonite author April Yamasaki suggests a few specific actions we can take. Start with listening, she writes, which can be a form of active engagement. “Instead of assuming you already know, take on a posture of learning.”

She acknowledges that there is hard work ahead. “In the work of racial reconciliation, we need prayer and discernment to know when to be silent and simply listen; when to speak up, and how to do that without speaking over; how to act as partners instead of ignoring or lording it over one another; how to read Scripture and live deliberately as Scripture teaches; to be led by God and sustained by the Spirit.”

Canadian author Desmond Cole suggests, “Find the ways that you can support these struggles in your own communities. . . .  You don’t have to go somewhere else to make a change, you don’t have to even be standing out on the street waving a placard to make change. Supporting black people and black struggles in your own community is the way we can all [make] a difference.”

The pain of racism lingers in the air we breathe. How will the Canadian Mennonite church respond?

To learn more, visit commonword.ca and search for resources on racism and anti-racism.

Read more editorials:
Our fathers
Some things that need to be said
Testing the ties that bind
Beyond ourselves
The church has left the building 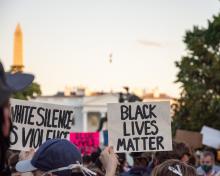 An image from a Black Lives Matter protest in Washington, D.C. (Photo by Koshu Kunii/Unsplash)

As the Executive Editor of the Canadian Mennonite, you have the opportunity to actually affect change and yet you do not. Part of the dominant white culture oppressing people of colour is the idea that we all have the right to express our opinion (or freedom of speech), even if it reinforces white supremacy. Just recently there was a letter published from a comment online (it is still prominently featured in the Readers Write section) called "'Decolonize’ and ‘settler’ meaningless, pejorative terms". This letter reinforces the underlying racism and disdain for Indigenous people in our society, and yet you print/feature it. Instead of propping up those who are part of the problem, how about silencing them? How about not giving them a platform or giving their ideas passive approval? If The Canadian Mennonite wishes to positively contribute to tearing down the idea of white supremacy, perhaps a good place to look first is within The Canadian Mennonite itself. You actually have the power to take away the voices of those who contribute to the oppression of people. Why are you not using it?

it is not part of the Canadian Mennonite's mandate to provide opportunity for woke progressives to practice cancel culture, which is a form of totalitarianism.

the canadian mennonite does demand courtesy, no ad hominen attacks; and that is part of a liberal tradition with roots in Christianity to allow all to speak.

what you are proposing is exclusionary, arbitrary and ultimately sinful. Discernment happens in dialogue and revelation, not suppression.

there are writers and even the editors of Canadian Mennonite that i disagree with; but! i will defend their right to hold convictions i disagree with and publish them!