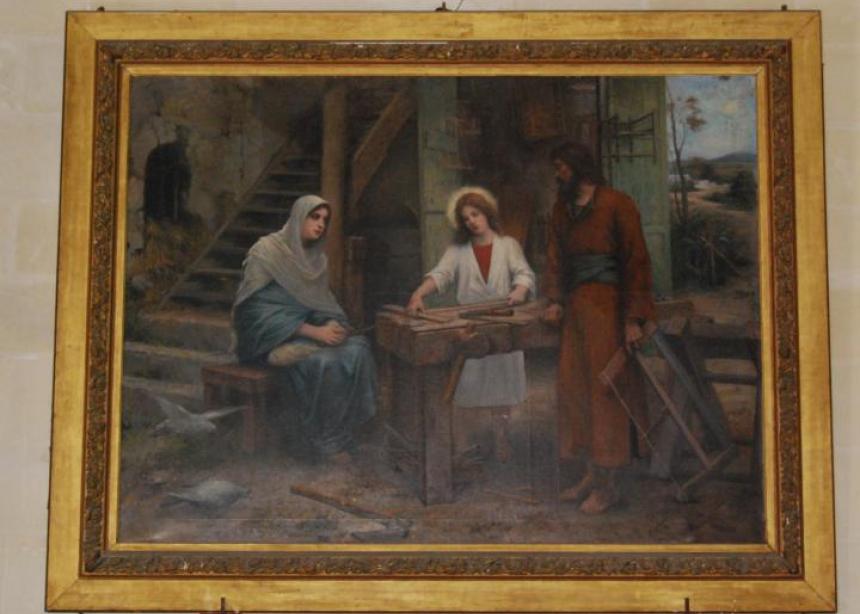 Virginia A. Hostetler encountered this painting of the Holy Family while living in Nazareth years ago. It hangs in St. Joseph's Church. (Photo courtesy of BibleWalks.com)

Mother’s Day is past, and Pentecost and Father’s Day are still ahead. In this in-between time, I’ve been considering the ways in which we describe God. Humans long to know, to understand and to name God. But how can mortal imaginations grasp the Eternal One?

In the Hebrew Scriptures, the Divine Presence manifests itself as a burning bush, a pillar of fire and a cloud of smoke. The New Testament indicates the presence of the Holy Spirit through vivid images: a dove, a gust of wind and a flame of fire.

Female images for God appear in scriptures, but it is only in recent years that Mennonite worship has included some of the divine characteristics traditionally associated with a mother: the creating, the womb-love, the birthing and the nourishing. Some of the newer hymns have expanded our insights into these vital aspects of the Holy One, and we are able to pray to God as a loving mother.

The story of the Prodigal Son (or the forgiving father) captures much of God’s nature as a loving parent. (A devout friend of mine claims that if all we had of scripture was this story, we could understand the entire message of salvation.) The willingness to let one’s child make his own choices while absorbing the pain of separation, the patient waiting, the forgiveness, and the joy at restored relationships—all of these depict the best in an earthly father and offer key glimpses into our Heavenly Father.

For some of us, thinking of God as a father brings comfort, as we recall the loving influence of our own fathers. Yes, Dad was not perfect, but we remember his steady presence, his guidance, and his provision. But for others, thinking of God as a father brings discomfort, because they remember a father who was absent, either physically or emotionally, a father struggling with illness or addictions, or a father who wielded power in abusive ways. And there are those among us who long to be fathers but cannot have that life-changing experience. When we refer to the fatherly aspects of God, we must acknowledge these realities.

Years ago, while living in Nazareth, I encountered a striking icon of the Holy Family. They are outside the city, Mary walking alongside her husband. Joseph ably carries the child Jesus on his shoulders. In a painting in a church commemorating the earthly father of Jesus, Joseph stands with the young Jesus at a carpenter’s bench, teaching him how to use the tools. A statue nearby shows Joseph standing behind his son, his hand gently resting upon the boy’s shoulder.

What might this first-century father teach the fathers of today? How might the church equip boys and men to live more fully into the high calling of fatherhood? I have seen school programs that help young boys learn how to hold babies and interact with them. In my congregation, young men teach faith formation classes for young children and youth, at the same time cultivating their own abilities to nurture and guide. I know of single fathers who, without a partner, struggle courageously to raise children and who receive advice and support from their community.

As Father’s Day approaches, let’s remember to support and affirm the fathers in our midst. How might that happen in your community?

Read more editorials:
Some things that need to be said
Testing the ties that bind
Beyond ourselves
The church has left the building
Chequebook and calendar 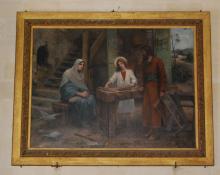 Virginia A. Hostetler encountered this painting of the Holy Family while living in Nazareth years ago. It hangs in St. Joseph's Church. (Photo courtesy of BibleWalks.com)