Or, how might an Anabaptist respond to the Russian invasion of Ukraine? 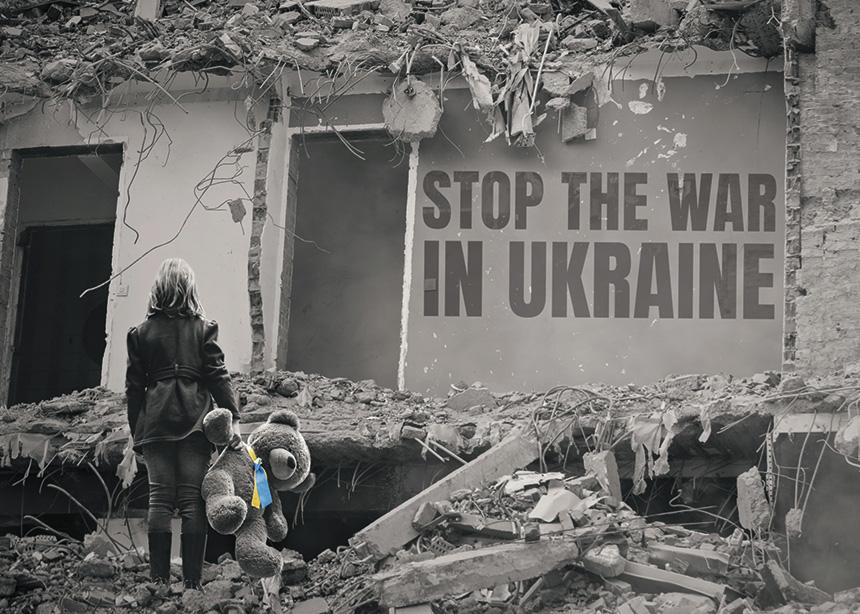 Sadly, it is too late for either a nonviolent approach or a more violent approach with a no-fly zone to quickly restore Ukrainian rights. It is impossible for any approach to take away damage to a house after it has been burning for some time. (Pixabay photo by dangrafart)

As Christians rooted in the Anabaptist tradition, we care deeply about every human being on Earth. We no doubt have felt solidarity with Ukrainians as they struggle against violence and injustice from military invasion. Engaging in constant prayer and giving abundant contributions of spiritual and material aid to victims are very important. Still, we long for doing more to confront the daily monstrosities of military aggression and to support the human beings who face deadly violence.

What else can we do?

We can more deeply explore how following Jesus might contribute, not to unrealistic hopes of melting the hardened hearts of today’s pharaohs, but to realistic possibilities for changing our way of living in today’s international system, because that system made Russian President Vladimir Putin possible, it made the war in Ukraine likely, and now it makes the prompt achievement of an equitable peace difficult and unlikely.

If this war could have been prevented through non-military means, as is certainly plausible, we have a duty to God and to Ukrainians and Russians, whose blood is being shed, to re-examine our way of doing international relations. If we view complicated military, political and economic relations among nations primarily through the lens of military logic, we will be inclined to believe conventional wisdom that the only way to stop aggressive military power is with defensive military power.

On the other hand, if we view international relations through an Anabaptist lens of following Jesus in responding to imperial military power, we discover some other, more promising measures for addressing overwhelming military might.

If implemented, these would enable peacebuilders to be both ethically faithful and politically responsible, rather than to be content, as many citizens feel they are forced to be, with emphasizing only one approach.

This “following Jesus approach” can be summarized in five statements:

Yet, he also said we are to live out his kingdom here and now, in this world. This may be one reason our parents taught us: “Be in the world (acting now), but not of the world (not imitating our society).”

Jesus apparently came to this position during his 40 days in the wilderness while facing serious temptations to assume political power, as described in Luke 4:1-13 and Matthew 4:1-11. Jesus responded with a clear “no” to the devil’s tempting offer to put magnificent political power in Jesus’ hands if only he would scale back the reign of God as the highest authority in his life.

If you and I follow Jesus in resisting this devilish temptation to become attached to political power, we would give up our attachment to today’s militarized balance-of-power system, an international system that is far more prone to war than necessary.

On the contrary, we should strongly resist misconduct and injustice by supporting an expanded rule of law and overcoming evil with good (Romans 12:21). In a nutshell, Anabaptists oppose the violence of war as strongly as they can without using violence to counter it, because that seems in accord with what Jesus did.

As an example, Anabaptists can aid interested Ukrainians (and Russians) to develop effective measures of civil resistance to discourage and possibly reverse Russian occupation. Ukrainians might adapt some measures from the experience in neighbouring Poland, where Lech Walesa and the Solidarity movement ousted a communist government and authoritarian military in 1989.

As Erica Chenoweth and Maria Stephan have shown, in Why Civil Resistance Works: The Strategic Logic of Nonviolent Conflict, research comparing all extensive violent and nonviolent resistance campaigns in the 20th century, civil resistance—although no panacea—actually has worked better than military resistance in ousting oppressive rulers, especially when a large percentage of citizens agree on the goal.

Jesus also seemed intent on preventing violent acts from leading to a cycle of more violence: “Those who take the sword will perish by the sword.”

When Jesus faced betrayal and the prospect of being killed, he and his disciples did not fight or kill anyone to try to help Jesus escape or to save his life, even though he was innocent of wrongdoing and did not deserve to die. So, the familiar argument that we should be willing to kill others in order to protect the innocent seems not to have been a compelling argument for Jesus.

In sum, Anabaptists follow Jesus by resisting the temptation to become attached to worldly power and by not killing to oppose adversaries or to express compassion for friends. Let us now look briefly at two concerns that arise from following Jesus in not killing others:

Once these could be established, there should be far less danger for people who would live in a system of enhanced global governance than for those who now live in the existing international system, which has enabled the destruction of Ukraine and risks even worse destruction with the possibility of nuclear war and the current certainty of melting polar ice caps.

There are not enough peacebuilders in the world today, including Anabaptists and others, to assert sufficient political pressure on foot-dragging governments to establish the global governance necessary for dependable peacekeeping but, if and when there are enough, global governance probably could be realized.

Sadly, it is too late for either a nonviolent approach or a more violent approach with a no-fly zone to quickly restore Ukrainian rights. It is impossible for any approach to take away damage to a house after it has been burning for some time.

These would include peacebuilding initiatives, such as strengthened international law and multilateral law-enforcing institutions, verifiable and enforceable arms control and disarmament measures, international economic integration and preplanned sanctions to constrain outlier governments, and detailed worldwide arrangements to resist any illegal usurpation of power and stop initiatives toward military aggression.

Humanity has not yet done these things because many decision-makers, especially in the great powers and the highly dissatisfied states, are too focused on military preparedness as the main instrument to maintain their national security, rather than building human security for all. Yet the preparations for war, with which we are familiar, do not produce nearly the same fireproofing results as would preparations to maintain peace, with which we are not familiar.

Within countries, we keep peace through a legal system with help from representative government, checks and balances, and carefully overseen institutions for law enforcement. We could keep peace internationally in analogous ways, but we do not. Not because it would be impossible, but because we have lacked willingness to put such a peaceful legal system in place. We see a tiny part of what could be done by observing the influence of economic sanctions and international law in resisting aggression in Ukraine now.

How effective these may turn out to be will be determined by how seriously and strictly the United States and other allies implement them, maintain them, and relate their squeeze to bringing conduct into conformity with existing laws against committing aggression, killing civilians and changing national boundaries through the use of force.

For peacebuilding to succeed, more people need to understand, build faith in, and implement peacebuilding initiatives that can effectively enforce international law. Also, citizens need to redirect the priorities of many decisionmakers who, as Luke indicated that the devil understands, are enamoured with their own political power.

Skeptics of Jesus’ way of love including law have long felt certain that it would not be practical or politically responsible. The Zealots, for example, hoped that the Messiah would be a great military leader who would free the Jewish homeland from Roman occupation. As the military aggressors in Jesus’ neighbourhood, the Romans played a role analogous to that now being attempted by the Russian army in Ukraine. Yet Jesus did not endorse the Zealots’ violent insurrection against the Roman military aggressors.

We can learn from understanding that, throughout most of nearly 3,000 years of human history, people habitually asked, “Who shall be our king?” Humanity struggled for some years before an answer to that question became clear, and democratic institutions were very widely established to replace monarchs. But eventually, most people have come to believe that powerful kings are no longer a good idea, even though there were a few relatively good ones.

Early Anabaptists also thought about the appropriate role for a king. Their position was: “God is our only king. We recognize no other final authority over us.” That conclusion was a secondary reason for opposition to infant baptism: It was a marker of citizenship and of loyalty to the prince.

As long wars in Afghanistan, Iraq, Syria, Vietnam and elsewhere have demonstrated, war has lost much of its ability to produce good political outcomes, even against weaker military opponents. This may yet be demonstrated in Ukraine, because, win or lose, Russian officials have surely undermined their goal of bringing the Ukrainians willingly or joyfully into a positive relationship with Russia.

Peacebuilders of diverse theological persuasions and faith traditions are coming to believe that, if enough people choose, they can model a way of living that shows how to loosen human attachment to the power of armies, how to transform the existing militarized international system, and how to build a rule of law to prevent war and to serve the “least of these.” For us to make a deeper commitment to live as such a transformative people could be one part of our calling to respond to the violence in Ukraine.

Robert C. Johansen is professor emeritus of political science and peace studies at the University of Notre Dame and co-founder of the Kroc Institute for International Peace Studies. His most recent book is Where the Evidence Leads: A Realistic Strategy for Peace and Human Security (Oxford University Press, 2021). A version of this article was published in the May 2022 issue of Messenger, a publication of the Church of the Brethren. Reprinted with permission.

1. What emotions has the war in Ukraine evoked in you? What are the images or stories that you will remember? What actions have you taken in response to the war? What is the appropriate action for Canada and other western countries?

2. Robert Johansen says it is plausible that the war in Ukraine “could have been prevented through non-military means.” Do you agree? What does he mean by his phrase that we could “view international relations through an Anabaptist lens”?

3. Johansen suggests that “the rule of international law and global institutions designed to prevent war and gross violation of human rights” could replace military force to maintain order in the world. Do you agree? What would need to happen to make military violence obsolete?

4. Where have you seen peacebuilding at work in the world? How should peacebuilders measure whether or not they have been effective? What can Mennonites in Canada do to “loosen human attachment to the power of armies”?

This article appears in the June 13, 2022 print issue, with the headline “What is a Christlike response to overwhelming military might?”

Related article:
Is violence the best response to Putin? 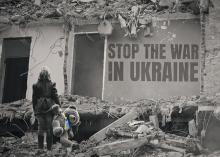 Sadly, it is too late for either a nonviolent approach or a more violent approach with a no-fly zone to quickly restore Ukrainian rights. It is impossible for any approach to take away damage to a house after it has been burning for some time. (Pixabay photo by dangrafart) 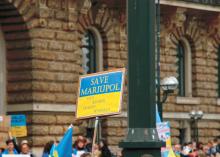