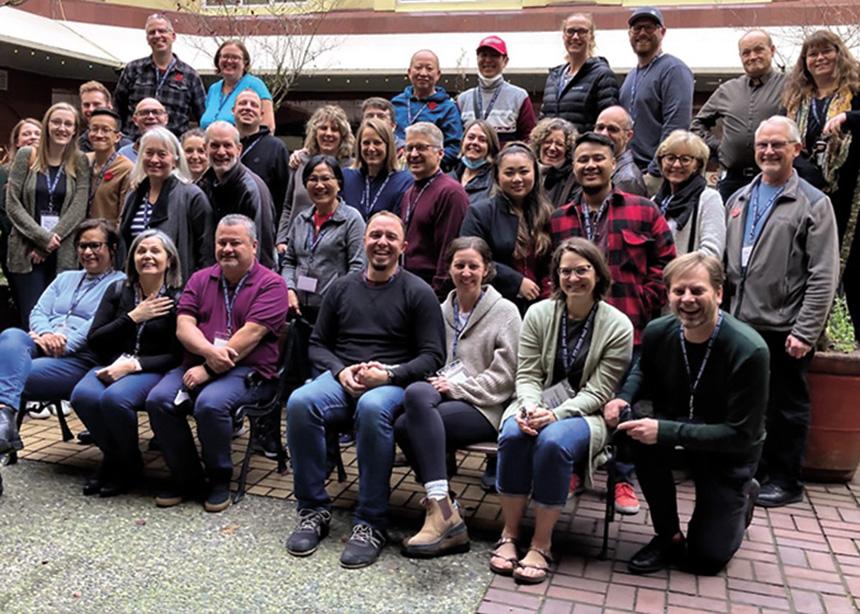 Although Mennonite Church B.C. delegates had to meet virtually this year for their annual general meeting, pastors and families were glad to meet in person for a retreat at Harrison Lake last November. (Photos by Ken Dueck)

With the theme taken from Romans 15:13, “What gives us hope?” Mennonite Church B.C. conducted its annual meeting on Feb. 26 via Zoom. This was the second year for the church gathering to be online instead of the pre-pandemic face-to-face gatherings. Delegates numbered 122.

“We’re all searching for meaningful connections,” said moderator Gerry Grunau in his opening statement. He noted the current events involving the invasion of Ukraine, saying that many ancestors and current family members of those present came from Ukraine, as he prayed for the situation there. He also read the regional church’s Indigenous land acknowledgment adopted in 2021.

As in 2021, delegates could view reports on video before the meeting, and a pictorial montage during the meeting honoured those from MC B.C. churches who died during the past year.

Representatives from MC B.C. congregations who formally closed their doors in 2021—Living Stones Chinese Mennonite Church and Northgate Anabaptist Fellowship—expressed words of farewell and gratitude for their time in the regional church, and executive minister Garry Janzen led a litany of blessing for them.

Turning to business, the delegate body approved resolutions regarding organizational restructuring, as discussed at the 2021 meeting. The new structure calls for task groups, rather than long-term standing committees, to carry out specific projects.

As explained in the report from the Leadership Board: “The significant shift in our organizational restructuring was formulating task groups to engage in activities more focused on specific purposes. There are now many more persons [65] involved in MC B.C. task groups and committees than had participated on the previous committees [43]. Feedback on the benefits associated with task groups has been:

Some attendees expressed regret that the change to specific task groups involves less regular and personal contact with a wider group of people.

Cheryl Berto of Living Hope Christian Fellowship said she wishes she could still meet face to face with more people a few times a year. “I really miss the feedback from other people; I feel disconnected from people not in my ministry,” she said. “I feel the loss of not having opportunity to have that perspective. Zoom is not same experience!”

Delegates passed a resolution asking for 65 percent approval to pass the restructuring proposal. They also passed resolutions regarding final approval for the organizational restructuring proposal presented at the 2021 annual meeting as identified in the 2022 MC B.C. organizational framework and procedural guidelines; and that the regional church bylaws be amended to incorporate the organizational framework and procedural guidelines dated February 2022. The new bylaws will be presented for adoption to delegates at the 2023 annual meeting.

Financial statements and budgets from MC B.C. and Camp Squeah were also approved. According to the finance committee report, the regional church showed net income, after transfers, of $53,112 for 2021 and, “the 2022 budget is based on the assumption that revenue and expense levels will remain close to those in 2021.” The report goes on to state: “the proposed budget continues to provide a $100,000 subsidy to Columbia Bible College, as we have in previous years” and projects a net deficit of $51,409.

Five individuals who began MC B.C. pastoral roles this past year were introduced:

In keeping with the theme of the day, each gave a brief video presentation on “My hopes for MC B.C.”

Camp Squeah director Rob Tiessen reported a good year at the camp, despite pandemic limitations. Added bonuses included the youth hockey team that had sheltered at the camp during the floods in November offering to come clean up trails as a thank you, and a generous donor who gave the camp a significant donation to pay off debt.

With Garry Janzen planning to retire this summer after 15 years as executive minister, Darnell Barkman of the five-member task group searching for his replacement reported on the group’s progress. The group announced they had upcoming interviews with potential candidates.

“There was a generous feeling seeping through the Zoom screens at the MC B.C. AGM,” commented Gerry Grunau after the meeting. “The delegates were positive about the feedback on the organizational restructuring proposal conditionally approved last year and resoundingly said ‘proceed.’ We felt God’s blessings on our morning together.”

Other online comments following the meeting included: “So glad to be a part of MC B.C. A great sense of unity in the meeting today and I’m so thankful for that,” and, “What a grace-filled communal gathering to come and decide matters to bring God’s kingdom here.”

This article appears in the March 21, 2022 print issue, with the headline “‘What gives us hope?’” Do you have a story idea about Mennonites in B.C.? Send it to Amy Rinner Waddell at bc@canadianmennonite.org. 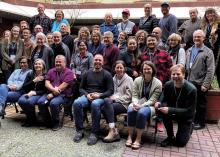 Although Mennonite Church B.C. delegates had to meet virtually this year for their annual general meeting, pastors and families were glad to meet in person for a retreat at Harrison Lake last November. (Photos by Ken Dueck) 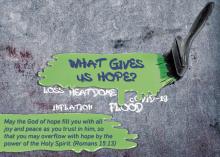 ‘What gives us hope?’ was the theme for the annual gathering of Mennonite Church B.C., held by Zoom on Feb. 26.