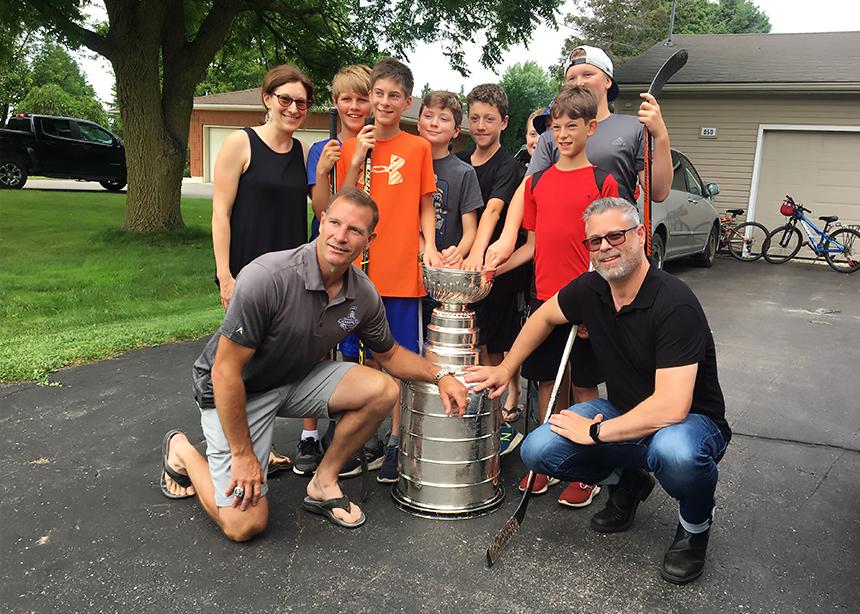 An encounter with the Stanley Cup led columnist Troy Watson (right, kneeling) to wonder: "What do I ‘live out loud’ to my neighbours and the people at places I frequent?"

Recently, a Kubota utility vehicle pulled into my driveway where my sons and their friends were playing hockey. Out popped Tim Taylor, a former NHL player and two-time Stanley Cup champion, holding the Stanley Cup. He put it in the middle of our driveway where we all took turns touching it, kissing it and drinking from it. It was a surreal experience, to say the least. How did this happen?

The day before, Tim contacted me to ask if he could bring the Stanley Cup to our house. Tim works for the 2019 Stanley Cup-winning St. Louis Blues as director of player development. (Every player and senior staff member on the team gets the Cup for a day. This was Tim’s day.)

I was as surprised by this request as anyone. Tim and I are not buddies. He didn’t even know who I was. We live in the same neighbourhood, though, about seven houses apart, and he told me he noticed my sons were always out on our driveway playing hockey, whether it was snowing, raining or the middle of a heat wave. He said their passion and love for the game is what hockey is all about—so he wanted to surprise our boys by bringing the Stanley Cup to our driveway when they were playing hockey. We arranged a time the next day and I made sure Elias and Cai were out there playing hockey with some friends.

A reporter for the local Stratford paper asked me, “How did Tim know your sons loved hockey so much?”

“Because their love for hockey is something they live out loud,” I replied.

Our neighbours notice what we’re passionate about. They see what we love by what we “live out loud.” I began wondering, “What do I ‘live out loud’ to my neighbours and the people at places I frequent?”

The second big surprise that happened to me was not as glamorous. In fact, it’s a little embarrassing. We went to Canada’s Wonderland as a family. We were all excited to hit the big rides, namely, Behemoth, Leviathan and Yukon Striker. I had not been on a roller coaster since my sons were born but I often told them how much I loved roller coasters. The bigger and faster the better! Now finally we were going to ride one together.

Much to my surprise, I got off the first ride feeling queasy. Shake it off, Troy. You got this. Halfway through the next ride, the Behemoth, I felt like I was going to throw up. What was going on? I told my family to go on the next ride without me. I needed some time to settle my stomach.

“But you love roller coasters, Dad!”

After a few hours, I rode the Yukon Striker and then after a few more hours of recuperation I rode Leviathan, just to say I did. But clearly my relationship with roller coasters had changed. To say I love riding roller coasters simply isn’t true anymore.

I realized there are probably other things I say I love, out of habit or based on history, that do not reflect my current reality if I were honest. For example, there are more than a few foods I insist I still love, and keep being tempted by, because I used to enjoy them as a youngster, but now whenever I eat them I feel gross and get heartburn.

What other things, activities or interests do I tell myself I love because I subconsciously believe that is what a “real man” or a “real Christian” or “real smart person” would love and enjoy? What other scripts, beliefs, worship songs, theologies and biblical interpretations am I holding on to—that I need to let go of—to be authentic as the person I am today, in 2019?

It’s okay that 46-year-old Troy no longer enjoys roller coasters. It's more than okay—it’s honest. It’s living in the truth. And that is what sets us free.

Read more Life in the Postmodern Shift columns by Troy Watson:
Reaching out requires letting in
Healthy interpersonal confession
What 'confessing your sins to one another' isn't
Confession as a personal spiritual practice
Worship as an act of loving God 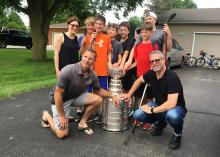 An encounter with the Stanley Cup led columnist Troy Watson (right, kneeling) to wonder: "What do I ‘live out loud’ to my neighbours and the people at places I frequent?"