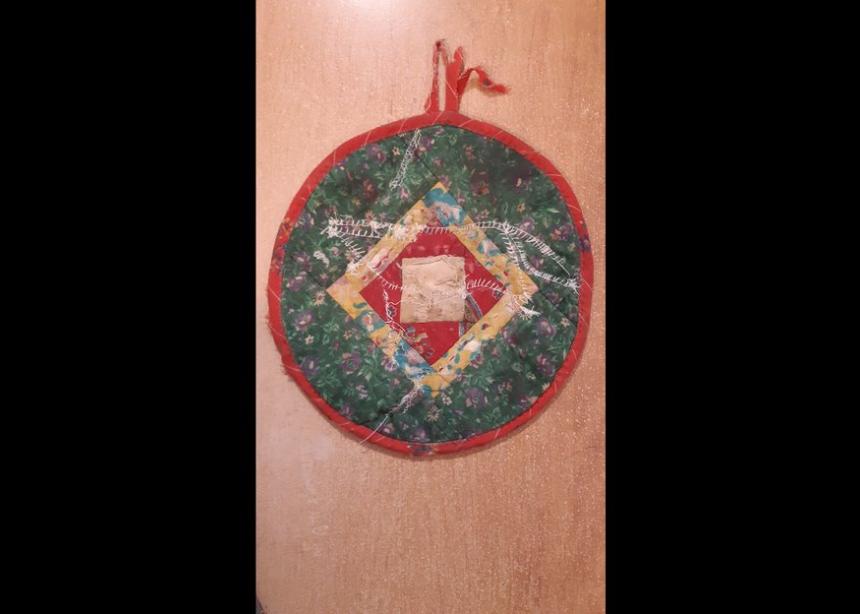 A thoroughly ragged and stained potholder has hung next to my kitchen stove ever since 1988. It was stitched together from scraps of cloth by some unknown Pennsylvania Mennonite. In those days, a group of women made potholders for every person who came through Akron, Pa., for a Mennonite Central Committee (MCC) orientation before a term of service.

Regardless of where I’ve lived over those years, that potholder has hung on the wall next to the stove. Increasingly worse for wear, it shows the marks of curry spice, raspberry pudding and dashes of oil. It is seared from being placed on a still-hot burner. One housemate thought roughly stitching up the holes with white thread on that red and green cloth would be a nice thing to do.

The potholder is a constant reminder of the life-changing experience that transformed who I am as a follower of Jesus. Like many others in our churches at the time, I did a term of voluntary service with MCC. I had considered the Peace Corps, but I didn’t want Uncle Sam to get the credit for my good works. Yes, I am an American. I wanted an international experience, so MCC sent me to Canada!

In fairness, MCC sent me to northern Saskatchewan, to live in a mixed-culture community of town and adjacent First Nation reserve. While there, I served with a youth drop-in centre and street program. Public awareness of residential schools was just beginning.

I learned a lot about the dark underbelly of Canadian society and its racism, Indigenous peoples’ resilience, and ongoing social problems. It was not an easy assignment. I was terribly unprepared to do such service.

That was not MCC’s fault. It was because I was a privileged, young American boy. It forever altered my life’s path—the least of which is that I have been in Canada for all but three years ever since. More importantly, I learned that individual ministry requires addressing social injustice, too.

I support MCC’s greater focus on local partners rather than sending North American volunteers. It’s more efficient. It’s less paternal, although MCC has always had a top-tier reputation for the way it worked with people at project sites. It was getting harder to fill available positions. But we have to ask: What happens if experiencing MCC service is no longer “teaching” many in our congregations?

The most profound forms of learning are often experiential. This is especially important for adult learners. Sometimes such occurrences can be transformational learning. That is a life-changing and deeply persistent new way of being, rather than just acquisition of knowledge.

According to research in this field of learning theory, to be truly “transformed by the renewing of our minds” (Romans 12) requires three elements: awareness of the problems of existing practices or the dominant culture; an alternative vision; and opportunities to directly experience alternatives in practice.

The first two tasks are relatively easy to do and can even happen in classrooms.

But what volunteers learned from their experiences changed the cultures of our congregations. They normalized the active service for which Mennonites are known. They informed our global awareness. The stories shared and lessons learned have been passed on to others in the pews. Other churches, though, do not have this culture of service and global citizenship. In MCC’s centennial year we need to ponder what transformative experiences will continue to shape us.

Randy Haluza-DeLay teaches at The King’s University in Edmonton and served with MCC in La Ronge, Sask., from 1988 to 1990.