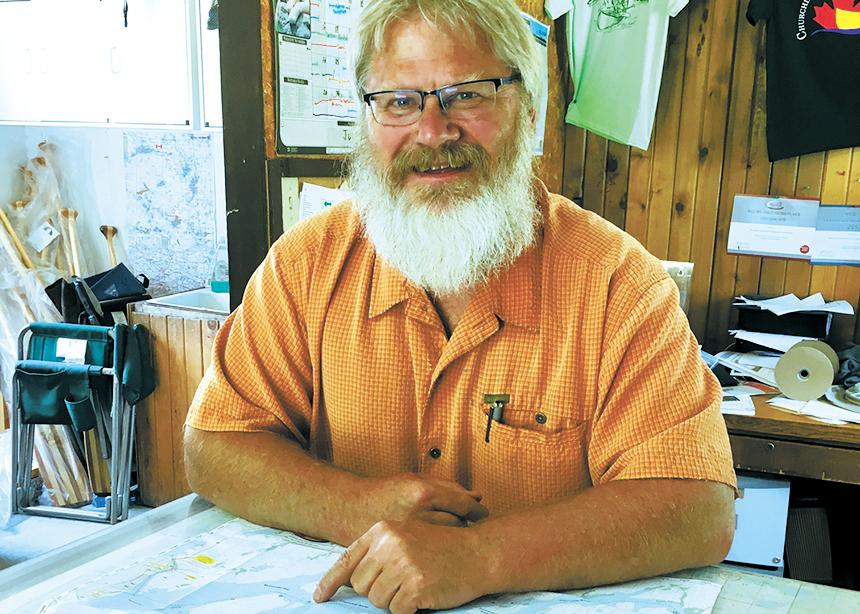 Driediger, who lives in Rosthern, is pastor of Langham Mennonite Fellowship during the winter months. From May to the middle of October, he operates Churchill River Canoe Outfitters some 470 kilometres north of Langham in Missinipe. (See more at “40 years of canoe tripping.”)

Every summer, his clients ask him what he does all winter. He says he used to tell them, “I keep myself busy.” But now that he has a contract with Langham Mennonite Fellowship, he thought it was time to own up to his other vocation.

“I was shocked at the response,” he confesses. While time doesn’t always allow for in-depth conversations, he finds that “I’m a pastor” often elicits a lot of questions.

“What church do you pastor?” they most often ask. When told, they often respond with, “What do Mennonites believe?” And when Driediger goes on to explain about Mennonites’ emphasis on nonviolence, Jesus and the Sermon on the Mount, they sometimes further respond with questions like, “How is that different than anybody else?”

One man asked him, “What kind of Christian are you?” He seemed mistrustful and angry, says Driediger, although “he was not taking his anger out on me.” The man told Driediger about his mother and how she frequently told him he was going to hell, and that his children, likewise, were going to hell. If that was the kind of Christian Driediger was, this man wanted nothing to do with him.

“How do you answer that?” Driediger pondered. He assured the man that he wasn’t that kind of Christian, but he also gave him an invitation: “You’re going to be around for a while this summer. Why don’t you watch me?”

Once, when a family came into his office, and the mother learned that Driediger is a pastor, she responded, “There are so many things I’d like to talk to you about. Can we come over for dinner?” The woman and her family not only came for dinner but they also prepared the meal. When they gathered around the table, Driediger says that she asked if she could say the blessing. And looking around the table, she said, “Many hundreds of events have happened to bring us together here at this time. I can’t believe it was an accident. I attribute it to God and I thank God for that. Let’s eat.”

Driediger also established an interesting relationship with a Jewish woman. Once she learned he was a pastor, she shared with him about her struggles in the Jewish faith. “We had incredible conversations about Judaism and Christianity, and it only started once she found out that I’m a pastor,” he says.

He has also noticed that people talk about their canoeing experiences differently than they once did. “Their stories are much more pointed because they see me as someone who understands spirituality,” he says. “They either feel free to use that language because [they know] I’m a pastor, or they feel they have to. I hope it’s the former and not the latter.”

Instead of shutting down conversation, the three little words, “I’m a pastor,” have opened doors for Driediger. He wonders why this is so: “Is it the fact that I’m renting canoes to them, and so they don’t find me threatening?”

One of his Missinipe clients has visited his church in Langham. Driediger sees this as a good thing. This person “felt like there was a connection beyond what happened in Missinipe,” he says. 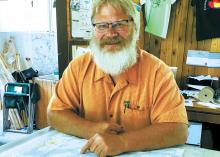 This article is an interesting little read. It is a testimony of the obvious. It is important to own who we are, without anxiety. "In quietness and trust is your strength," says the prophet Isaiah. And the outspoken impulsive disciple Peter, later become the Apostle Peter says, "Cast all your anxiety on Him..." (1 Pet 5:7). I recall a period of clinical training in a hospital setting in Edmonton. Our supervisor, Dr. Bill Schmidt, emphasized to us residents in pastoral care and counseling the importance of claiming our professional status among all the other professionals. "You represent God," he would say with a smile, "What other reason do you have for messing with peoples lives in and out of these medical units?" Not a good idea to keep that a secret.

I was moved by this article. More specifically, I am deeply grateful for Ric Driediger's personal testimony to his heritage of faith and his desire to live out his convictions. I hope he'll have many more encounters, behind the counter or behind the pulpit.

But one particular paragraph caught my attention: When asked what Mennonites believe, Driediger's first response was to explain Mennonites' emphasis on nonviolence and the Sermon on the Mount. That's exactly what I've done/said myself on a number of occasions when responding to the same question.

After seeing a plaque at Conrad Grebel College stating this very same Anabaptist distinctive, I tried to find out if it was true. This is important to me, since as a member of Conscience Canada, I am trying to find out why there is virtually no support for Conscience Canada's mandate from Mennonite church members. Last April, shortly after Easter, I sent an email to dozens and dozens of Mennonite churches and schools in Canada, asking if this belief still defines Mennonites, or Mennonitism. I hoped to gain some insight into whether or not Mennonites can genuinely be called a 'peace church.' Besides a single phone call to check the legitimacy of the email, I received less than a handful of responses, none of which opposed the work of Conscience Canada, but neither did they provide a response to my question as to whether we are still, in their experience, a legitimate peace church.

I am so glad that Driediger still believes that this is a point on which Mennonites may differ from other Christian denominations.