Steps on the path 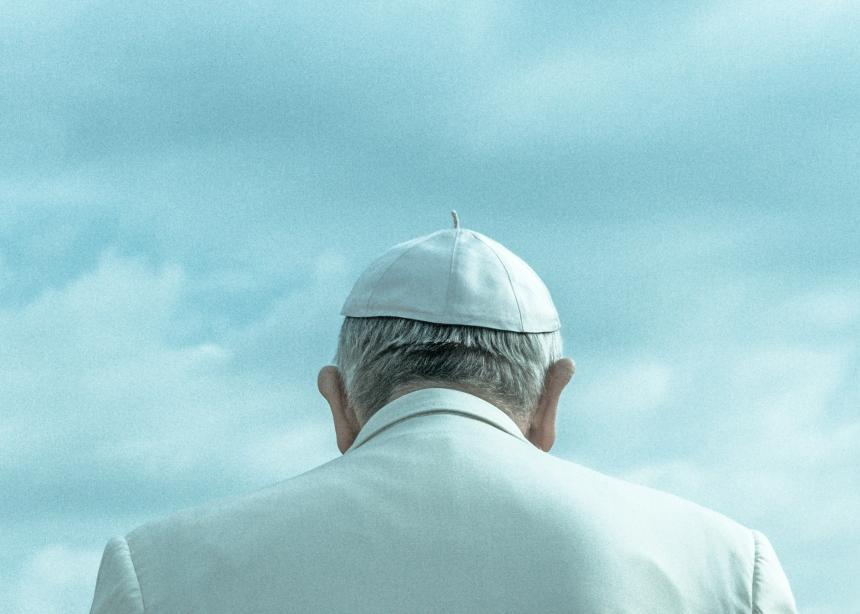 Pope Francis, pictured from behind in 2016. (Photo by Nacho Arteaga/Unsplash)

On April 1, 2022, the world witnessed a remarkable event. On that day Pope Francis addressed a group of Indigenous people with the words, “I am very sorry.”

Representatives of the Inuit, Metis and First Nations communities had come from Canada to Rome, meeting in smaller groups with representatives of the Vatican and sharing stories about the abuses suffered at residential schools run by the Catholic church. That final meeting included greetings, prayers, music, the exchange of gifts and an invitation for the Pope to visit Canada. There, he expressed sorrow and shame for the harmful actions members of the Catholic church had taken toward Indigenous people.

What does this have to do with Mennonites? As members of the larger Christian Church, Mennonites can see these meetings as an opportunity to watch, listen and learn—both about the wrongs Christians committed against the Indigenous community and about possible steps toward a better future.

While the Mennonite influence on residential schools in Canada was a lot less than the Catholics’, a handful of schools had Mennonite oversight or volunteers. These schools were part of the historical efforts of colonization by the larger Christian church. As part of that institution, we Mennonites have more work to do.

Mennonite Church Canada heads up the church’s nationwide Indigenous-settler Relations program, which offers a variety of resources for study and action. In various regions, Mennonites participate in efforts to advance toward justice and reconciliation.

In MC British Columbia, a nine-member Indigenous Relations Task Group is “committed to creative redemptive relationships between settler Mennonites and their Indigenous neighbours.” They identify three aspects to their efforts: listening, learning and advocacy. Elizabeth Epp, a member of group, says, “Reconciliation is hard work, and it begins by being honest and looking at our own histories and ways in which we have not lived fully into the calling that we have received as Jesus’ people and have been blind to some of our own shortcomings, recognizing how we too have participated in a mindset of colonization.”

The regional church includes a land acknowledgement on its website and in newsletters. The website includes practical help for how others might go about creating their own land acknowledgments.

In Manitoba, the Mennonite Coalition for Indigenous Solidarity, a partnership between MC Manitoba and Mennonite Central Committee (MCC) Manitoba, aims to help churches engage with Indigenous communities. The regional church has also participated in a broader cooperation with other Christians groups and Treaty Relations Commission of Manitoba to organize “We Are All Treaty People” celebrations.

For several years, Mennonites in Saskatchewan have collaborated with local Indigenous groups to hold friendship events that include food, music and dance. They see them as a way to build relationships of respect between Indigenous and non-Indigenous people.

They’re also working to identify and protect sites that have connection to Indigenous presence and history. A new film production is nearing completion and focuses on the Ancient Echoes Interpretive Centre near Herschel, Sask.

In Ontario, the MC Eastern Canada Truth and Reconciliation Working Group organized an online video series, “Treaty as Sacred Covenant,” still available for viewing through the website mcec.ca. Members of individual congregations offer support to 1492 Land Back Lane, a protest against development of Six Nations land near Caledonia, Ont.

In May Conrad Grebel University College will host a four-day conference, “Indigenous-Mennonite Encounters in Time and Place: A Gathering of Body, Mind and Spirit.” Sponsored jointly with MCC and the Institute of Anabaptist and Mennonite Studies, the event intends to “advance understanding on the part of Mennonites and other interested participants of their colonial histories, and is an effort to advance reconciliation and bring justice to Indigenous-settler relations.” (More information is at bit.ly/2UhmnHu.)

“There are still many steps to take to fix the relationship with the church,” said Phil Fontaine, an Indigenous leader and member of the delegation to Rome. The depth of pain and the long-lasting consequences of the church’s past actions require acts of justice and deep reconciliation. They require humility and courage on the part of all who commit to this path.

How will Mennonites continue to respond to the Calls to Action issued by the Truth and Reconciliation Commission? How will we live out Jesus’ message of good news as we walk alongside our Indigenous neighbours?

Read more editorials:
Trusting the Easter story
‘For the joy of ear and eye’
Two years in
Learning to listen
Citizens of a city on a hill

Pope Francis, pictured from behind in 2016. (Photo by Nacho Arteaga/Unsplash)

Yes, the Pope has "expressed sorrow and shame for the harmful actions members of the Catholic church had taken toward Indigenous peoples," and "Mennonites can see these meetings ... about the wrongs Christians committed against the Indigenous community," but it seems that the Mennonite wrongs regarding residential schools were not nearly on the scale of the Roman Catholic Church, we only destroyed hundreds of Indigenous lives, not hundreds of thousands.

When will MC Canada come to the realization that there is a tremendous evil which undergirds Mennonite Christianity operationalized in North America? We continue to build empire and live off of the avails of stolen lands and genocide. When will MC Church demand Mennonites give the land back?