In search of the holy grey 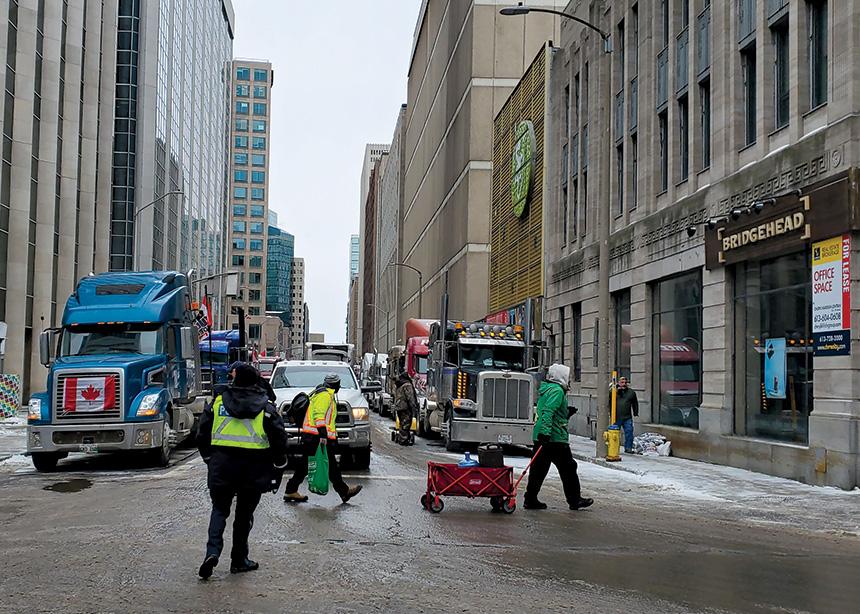 With the worst of the pandemic behind us—hopefully—how can the church help address the division left in its wake?

Those divisions were highlighted rather starkly by the truck convoys. And though the trucks have gone home, the fervour lives on. On both sides. Lines are drawn.

Officially, our denominational leaders were 100 percent onboard with government restrictions. Leaders said there should be no religious exemptions from COVID-19 vaccines, and they issued a terse “Statement on white nationalist symbols at ‘Freedom Rallies.’ ”

Of the 10 churches I spoke with last August, some reported no division—everyone was masked and vaxxed—some said they had lost members over restrictions and some were in between.

If we are to be candid, pandemic-related polarization in our denomination is surely reduced because some of the more conservative congregations and people have left in recent years. Still, there is certainly some division within our congregations, and plenty in the world we inhabit on weekdays.

The temptation is to oversimplify the division. I have talked to enough pro-restriction progressives to know there is an urge to paint all “anti-vaxxers” with a single conspiratorial, white nationalist-adjacent, anti-science brush. But I have also talked to enough people who question restrictions to know the lines are much more blurred.

The public discourse has tended to ignore the grey areas and the legitimate questions, preferring instead stark lines of division. To address polarization, I believe we must now create more room for grey.

The limits of welcome

Michael Pahl, executive minister of Mennonite Church Manitoba, leaves some room for grey, saying, “I can myself think of good reasons to be at least vaccine hesitant, and there is no doubt that pandemic protections have had some harmful effects on people and society (e.g., mental health, increased 'silo-ization' with inability to gather in person, etc.).”

But in response to my question about what churches can do to make people who have not been fully onboard with restrictions welcome, his reply was less grey. “We need to do what we can to ensure all people truly are welcome,” he said via email, “but if welcoming some puts vulnerable people—especially physical/mental health-vulnerable people—at risk of real harm, then those people cannot be fully welcome.”

If a church maintains a mask mandate, Pahl says those not willing to comply “should not be welcome to attend an in-person gathering.”

Still, he says that once the “temperature around all this starts to cool,” he would like to see congregations “make deliberate efforts to reach out to all among them, including both anti-protection folks and those most fearful of COVID.”

Church got ‘sucked in’

Marcus Rempel is credentialed by MC Manitoba while serving a small Anglican parish in Beausejour, Man. He is vaccinated and has used masks diligently but felt the level of state pressure was too easily adopted by churches.

As the pandemic lines hardened and narratives solidified, Rempel was aware of “credible, intelligent people” who differed with the mainstream view. One of those people was David Cayley who was involved in producing over 250 shows for the CBC radio program Ideas, including a major series entitled “How to Think About Science.”

On his personal website, Cayley has said that there should have been more debate about the pros and cons of lockdowns and more space for the credible scientific experts who questioned what so quickly became COVID orthodoxy. The lack of such space, he says, is contrary to the sciences, which, “by their nature, are plural, contestable and subject to endless messy revision.” For him, those who appealed dogmatically to “the science” were misguided. Without room for disagreement and debate, science becomes something else.

Rempel says he started to resent that people like Cayley were largely excluded by the media.

And he believes the church missed an opportunity to blaze a distinct path. He notes that early Christians were known for not being afraid of death. They cared for the ill, lepers, people who others considered untouchable. Now he says he feels like he has had an “allergic reaction to being told to relate to [his] neighbour by treating [his] neighbour as some kind of leper.”

Rempel feels there was “not nearly enough discomfort [in the church] about being willing to institute a passport system at the family gathering of Jesus.”

He says the church “got sucked into a monopolization of what loving your neighbour looks like, as dictated by the state.” And he felt there was little room for questions. In fact, the first time Rempel tried to raise some of these concerns with me in a social setting last summer, I shut him down. It was only later that I came to a point where I could appreciate the grey.

Another person in leadership in an MC Canada congregation chose not to raise concerns about church use of vaccine passports in these pages due to the sensitivity of the matter.

Leader of the divided

Marvin Plett navigates the sensitive grey areas around COVID-19 division in a different context. Plett is a longtime city councillor in Winkler, Man., where vaccine uptake is 46 percent. Early in the pandemic, his social media post about why he masked up drew a harsh response. In terms of online negativity directed at him and his colleagues, he says there is no comparison between the pandemic and the times prior.

Plett has tried hard to avoid negativity, focussing on kindness and common ground. We can all agree, Plett says, on the importance of “community, families, each other’s spiritual and mental wellness.” We need to be respectful of one another and listen to one another, he says. Plett invites discussion. “If you really listen to others,” he says, “you’ll find common points.”

He is concerned about the extent to which social media algorithms work against the creation of common ground and mutual respect. As a civic leader he has to do the opposite, seeking out and respecting the voices of all those he represents, and “always keeping in mind the people that are outside the majority. . . people who have not felt heard.”

Plett’s sense is that generally five to 10 percent of the population is at the far ends of the political or ideological spectrum. He feels those percentages have grown significantly during the pandemic. The hope now is to expand the middle.

In terms of getting back to normal, Plett sees this as a time to re-evaluate our values and perhaps improve on the previous normal. The values he points to are “kindness, caring, respect, empathy.” The pandemic has been hard on all of us, he says. “All of us were afraid of the unknown.” Different people responded in different ways. The question for him now is this: “Can we be gracious to one another?” 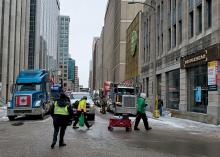 The church and Christianity, as they have evolved over time, lend themselves well to polarization. The requirement of faith/belief in the various tenets of Christianity such as original sin, atonement/salvation, messianism, etc., and the accompanying "you're either in or you're out," leaves little room for "grey areas" such as "how are you striving to be a good human being?"

An example from personal experience occurred in an adult Bible study I once attended. I foolishly insisted that God would welcome Gandhi (Hindu) with open arms into heaven. Perhaps it was my insistence, however after some discussion during which I refused to relinquish my position on Gandhi, the pastor quoted John 3:16 to me and informed me that I was headed straight to hell. No room for grey in that particular version of Christianity at that time, rather a binary, "in or out."

This kind of binary mindset lends itself well to polarization when issues such as the pandemic arise. The mindset of binary is already present, deeply ingrained through our Christianity/church, so all that remains is the specific aspects of how a person is disposed towards vaccinations, medical science, and government. Anyone with a different position is naturally identified as the other.

I don't know if the church "got sucked in" as such, rather that polarization and binary are the modus operandi of how Jesus is operationalized in modern Christianity.