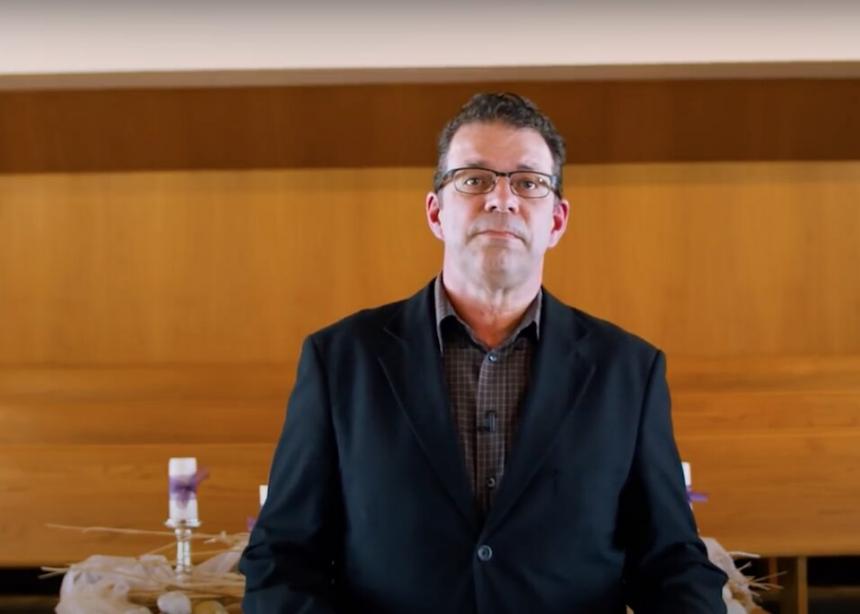 Doug Klassen, pictured in March 2020, is one of six Mennonite Church Canada leaders who made a statement on Sunday denouncing the white nationalism being expressed at protests across the country. (YouTube photo)

The day after thousands of truckers and other protesters converged on Parliament Hill to call for an end to COVID-19 mandates and other public health restrictions, Mennonite Church Canada’s executive ministers released a statement decrying the white nationalism being expressed at related protests that are springing up across the country.

It states the following:

“As leaders within Mennonite Church Canada, we unequivocally denounce the symbols, words and actions of white nationalism being expressed in Ottawa and across the country at ‘Freedom Rallies.’ While we support the right of people to gather peacefully in protest of government laws perceived to be unjust, we cannot support any action that promotes anti-Semitism, Islamophobia or racism. Jesus calls us to love our neighbours as ourselves as an expression of our love for God (Mark 12:29-31), across categories of race, ethnicity, religion and gender (Luke 10:25-37; Galatians 3:28). We call on all Christians to walk in Jesus’ way of love.”

The statement concludes by referencing Philippians 2:4-5:

“Let each of you look not to your own interests, but to the interests of others. Let the same mind be in you that was in Christ Jesus.”

Doug Klassen, pictured in March 2020, is one of six Mennonite Church Canada leaders who made a statement on Sunday denouncing the white nationalism being expressed at protests across the country. (YouTube photo)

While white nationalism is problematic for Canadians and Mennonite Canadians too, it would seem that by far the more pressing issue would be the "theft" and occupation of Indigenous lands in Manitoba since 1874. As it stands, Mennonite Church Canada and Mennonite Central Committee cannot be bothered to boldly acknowledge on their websites that their very office buildings are situated on Treaty lands.

By all means, let's voice the obvious improprieties such as white nationalism, that is the easy part, it is easy to point out the failings of others. However let's not forget the responsibility of Mennonite Church Canada and its constituency to live justly, and to seek reparation. There is still much injustice Mennonites need to answer for.

I'm not sure about other protests but I do know that an ever increasing percentage of Truck Drivers in Canada are NOT White...or express any views of White Nationalism. I'm not a truck driver but I employ 500 people and have a significant number of trucks and drivers in my manufacturing business docks every day...and I can tell you that a large percentage of these drivers are of East Indian, Mexican, and Russian origin. I think your assumptions are unjustified.

If in fact there is blatant white nationalism, I agree with the statement.

As a former owner-operator, I am appalled at waste of money and fuel, as though travelling across Canada to blow horns in Ottawa will gain respect.

I have written many blogposts giving very positive read to truckers. Not this time!

I am grateful for Mennonite Church Canada's statement against white supremacy, and for the comment here noting the many ways Mennonites across the Americas have both benefitted from white colonialism and advanced the ideology and theology of white supremacy.

Mennonites were at the forefront of publishing white supremacist newspapers and contributing to both the Nazi and white nationalist movements in North and South America, both in the past and the present.

Ben Klassen, who lived in Saskatchewan and Manitoba before relocating to the United States, coined the central term of the white nationalist movement when he called for a "racial holy war."

Robert Millar from Kitchener, Ont., established an underground railroad for white supremacists and had ties to Timothy McVeigh's bombing of Oklahoma City.

Ingrid Rimland, whose family was saved from Ukraine by Mennonite Central Committee, started the first website devoted to Holocaust denial.

For more details, see my article in Mennonite Life on this history: https://ml.bethelks.edu/2020/07/09/anabaptist-mennonite-relations-with-j...

Yikes your information is disturbing. Indeed, just like Mennonites in Russia, some of those families also spawned radical defectors from the faith, not only selbstschutz, but terrorists raising during those years.