The Vegetable Academy is a growing concern 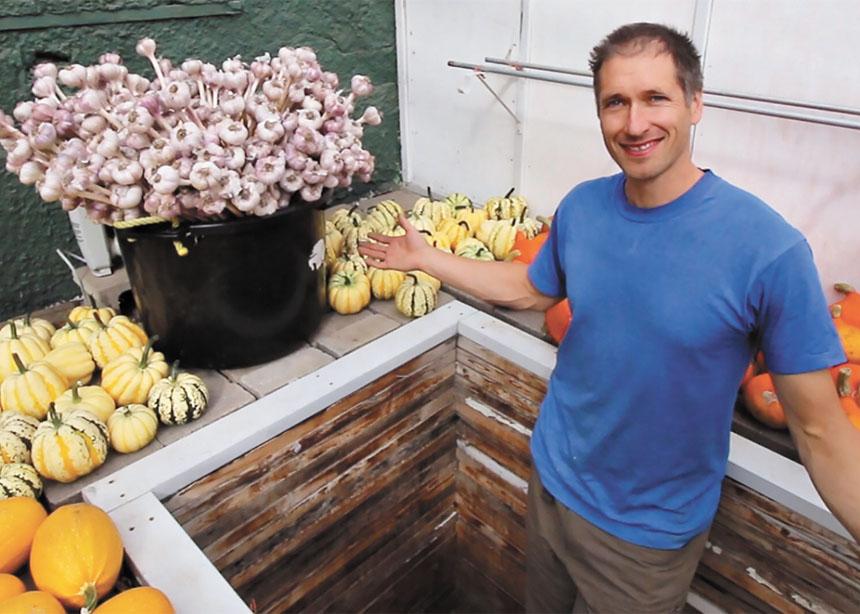 Jared Regier displays some of the fruits of his labour: winter squash and garlic, ready for storage. (Photo courtesy of Jared Regier)

The seed that eventually grew into the Vegetable Academy was planted when Jared Regier was a boy working, somewhat reluctantly, in his parents’ garden.

“Good food was always part of our home,” he says, and gardening was “an essential part of being human.”

Years later, Regier became a high-school teacher and established a home of his own, but gardening wasn’t initially part of that home. He remembers feeling embarrassed about going to the grocery story to buy carrots that tasted inferior to the ones his parents grew.

In the classroom, teaching ecology, Regier began thinking more about how closely food production is tied to the challenges of sustainability.

Eventually, Regier left his teaching career to become a market gardener. He called his venture Chain Reaction Urban Farm, although it wasn’t a farm in the traditional sense.

“There were no tractors, no sprawling acres of farmland,” he says. “It was all here in Saskatoon.” Regier farmed just fewer than 930 square metres in plots either in people’s backyards or along boulevards. He sold his organically grown produce through subscriptions and delivered it by bicycle.

“The idea started with all the questions I got,” he says. “I have a lot of plots that are very public—you can see the whole garden—and people often wanted to stop and chat.” When they asked him why they couldn’t get their home gardens to look like his, he realized there was a learning gap that he could fill.

“Seed to table,” the Vegetable Academy’s first online gardening course, launched in January with slightly more than a hundred registered learners. Most are from Saskatchewan, Manitoba and Alberta, but he also has participants from Ukraine, Mexico and Australia.

Some will be planting urban gardens, while others are setting up homestead gardens on acreages. Some are young novice gardeners, while others are retirees wanting to get back into gardening, he says. What they have in common is a commitment to growing their own food.

Regier, who attends Nutana Park Mennonite Church, sees food as a powerful vehicle for change that can have a far-reaching impact.

“Several times a day we get to use our forks to vote for the kind of world we want to live in,” he says. “When we make good food decisions, we nourish our bodies and elect to build healthier local ecosystems.” He adds, “The rewards are fast, the benefits are long lasting, and if we make a mistake, we get another chance to make better choices the next day.”

Regier sees growing good food sustainably and teaching others to do the same as an act of love for his neighbours and for future generations.

“My insistence on getting my hands dirty by growing my own food at home is an act of love that removes me from the industrial food system and its exploitation of ecosystems, people and energy reserves around the world,” he says, adding, “We don’t need bigger machinery or more sophisticated technology to correct the failings of our current food system. We simply need more educated people willing to do the work, and I happen to be well equipped to help with this transition.”

This article appears in the March 1, 2021 print issue, with the headline “The Vegetable Academy is a growing concern.” Do you have a story idea about Mennonites in Saskatchewan? Send it to Donna Schulz at sk@canadianmennonite.org. 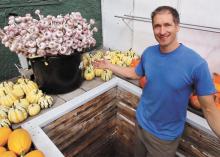 Jared Regier displays some of the fruits of his labour: winter squash and garlic, ready for storage. (Photo courtesy of Jared Regier) 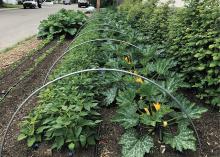 As Jared Regier worked in his market garden plots, people walking by would stop and ask him questions about gardening. This led to the creation of the Vegetable Academy. (Photo courtesy of Jared Regier) 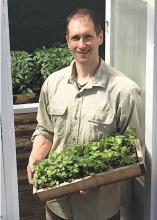 Jared Regier holds a tray of seedlings ready for transplant into his market garden. (Photo courtesy of Jared Regier) 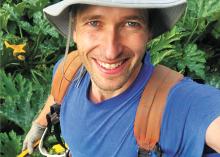