Fourteen Mennonites talk about the books that have impacted them 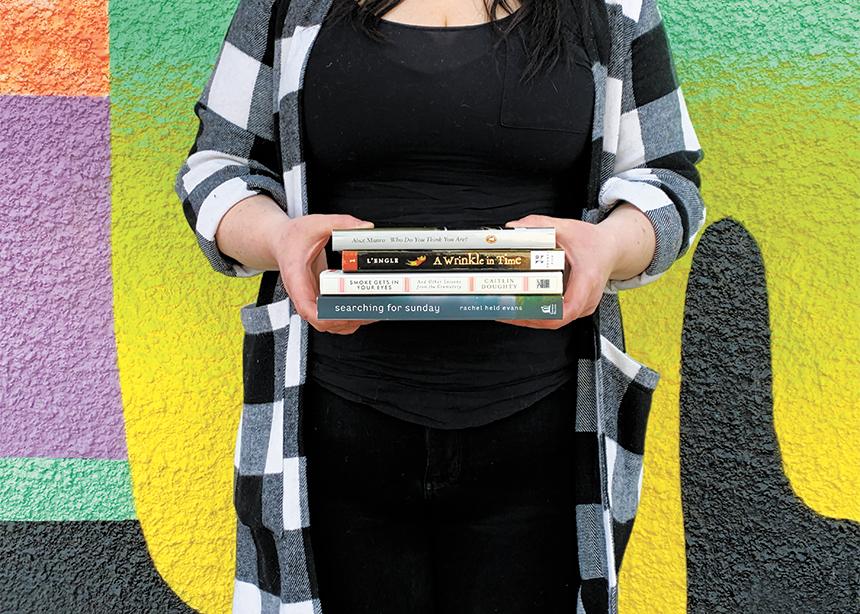 “Rainy days,” Calvin and Hobbes cartoonist Bill Watterson once wrote, “should be spent at home with a cup of tea and a good book.”

As part of Canadian Mennonite’s biannual Focus on Books & Resources section, the magazine spoke with 14 people about the novels, poetry collections and non-fiction works that have impacted them.

Consider spending time with one of these books the next time it rains.

“Generally I only read books once, but there is one that I’ve gone back to and re-read a number of times. It’s called A Severe Mercy by Sheldon Vanauken, and it’s a memoir. There are three parts to this book: the experience of love that the author and his wife share, their spiritual journey when they reach Oxford University, and their friendship with C.S. Lewis. I got this book when I was in my 20s and had just finished university. A close friend gave it to me for Christmas, so that’s one of the reasons I treasure the book.”

“I don’t have a favourite book, but almost every day my devotional reading—in addition to the Bible—is Charles F. Stanley’s Handbook for Christian Living: Biblical Answers to Life’s Tough Questions. I also enjoy God’s Story, Our Story: Exploring Christian Faith and Life by Michele Hershberger. It focuses on salvation, justification and sanctification, and the mission and the work of the Holy Spirit in our daily lives.”

“My favourite book is Internment by Samira Ahmed. It takes place in the United States, where they’re trying to cleanse the country of Muslims by placing them in internment camps. The book follows one Muslim girl as the prisoners start rebelling against the leaders of the camp and prove that they’re not a threat to America. It shows that if you have good friends and if you believe in yourself, you can do amazing things.”

“My favourite book is The Hate U Give by Angie Thomas. The main character, Starr, is Black, and she witnesses her best friend get shot by a white police officer. It’s really relevant to what is happening in the world now. I learned that you never know what somebody’s going through. No matter what’s happening in your life, you have to treat people with respect.”

“I’ve just recently read Peace by Chocolate: The Hadhad Family’s Remarkable Journey from Syria to Canada by Jon Tattrie. It’s about a Syrian family that was sponsored by a group in Antigonish, N.S., because of conflict back home. It’s a remarkable story of how these newcomers were able to start a chocolatier called Peace by Chocolate with the help of the community.”

“Toni Morrison’s novel A Mercy is a book I wish more people knew about. It’s a fairly short novel that takes place in the American colonies in the 1600s. The novel tells this incredible story of the moment in the history of North America where race and racism started to develop. It traces how this one household of people—including the family of a Dutch settler, an enslaved Black woman and an Indigenous woman—live together and work together and survive, but when conflict arises, they begin to conceptualize each other in these different categories, confronting readers with how racism developed to divide us. It’s a beautifully poetic novel, and deeply theological, but it’s also a much-needed reminder for white settler readers in North America of how we got where we are. I think Toni Morrison was the greatest 20th-century American novelist, full stop.”

“Smoke Gets In Your Eyes: And Other Lessons from the Crematory by Caitlin Doughty is my current favourite. Caitlin Doughty is a mortician and activist in the death-positive movement. This is her first book, and it’s made up of stories from when she was 24 and got her first job working in a crematory. She approaches death-related topics with a bluntness, rather than shame or taboo. As a society we hide from things, and it’s not necessarily good or healthy. Death is one of those things that I think should be a bit more normalized.”

“I recommend people read Rachel Held Evans. I’m currently working through Searching for Sunday: Loving, Leaving, and Finding the Church. I’ve really appreciated Rachel’s stories and words and theology, and how open she is about her faith journey. Even though she grew up evangelical, I think a lot of Mennonites would identify with her reflections.”

“One book that has really rocked my world in the last five or seven years or so is Things Hidden Since the Foundation of the World by René Girard. He was featured on CBC Radio’s Ideas program, and it just blew my mind. The book they referenced a lot in that series was Things Hidden Since the Foundation of the World. It’s helped me understand three things: the uniqueness of Jesus and the gospels, the uniqueness of how conflict works in the world, and how Jesus resolves that. It’s been key for me.”

“Questions I Asked My Mother by Di Brandt was my first favourite poetry book. It was sort of transformational to read this account of the coming of age of a Mennonite woman from a small Manitoba town. The poems are packed with doubt but also faith, and love but also anger, and shame and desire, and they’re all working at the same time. That’s when I really realized, oh, that’s what poetry can do—it can convey these extremely nuanced feelings in a way that allows all of them to exist at the same time.”

“I recommend the graphic novel You & a Bike & a Road by Eleanor Davis. She’s an acclaimed illustrator and cartoonist from the U.S. This book is a travelogue and memoir about her bike trip from her parents’ house in Tucson, Ariz., to her home in Athens, Ga. What I like about her work is that she’s always attentive to bigger structural problems, and how the systems that we’ve built don’t serve everyone equally—and in some cases do a lot of harm. At the same time, her work is accessible and beautifully drawn. She manages to keep the tone light while speaking movingly about her encounters with the world around her.”

“I’m working through Black Marxism: The Making of the Black Radical Tradition by Cedric J. Robinson. I think it’s a substantial text for particularly white and western Christians to deal with because it puts forward an account of truth and liberation that does not rely on the west or Christianity for its foundation and inspiration. I think if the western church is interested in reckoning with its historical position of supremacy, it needs to encounter other traditions, like Black traditions, Indigenous traditions, even various Islamic or eastern traditions, and be open to what they offer apart from our own sense of truth, justice, liberation and those kinds of things.”

Magdalene Redekop, 76
Professor emerita of English at the University of Toronto.

“There is no one novel that I most enjoyed teaching during my career, but I guess if I was pushed to choose one, I would choose Alice Munro’s Who Do You Think You Are? It’s a collection of short stories that make up a kind of novel. I think it’s Munro at her very, very best. It’s densely allusive but it has an incredible lightness—it’s as light as air. She’s a highly crafted writer who conceals her craft and sweeps you up in stories. Who Do You Think You Are? deals with violence and is a profound examination of power and class differences, especially in Ontario. I love all of Alice Munro’s work, but this is my favourite.”

“One novel that had a pretty significant impact on my spiritual formation, and how I think about God, the world and my place in it, is A Wrinkle in Time by Madeleine L’Engle. I probably read it when I was 11 or 12. It’s a fantasy adventure book where an ordinary girl has extraordinary things happen to her. In the book, there’s an understanding of the universe where God is a force for good at work in many ways, both large and small—in the large, cosmic universe around us and in the very small minutiae of day-to-day life. It was really significant and influential for me.”

1. What is your favourite kind of book to read? Are there any books that you find yourself reading over and over again? Do you have treasured books that are falling apart? What kind of books do you keep at your bedside?

2. What are you hoping to achieve when you read? For example, do you read mostly to escape into someone else’s world for a while, to impact your faith formation, or for knowledge and information? What are some reasons for starting a second book before the first one is finished?

3. How much do the books you read influence how you live your life? What book (other than the Bible) has most influenced your faith formation? If you could recommend a book to your 18-year-old self, what would it be?

4. Can you think of examples of poetry or fiction that have inspired you to faithful living? How do these genres work differently from traditional devotional or theological writing?

5. If you were able to write a book, what would it be about? What books have you given as gifts? 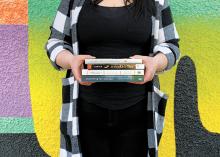 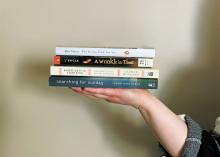 I absolutely loved this piece! The best part is that many of these books are available at my local library, while there are others here that I will definitely be buying. Please make this a regular feature. Thanks again :)

I'm making my way through 'Seduction of the Saints - Staying Pure In A World Of Deception' by Charles Crismier and highly recommend it. The signs are here that we're in the days spoken of in Jude and we need to be ready for what's more to come. This book invokes self examination, teaches critical thinking and discernment of truth in light of scripture, and encourages us in truth. All of this is so important in times like this, as we're rapidly moving towards the end of the age. Aside from that, no one is guaranteed a tomorrow anyways, and for that reason, we always need to be ready to meet our Maker.