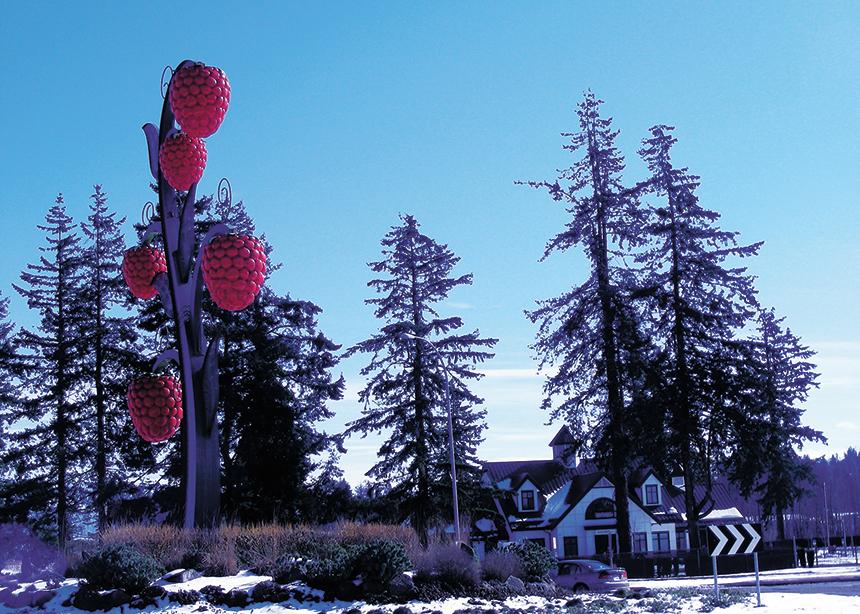 The roundabout on South Clearbrook Road in Abbotsford, B.C., features a giant raspberry sculpture, symbolic of the agricultural heritage of the area. In the background is the Mennonite Heritage Museum. (Photo by Amy Dueckman)

The raspberry capital of Canada, the most charitable city in Canada, the Bible Belt of Canada. These terms have all been used to describe Abbotsford, the site of Mennonite Church Canada’s Gathering 2019, to be held from June 28 to July 1. Nestled in the scenic Fraser Valley just over the border from Washington state, Abbotsford is a growing community known as the “city in the country.”

It is also diverse. After Toronto and Vancouver’s metropolitan areas, Abbotsford, with an estimated population of 147,000, has the highest number of visible minorities in Canada. It is also the largest city by area in British Columbia.

Unlike in Ontario, where Mennonites settled beginning in 1786, or in the Prairies, where Mennonites came in the 1870s, the Mennonite presence is relatively recent on Canada’s West Coast. Some Mennonites had arrived in B.C. by the early 1900s, settling in the Castlegar, Prince George and Vanderhoof areas. But being few and far apart, they had little sense of cohesiveness.

More Mennonites began moving to the Lower Mainland of B.C. beginning in the 1930s because of an ambitious lake-draining project. Sumas Lake between Chilliwack and Abbotsford would overflow in spring and often flood the village of Yarrow. The government began a project to drain the lake in 1922. Through a system of dams, dykes, canals and pumps, the project was completed by 1925 and 13,500 hectares of fertile farmland were reclaimed at a cost of $3.7 million.

The reclaimed land was put up for sale, and one of the purchasers was Chauncy Eckert of Yarrow. Hoping to attract farmers, Eckert put an ad in the Winnipeg Free Press Prairie Farmer. Beset by economic depression and dry farming conditions, Mennonites from the Prairie provinces answered the call, eager to start over in an area of cheap land, a milder climate and adequate rainfall. They also hoped to establish a community modelled after their Russian villages. The community of Yarrow welcomed 12 Mennonite families in 1928.

More Mennonites from across the country began coming to B.C. and settled in Yarrow, Abbotsford and other communities. The first Mennonites arrived in the Clearbrook area (Matsqui Municipality, later amalgamated with Abbotsford) in 1931. Many farmers found raspberries to be a profitable cash crop.

Christian education was a priority for the Mennonites from the beginning of their time in B.C. A Bible school was first established in Coghlan (Aldergrove) in 1941 and was later moved to Abbotsford, where it became Bethel Bible School. In 1970, Bethel Bible Institute merged with the Mennonite Brethren (MB) Bible Institute to become Columbia Bible Institute, the first inter-Mennonite Bible institute in North America, and now Columbia Bible College. In 2015, it became the permanent site of the Metzger Collection, a museum-quality compilation of historical art and artifact replicas.

Mennonite Educational Institute (MEI), was founded in 1944 as a private high school in Abbotsford, with 14 churches as founding members. In 1993, the school expanded to the elementary level with the addition of Kindergarten and Grade 1, adding a grade every year until it offered all 12 grades. The elementary and middle schools were opened in 1997. While the student body at its founding was 100 percent Mennonite, current students represent many denominations and other ethnic and religious backgrounds.

On the other end of life’s spectrum, concern for care of the elderly motivated the formation of the Mennonite Benevolent Society in 1953. From its beginnings when Menno Home opened to 26 residents, today the Menno Place complex in Abbotsford houses more than 700 residents in different levels of care on a 4.5-hectare campus.

The Mennonite presence in B.C. is strong, with MBs far outnumbering MC Mennonites. In Abbotsford today there are three MC congregations but more than twice that many MB congregations. The two denominations cooperate not only on the elementary, secondary and post-secondary level, but on efforts such as Mennonite Disaster Service and Mennonite Central Committee (MCC). The Mennonite Historical Society of B.C., organized in 1972, also encompasses both MC and MB stories.

For years, many Mennonites in B.C. had been hoping for a place to tell the Mennonite story, specifically the story of how Mennonites came to B.C. The dream was realized when the Mennonite Heritage Museum was opened in Abbotsford in 2016. A permanent exhibit inside the museum tells the Anabaptist and Mennonite story over the past 500 years through display panels, audiovisuals and interactive digital media. Temporary seasonal displays are also featured.

Sharing the building is the Mennonite Historical Society of B.C., which collects and preserves stories and archival records relating to Mennonite history in the province, and maintains a library and databases for historical and genealogical research. Computer stations are available for anyone interested in researching family histories.

A B.C. women’s ministry group formed in 1939 and existed in some form until 2007. Although there is no longer a formal structure for Mennonite women in MC B.C., a fall retreat and a spring event remain.

MC B.C.’s Camp Squeah, located in the mountains near Hope, an hour’s drive east of Abbotsford, hosts summer camps and church retreats, and serves as a year-round retreat centre for school and community groups. The word “Squeah” means “place of refuge” in the local Salish dialect.

At a May 27, 2007, celebratory worship service, 30 of MC B.C.’s 34 congregations signed a renewal covenant addressing the mutual relationships in, and commitment to, MC B.C. Two congregations later eventually signed and two more chose to leave the regional church later that year.

Mennonites have continued to move to B.C. throughout the years, not only from other parts of Canada but from Europe following the Second World War and later from Latin America and Asia. Today, MC B.C. has more than 3,000 members in 29 congregations that worship in 11 different languages: Cantonese, English, German, Hmong, Japanese, Karen, Korean, Lao, Mandarin, Spanish and Vietnamese.

In 2012, MC B.C. sponsored the Pilgrimage Project, a series of short online videos featuring interviews with leaders in MC B.C. and discussing the work and ministry of the regional church.

An ongoing involvement in MC B.C. is relating to Indigenous neighbours. Before Sumas Lake was drained in the 1920s, the lake and surrounding land had been most important to the Stó:lō people for fishing and other aspects of their culture. While the farmers who gained valuable agricultural land were the winners, Indigenous people lost a valuable resource.

There is no longer an MC B.C. Indigenous relations coordinator, but an Indigenous Relations Group continues to look after the work, such as redemptive listening, learning and advocacy, in order to preserve Indigenous dignity, cultural and spiritual experience. Some of this participation includes the Langley Walk for Reconciliation and continuing education of churches on the findings and recommendations of the Truth and Reconciliation Commission. This committee is also encouraging MC B.C. congregations to consider adopting a statement “acknowledging with gratitude our existence on what in most of our constituency is unceded Indigenous territory.”

Due to last year’s regional church restructuring, the new position of church engagement minister was created. Kevin Barkowsky concentrates his efforts on engaging MC B.C. congregations in fulfilling God’s mission locally and around the world.

MC B.C. encompasses a wide range of viewpoints, from liberal to conservative. Most divisive in recent years has been the Being a Faithful Church (BFC) process and the adoption of BFC7 that addresses marriage and sexuality issues. Some congregations have chosen to leave, and some are re-evaluating their commitment to the MC B.C. family.

Nonetheless, MC B.C. continues on a “journey of reimagining who we are,” says Garry Janzen, executive minister, as he cites three key themes: to define and engage Anabaptist identity; to be a missional community; and to build connections and trust between and within congregations.

“This ministry is work that we can only do together.”

For places to visit while attending the gathering in Abbotsford, see Amy Dueckman's Travel Guide.

1. What are your experiences with the lower mainland of British Columbia? If you have travelled there, whom did you meet and what did you learn about the people? How is the history of the Mennonite community in B.C. different from other Mennonite communities in Canada?

2. Abbotsford has a great deal of ethnic diversity. What strengths and challenges come from having a population that is diverse? How does this ethnic diversity affect the church?

3. Amy Dueckman writes that the early Mennonites in B.C. “hoped to establish a community modelled after the Russian villages.” What was so attractive about the Mennonite village system in Ukraine that they wanted to replicate it? Why was this not an achievable goal?

4. Dueckman writes that seven Mennonite congregations in B.C. formed a conference in the late 1930s. What are the advantages of having congregations work together? If you were in that situation with a young congregation today, would you organize a regional group? Why or why not?

5. In this From Our Leaders column, Garry Janzen welcomes the nationwide Mennonite church to Abbotsford for Gathering 2019. What creative ideas about being church might you have to share? What new ideas about church ignite your imagination?

Further reading about Gathering 2019:
Welcome to Gathering 2019
Prepare for something new and yet familiar
Come and let your imagination be ignited 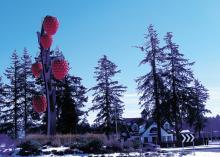 The roundabout on South Clearbrook Road in Abbotsford, B.C., features a giant raspberry sculpture, symbolic of the agricultural heritage of the area. In the background is the Mennonite Heritage Museum. (Photo by Amy Dueckman) 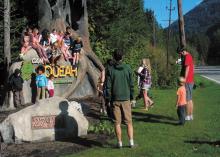 Camp Squeah, MC B.C.’s church camp near Hope, is a place of refuge for children and families. (Photo by Amy Dueckman) 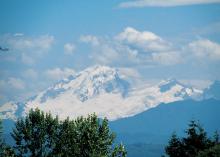 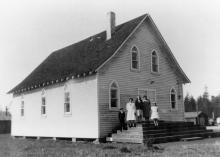