Raising reconciliation from the dead 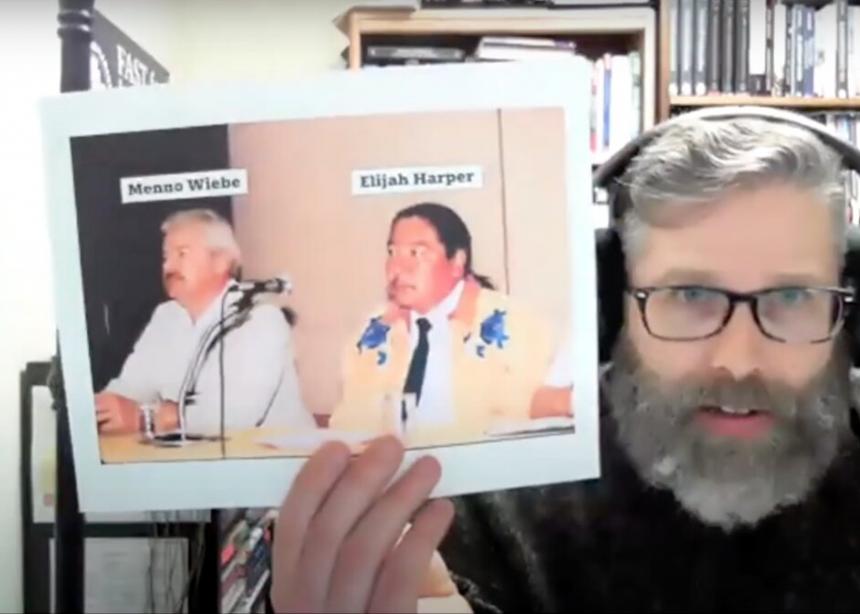 I saw that stark message on a sign at the Landback Camp in Victoria Park in Kitchener, Ont., in June 2020. Local Indigenous people established the camp as part of a larger effort to assert their presence and reclaim their space on the Haldimand Tract in Ontario. As chair of the Truth and Reconciliation Working Group of Mennonite Church Eastern Canada, the sign’s startling message evoked many emotions and questions for me.

After speaking with people at the camp, I understand the sign’s message more deeply. “Reconciliation” conjures a warm, comfortable process, like sitting on a cozy couch for friendly conversation. The reality is more uncomfortable. Too often, when Indigenous people express anger, they are dismissed for “holding on to the past.” This dismissal covers up ignorance of colonial oppression and violence that persists today. The arrest and harassment of land defenders at another site of Indigenous resistance (1492 Landback Lane) near Caledonia, Ont., is an unsettling, current example. When police opened fire on them last summer, the meaning of the Victoria Park sign became chillingly clear.

As settlers, if we hope to see reconciliation raised from the dead, we must face the truth of ongoing colonial violence, speak out and act against it. Our working group collaborates with a grassroots ecumenical coalition to seek ways to stand in solidarity with the 1492 land defenders. We also host a virtual, yearlong speaker series called “Treaties as sacred covenants” at mcec.ca/programs/truth-and-reconciliation, where Indigenous and settler leaders explore the historical contexts and present implications of treaties made, broken and renewed.

Over the past year, I have learned that Indigenous-Settler reconciliation is more like reconciling a bank statement than having a cozy conversation. One compares the balance in the account book to the most recent bank statement; differences between the two must be examined and rectified. If historical Indigenous-Settler treaties are recorded in a “cosmic account book,” there are many differences—injustices—to be examined and rectified. Settlers like me should feel uncomfortable when we engage sincerely in reconciliation. There is no cozy couch; settlers are collectively perched on the proverbial hot seat, whether we acknowledge it or not.

Perched on that seat, I am grateful, and relieved, to find that reconciliation is more than a relentlessly uncomfortable reckoning. I have had wonderful, warm conversations with Indigenous leaders in my work with the working group. Last fall, I spoke with Mary Anne Caibaiosai, an Anishnabe woman who invites settlers to join her annual “Water walk for the Grand River,” walking behind her, listening and learning.

Now is the time for settlers to walk behind and alongside Indigenous people. There is much listening and learning to do. I invite you to join that learning, to speak against colonial violence and to build living reconciliation through relationships.

Scott Morton Ninomiya lives on the Haldimand Tract with his family. He is a PhD student in global governance at the University of Waterloo, Ont., focusing on decarbonizing and decolonizing local energy systems.

Read more From Our Leaders columns:
Transition in leadership
The crowd
Refined, pared back, purified
Church needs to be like a choir
Growing with our global faith family