‘Queer and quirky and profoundly worthy of wonder’ 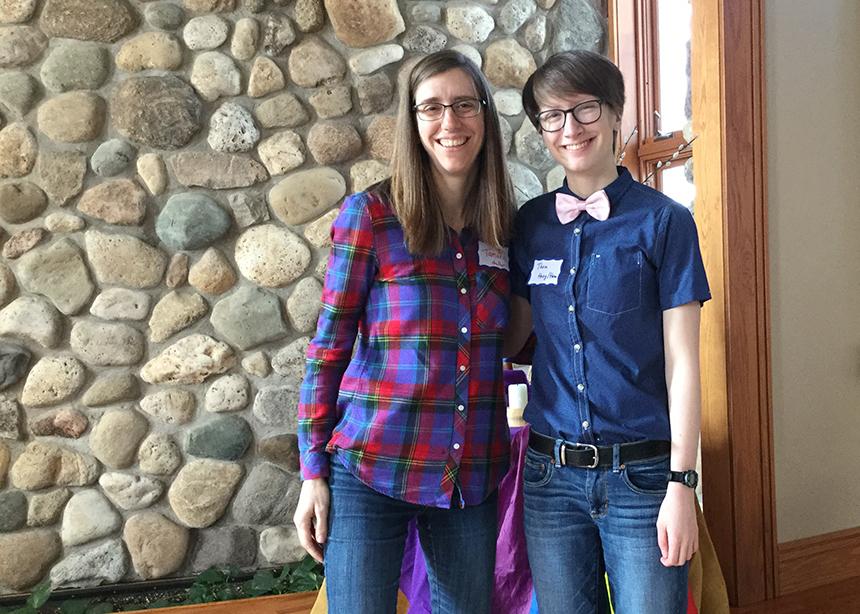 The vision for this event came from 17-year-old Thea Andres, who identified the treatment of queer people—a term being reclaimed by many in the LGBTQ+ community to describe themselves—as a problem. Andres partnered with Tamara Shantz of Pastors in Exile (PiE) to shape and lead “Beyond binaries” as a way to address it.

After worship, Andres presented “LGBTQ+ 101”—an opportunity to learn terminology and clear up misunderstandings. Andres described four major aspects of an individual’s identity:

Andres emphasized that, for some people, biological sex and gender identity don’t match, and sometimes they don’t fit into the binary categories of male and female. This can be difficult because these categories are loaded with cultural expectations.

Andres and Shantz, along with Peter Haresnape and Grace Gibney, formed a panel to share, with vulnerability and honesty, their stories of welcome and affirmation, their challenges and barriers, and what they want their straight allies to understand.

Haresnape described how, after his marriage at city hall to his husband, it was “immensely meaningful” to have members of his church help to create a service of celebration, “blessing us and praying for us and coming around us” in a powerful experience of welcome.

Panellists noted how important it was to have safe spaces like Generous Space Ministries and PiE’s Queerly Christian “to embrace that part of myself.” They also addressed Mennonite Church Canada’s decision, in the Being a Faithful Church (BFC) process, to leave space for congregations to make different decisions about LGBTQ+ inclusion.

Andres said, “Taking a neutral stance is actually an oppressive stance,” because it leaves room for people to say hurtful and harmful things.

Shantz described being part of the BFC conversation as an incredibly “hard process,” because “your community is still deciding whether it’s okay if you are there or not, and you are already there . . . so it’s creating an ‘us’ and ‘them.’ ” She noted how heartened she was when someone in her church spoke up and asked, “Isn’t it ‘we’? Aren’t ‘we’ a community of diverse orientations?”

All of the panellists emphasized that it isn’t enough for a church to create an affirming statement of LGBTQ+ inclusion. More needs to be done to embody what that means.

Gibney challenged people to examine their own privilege, and to educate themselves. She said it is exhausting for people in the marginalized community to take all the responsibility to be the educators.

Shantz described such learning as an “intercultural conversation.” People who are formed in “heteronormative patterns” need to take on a posture of learning about queer culture just like they would seek to learn about a new immigrant community.

Workshops in the afternoon featured more powerful storytelling and ideas about how to dismantle barriers so that all can fully participate in churches. Suggestions included:

- Singing hymns that reflect and celebrate a diversity of genders.
- Varying language and descriptions of God.
- Interpreting Scripture and doing theology from a queer perspective.
- Displaying rainbow signs, flags and colours.
- Printing and verbalizing welcoming statements regularly.
- Wearing name tags that include a rainbow symbol and preferred pronouns.
- Making it clear on a church website if the congregation is welcoming or not.
- Noting events in the queer community in church announcements.
- Blessing and celebrating marriages of all genders.

To end the day, participants were asked to post lessons learned, perspective shifts and next steps on charts on the wall. Another action taken was to connect people interested in discussing how affirming churches could offer each other and the LGBTQ+ community more resources and support.

Further reading:
Creating space to work towards inclusion
Searching for a 'generous space' 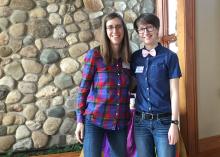 The suggestion that “Interpreting Scripture and doing theology from a queer perspective” as a viable option within the church is disturbing! Is there a shepherd who loves this group and cares enough for them that he will teach them theology and interpretation of Scripture from God’s perspective? Anything less than that will only them keep them away from God’s truth and result in deadly error.

Paul's words to the early church apply to our churches of today:

"For I have not shunned to declare to you the whole counsel of God. Therefore take heed to yourselves and to all the flock, among which the Holy Spirit has made you overseers, to shepherd the church of God which He purchased with His own blood. For I know this, that after my departure savage wolves will come in among you, not sparing the flock." (Acts 20:27-29)

This comment is sadly typical of the harmful ways we've talked about sexuality in church. Someone who didn't attend the event, apparently isn't aware of the existence of queer theology, and can't be bothered to actually go do some reading before responding to queer theology still feels entitled to judge and criticize. This isn't helpful, and this isn't what being church together looks like.

If anyone's looking for why so many young people are frustrated with the church and don't feel like they belong, take a look here. I know I don't want to be publicly associated with this, and I don't want people to assume that judging others from a place of ignorance is what I've committed myself to when I tell them that I'm Christian.

What a joy to attend the "Beyond Binaries" event on April 6th. God's loving presence was so evident throughout the day: in the joyful and inclusive welcome, the prayerful worship, the thoughtful and Biblical theological reflection, the helpful workshops and the respectfully curious questions. Christ's radical kindness and God's call to love and justice were the foundation for the conference, and underscored every moment. LGBTQ+ Christians, and we allies, were encouraged and equipped to continue God's good work in the world. Your article summarized very well God's loving inclusion of all: "people of all genders are created in the image of God, are beloved of God and are essential parts of the body of Christ".

People are absolutely correct that God has created each and every person in His image and that He loves each and every person extravagantly! Amen to that! Part of loving us is giving us healthy boundaries much like a parent does to their own child- we know better than our child what is beneficial and safe for them and what is not. God alone knows the purpose He created each of us for and the very best life He has designed us to live. When we step out of His best life for us, he calls for correction.
Unfortunately, in the church of today we are no longer able to discuss correction and sin and we enjoy diverting the blame to others. EVERYONE should be welcome in EVERY church- if you are feeling attacked, uncomfortable and unwelcome, maybe that is conviction from God in your soul, and you are misguiding anger towards others who do not support your lifestyle. It is a difficult thing to understand but a person can love someone, like them, accept them and befriend and support them but disagree with their lifestyle. Forcing them to wave a flag and celebrate something they do not agree with is not very loving in return. Just think about that seriously- try and put yourself in their shoes for once instead of forcing your agenda down their throat. Your life is not about you, IT'S ABOUT GOD and when you start living that way you won't need to justify yourself to others or care what they think.
God is the Ultimate Authority- Let Him decide what is right and wrong and take Him at His word. Who am I to question the laws of God? His ways are far higher than my ways, and his thoughts far higher than my thoughts. What is disappointing to see is that church has taken the focus off of our Almighty Lord and Saviour and has become focused on individuals rights and freedoms. We are ALL sinners; thus the need for a saviour to cover over our ongoing sin problem. When we gather as congregations, our focus is to be on worshipping God; not our own agendas. Anything other than that does not honour or please God.
I hope my comment will be published in full and not edited or not included at all. Thank you.