Searching for a 'generous space' 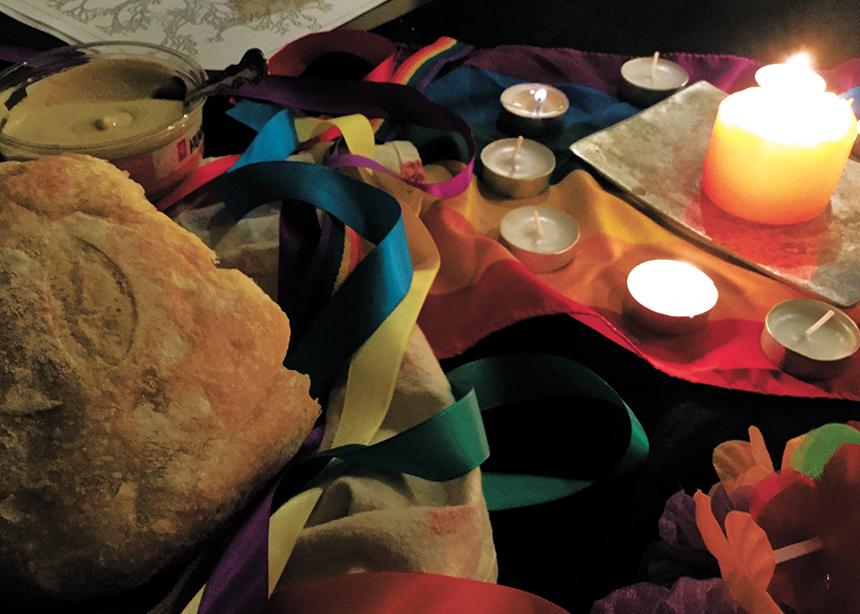 The participants identify under the LGBTQ+* umbrella and take the time to sing queer hymns, pray, take communion, reflect on Scripture and take part in a community meal. They gather twice a month to worship together outside of, or instead of, at their church.

According to Sylvia Hook, who is a founder and one of the leaders of the group as well as a board member of Canadian Mennonite Publishing Service, it’s a time for people to come as they are and find spiritual nourishment with others who are like-minded and like-experienced.

The 28-year-old attends Erb Street Mennonite Church in Waterloo, Ont., which is an affirming congregation, but says Queerly Christian is a special place where they can just be. “Worshipping in a queer-normative, a queer-majority environment is a very different experience than worshipping in an affirming space,” Hook says.

Queerly Christian is an initiative of Pastors in Exile (PiE), an Anabaptist-rooted movement that is passionate about connecting young people in Waterloo Region with vibrant faith experiences outside and inside of church walls.

According to its website, Queerly Christian is meant to provide a safe space for LGBTQ+ Christians to explore the intersections of faith and sexuality or gender identity in a welcoming community.

“One of the main needs it’s filling is community,” Hook says. “For some of the members of the group, it’s the first time they’ve met other queer Christians. For some people, it’s a place to go when the faith of their childhood failed them. Their church may have rejected them, or the theology of their church didn’t make room for them.”

But the group isn’t just about queerness and Christianity. It’s also a place for participants to check in on each other’s mental and physical health.

“The smaller group like this also makes it easier to bring your whole self,” Hook says. “It’s much easier to say, ‘I’m having a really hard time right now,’ to 10 people rather than 150. This is sadly not that common and something we don’t feel in church, even if it is affirming.”

For other LGBTQ+ Mennonites, queer Christian spaces don’t need to be worship- or Bible study-oriented to meet needs that other Christian and social groups aren’t.

Ben Borne, 29, attends Wildwood Mennonite Church in Saskatoon, which is an inclusive church. He takes part in a monthly group for LGBTQ+ Christians through an organization called Generous Space.

Generous Space, which has small groups all over Canada, is motivated to disciple “Christ-followers to work together to eliminate fear, division and hostility at the intersection of faith, gender and sexuality.”

The group, like others in the Generous Space community, meets monthly for food and fellowship, and to share about their lives. Sometimes participants talk about their faith, but in general they just socialize.

“Attending an affirming church is great, but being part of a group of like-minded and like-experienced people is helpful in terms of providing a space to articulate my experience of faith that perhaps isn’t the same as others,” he says “Plus, it also provides an opportunity to pass on wisdom and experience to others who are on their way.”

Clare Schellenberg helped start a small group for the LGBTQ+ members of Hope Mennonite Church in Winnipeg when she worked as an associate pastor there in 2017. “The hope for this group was that it would be a safe and confidential place for those who identified, or were questioning, their place in the LGBTQ+ community, to connect and be with one another,” she explains.

Much like the Generous Space group Borne attends, Schellenberg’s group spends the majority of its time sharing food, talking, supporting one another and connecting with other LGBTQ+-identifying Christians.

Although small groups provide unique experiences for these LGBTQ+ Mennonites, they all agree that affirming churches and church-borne LGBTQ+ groups are important.

Schellenberg says that queer church groups are important for all Mennonite Church Canada congregations, whether they’re affirming churches or not.

“These groups remind our congregations that we exist, that we care about our faith and that we have a place within the body of Christ,” she says. “While welcoming statements are a huge step in a congregation’s journey of affirmation, having an LGBTQ+ group is putting action into those statements and providing a sense of healing.”

Borne believes that safety for people on the LGBTQ+ spectrum is paramount in a church setting. “I believe that the first imperative for the church is to create safe spaces for queer people to simply be. Whether it’s an intentionally queer Bible study, or an all-inclusive Bible study, it doesn’t matter to me. As long as people feel safe,” he says.

Hook says that having a safe space is energizing: “It makes it easier for me to go out and do advocacy in the wider church. It gives me more energy and helps me remember why I do it.”

* LGBTQ+ stands for lesbian, gay, bisexual, transgender, queer/questioning, plus all of the other sexualities, sexes and genders that aren’t included in these few letters. 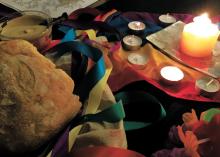 There is something intriguing about this article. It speaks about something 'more than' they are receiving in their church circles, which in this article are seemingly affirming congregations. The benefit of the generous space is nicely pointed out in this article. While I can appreciate the need for like-minded persons to be among like-minded, I hope this is not a critique of the churches which they are a part of. Churches are churches because of Jesus (1 Cor 3:11) and Jesus is probably the ultimate welcomer. Some of these welcoming churches also face changing neighbourhoods, especially as refugees, Muslims, Indigenous, and many cultures also seek a welcome in our midst. I hope LGBTQ+ persons appreciate and identify with and participate fully in their churches' mission to invite in all who would come. All who claim Jesus become a part of the church's welcome mat.

Matthew 7:13 succinctly speaks of a very generous space—“...for wide is the gate and broad is the way that leads to destruction, and there are many who go in by it." But the good news for everyone (no matter who we are), is that Jesus Christ provides forgiveness to all who repent and believe in Him for their salvation. Living a life of repentance and faith in Jesus Christ puts us onto the narrow road that leads to life. Only a few will find the small gate to the narrow road. (Matt 7:14) Let’s each of us make sure that we are on the narrow road.