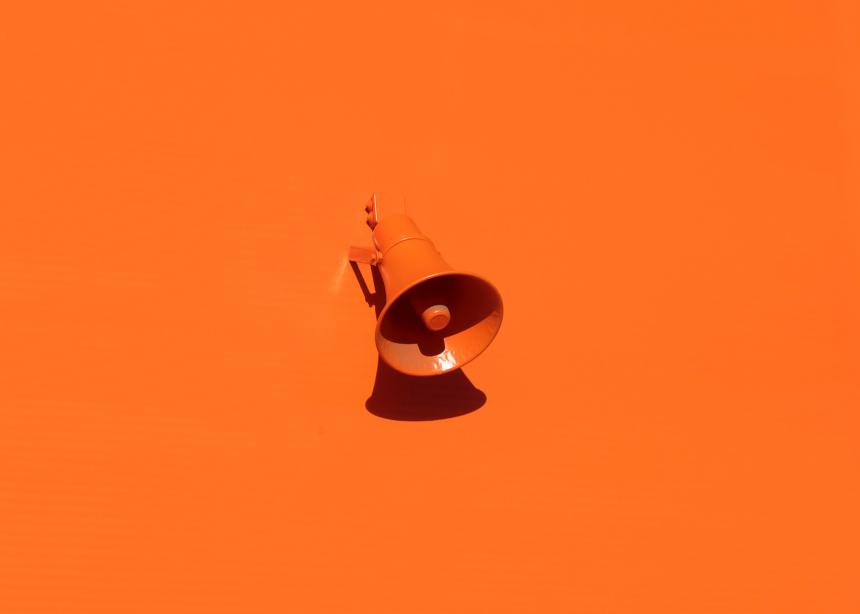 The unmarked graves of several hundred Indigenous children. A deliberate act of violence against a Muslim family out for a stroll. In recent weeks, new reports have again shown how entire groups of people suffered because of their ethnicity or beliefs. (Sadly, by the time you read this, there may have been more.) In response, people across the country have reacted in shock, grief and anger at a society that allows this violence to happen—again and again.

“We believe that God has created human beings in the divine image,” asserts the Confession of Faith in a Mennonite Perspective. “God formed them from the dust of the earth and gave them a special dignity among all the works of creation. Human beings have been made for relationship with God, to live in peace with each other, and to take care of the rest of creation” (Article 6).

Humans are imbued with a God-given dignity, each one valued as a precious child of God, and deserving of respect, safety and love. This belief undergirds the gospel of peace we Anabaptists claim to follow.

Yet, ignorance and hatred surround us, leading to these indignities against God’s children. Historical wrongs were committed against human beings who were lovingly created as a reflection of the Divine. Present-day violence cuts previous lives short and unleashes fear in entire communities.

No one can restore the lives that were cut short by racist systems and hateful actions. Seeking and telling the truth is important. Apologies and financial compensation may help ease some difficulties for survivors. But these acknowledgments will never equal the precious lives lost.

One characteristic of violence in all its forms is that it dismisses the value of people who were created by God. The challenge—for people of faith and goodwill—is to re-affirm that lost dignity and to strive diligently against the harmful attitudes that continue to fester.

In response to the discoveries in Kamloops and the attack in London, Ont., many have engaged in symbolic actions, through virtual and physical demonstrations of support. We have witnessed flags at half mast, orange t-shirts, and impassioned social media posts. There have been tears and prayers of lament. Flowers, teddy bears and children’s shoes symbolized the caring of our communities.

But these are only first steps. What can we do, beyond symbolic acts, to honour and protect the dignity of each child of God? We are called to stand up against fear and hatred in more concrete ways.

As individuals, we must remember that each of us is prone to the same attitudes that we despise in others. We need to examine, honestly and carefully, our own tendencies to devalue people who are different from us. We can resolve to listen deeply to the experiences of those who have been targeted. We can learn how to push back, with wisdom and determination, against acts of hatred.

We pray for those caught up in violence. Most certainly we pray for the victims. But the Bible instructs us to pray also for the “enemies,” specifically the people who have caused the pain, and the ones tempted to cause pain through words and deeds.

It is time for our churches and institutions to move beyond the words of land acknowledgements. How are we teaching anti-racism to people of all ages? Are we connecting with other people of faith to work on behalf of marginalized people in our communities? Maybe it is time to revisit the Truth and Reconciliation Commission Calls to Action and to study the ones addressed to churches and faith groups. Do our policies, programs, and practices value and promote the rights of all people? If not, what needs to change?

Together, let’s consider how we will respond to acts of hatred against God’s beloved children. May the Almighty give us courage.

Starting with the next issue, Canadian Mennonite will begin the summer practice of offering three online-only issues. The July 5, August 2 and August 30 issues will not appear in print but will be available through email to all digital subscribers. If you already receive a digital version of the magazine, these will automatically come to you. If you receive only the print issue but are interested in seeing the digital issues as well, through the summer and beyond, you can add that option at canadianmennonite.org/subscribe/manage or email office@canadianmennonite.org. There is no extra cost to current subscribers.

Read more editorials:
Growers and eaters
Hellos and goodbyes
Words and community
What happens when we read together?
Greening the church

Christianity and Othering: The guise in the mirror

Our societal mirror of hatred reflects a strong Christian bias. Until Christianity is willing to recognize and accept other people with their other Gods, we will have hatred. To quote cartoonist Walt Kelly in Pogo, “we have met the enemy and he is us” (Earth Day 1971). Until we are willing to change Christianity, Christians will remain the same.

Many of us have received a steady diet of indoctrination of Christianity since our formative years. The exclusionary aspects of Christianity, the us and them, believers and non-believers, superior/inferior, the promise of heaven, the horrors of hell, the “we are God’s chosen/children/people,” are all powerful tropes instilled in the Sunday School minds of little Christian children. These little Christian children grow up to amplify these bromides, these nuggets of “othering,” through powerful organizations called churches, which assert an “unless you’re in, you’re out” theology through missions, conversions, and promises of the good life now and hereafter.

An “othering” hatred for and genocide of Indigenous peoples by European Christianity evidenced by the church-run Indigenous residential school system in Canada has been well-documented over time (Canada’s Truth and Reconciliation Commission 2015). Recently, the bodies of 215 children were found interred on the grounds of a Catholic run residential school in Kamloops, British Columbia. How many more bodies of Indigenous children yet to be exhumed on the grounds of Canadian residential schools remains to be seen. Euro-Christianity, including Anabaptist Mennonite Christianity, has consistently, past and present, identified non-Christian believers as “other,” and has not acknowledged them as the “precious children of God,” which Virginia Hostetler wishes were the case. Rather these “precious children of God” only become so if and when they become “Christian,” and cease to be other.

The “othering” of racial discrimination of African Americans by Euro-Christianity through slavery and denial of civil rights over the previous 400 years (on-going) in the United States of America is also well-documented.

Since September 11, 2001 (9/11), the United States and Canada have seen a spate of Islamophobia motivated shootings and killings of Muslims, however the enmity between Christianity and Islam is longstanding, going back to the 7th century origins of Islam and exacerbated by the Crusades of the 11th, 12th, and 13th centuries.

Of all the religious groups experiencing hate crimes in North America, Jews experience hate crimes at double the rate of all the rest of the groups combined (Statista 2019). Although anti-Semitism reached extremes during the Nazi regime of WWII and is rampantly prevalent in the 21’st century, anti-Semitism has deep roots in the parting of ways of Judaism and Christianity after the Romans crushed the first Jewish rebellion, (66-70 CE) and radical followers of Jesus left for Syria, cutting ties with the mainstream pharisaical Jewish establishment.

Izak Spangenberg (Univ. of Pretoria, S.A.) notes that the post-Jesus split of Christianity from Judaism is at the root of modern-day racism in the Western world. In his article “The Religious Roots of Racism in the Western World” A brief historical overview” (2019), Spangenberg posits that supersessionism/replacement theology (New Covenant replaces the Old Covenant), was/is at the root of the schism between Judaism and Christianity, resulting in not only a hierarchy of religions, but a hierarchy of race as well.

Just in case modern day Anabaptist/Mennonites are feeling left out of the othering/racist rat-race, we can reflect on our own continued actions of possession of Indigenous lands, and the continued participation of “taking the Indian out of the child” by provincial child welfare authorities through foster care programs placing Indigenous children in non-Indigenous homes (Mennonite homes included). The January 01, 2021, Federal gov’t “Act respecting First Nations, Inuit and Metis Children and Youth” in care, seeks to address the continued genocidal policies of Canada’s child welfare programs.

Christianity has a long and sordid history of identifying the "other." If we want, as Virginia Hostetler suggests, to “examine, honestly and carefully, our own tendencies to devalue people who are different from us,” then we will need to be willing to examine the beliefs and biases of Christianity. We will need to question whether our God Yahweh, will tolerate the existence of other Gods. If so, we will need to question our own intolerance of the “other,” and why so much of our Christianity is focused on denying other people their right to believe in other Gods.

Christianity and Christians will need to change in order for much of the hatred in our society to abate.

Chief Bobby Cameron of the Federation of Sovereign Indigenous Nations calls the residential school deaths, a "crime against humanity and genocide."

Elder Florence Sparvier of Cowessess First Nation and survivor of the Marieval Residential school says, paraphrase "they called us heathen and said our (Indigenous) spirituality was not a spirituality." "They took what/who we were and gave us this other thing (Christianity)."

Christianity is on trial, all of Canadian Christianity. Mennonite Church Canada needs to drop every program it is engaged in at this time, and address the depth to which MC Canada and its constituents engaged in, were complicit in, and continue to be complicit in the genocide and crimes against Indigenous peoples in Canada.

We need to be re-informed of the implications of Mennonite settler colonial land appropriations and the devastating genocidal impact on Indigenous peoples and held to account for these continued actions.

Rick Cober Baumann of Mennonite Central Committee needs to immediately reinstate the funds MCC Canada cut from its budget allocated for Indigenous programs in Canada. All new funding needs to be redirected to investigating and educating Canadian Mennonite (mostly white) congregations as to our complicity in a genocidal attitude and response to Indigenous peoples.

Mennonite Church Canada must redirect its focus from imploring the Government of Canada to support legislation for UNDRIP, and focus its energies on the depth of complicity of its congregants on the genocide and crimes against humanity in its historic and on-going relationship with Indigenous peoples in Canada.

Mennonite Church Canada must denounce the "spiritual hierarchy" of a supposed "superior Christianity" and publicly recognize and acknowledge the integrity of all religions, including Indigenous spirituality.

This is a "five-alarm" fire for Christianity. If we (Mennonite Church Canada) maintain the status quo and continue to only provide lip-service (prayers) to this dilemma, a Christianity based on love and justice loses all of its integrity.