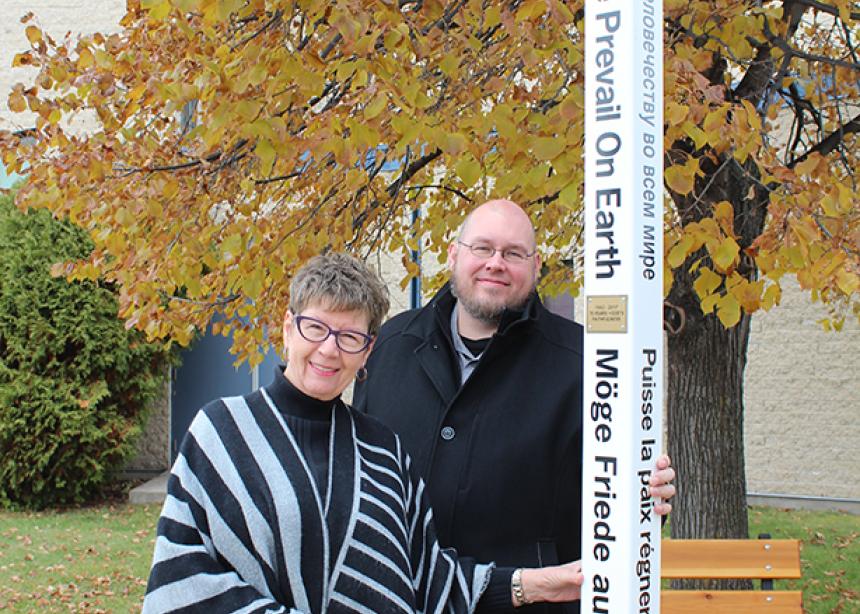 Karen Peters and Pastor Lee Hiebert stand by the peace pole that displays the prayer, ‘May peace prevail on Earth’ in eight languages. (Photo by Gladys Terichow)

The peace pole and peace garden in front of Steinbach Mennonite Church connect the congregation with more than 200,000 groups and churches worldwide that desire a world at peace.

The pole displays the prayer, “May peace prevail on Earth,” in eight languages. Surrounding the pole is a newly planted peace garden with an inviting path and benches.

“We hope that people will take time to sit on these benches under the trees and reflect on the meaning of peace,” says Karen Peters, chair of the church’s 75th-anniversary celebration committee.

For Peters and many others in the congregation, the peace pole project also reflects God’s desire for peace and reconciliation among all people who have been wounded by disunity and divisions in the church community. “It is a silent but visible reminder to reconcile what needs to be put right and to move on in a spirit of harmony,” she says.

Following the cessation of the German service in early 2017, about two-thirds of the congregation had walked away from Steinbach Mennonite. Those who left did not start another church but scattered in many directions.

A congregation of about 120 remained in a building that has an 800-seat sanctuary, a large foyer, a combined gym and banquet hall for 500 and a large second-floor education wing.

“Suddenly everything changed,” Peters says. “We were crying out to God to help us. What do you want us to do?”

One of the many painful aspects of so many people leaving was the absence of children and youth. The second-floor education wing was now empty.

“The group that remained had difficult decisions to make,” says Peters, who served as the congregation’s chair throughout this difficult period. “Will we remain a congregation? Can we afford to stay in the building? Should we consider amalgamating with another congregation? One of the amazing things is that the church board remained intact and unified in purpose.”

Peters was part of a six-member task force that explored these questions. “Every time we figured something out, we had more questions,” she recalls. “We are deeply grateful for the counsel and support of Mennonite Church Manitoba.”

When the task force’s findings were presented to the membership, a decision was made to remain as a congregation, stay in the building and hire Victor Kliewer as an interim lead pastor.

Steinbach Community Outreach, a church-supported ministry begun in 2008, was using a large room in the church for distribution of food and clothing to people experiencing homelessness or poverty. This ministry had grown to become a charitable organization with its own board and had plans for expanding services. A decision was made to offer the majority of the upper level to Steinbach Community Outreach.

The second floor of the church is now an inviting drop-in centre complete with a kitchen area for cooking and nutritional programs. Former Sunday school classrooms are filled with donations of clothes, shoes and toiletries for distribution.

These answers to prayers gave the congregation confidence that they would find a pastor willing to lead it. During the spring of 2017, God answered those prayers when Lee Hiebert responded to God’s call to serve the congregation as lead pastor. (Read more about Lee’s story at “Prodigal pastor.”)

A year later, amidst restructuring efforts, Peters says the congregation is enjoying an increase in the number of children attending and the return of a vibrant spirit within the congregation.

In her reflections at the Thanksgiving blessing ceremony for the peace garden, Peters spoke of how the plants in the garden celebrate the church’s heritage and God’s faithfulness.

“The globe cedars were chosen for their ‘evergreen’ aspect—like faith . . . always living and growing,” says Peters. “Karl Foerster grasses represent our prairie heritage and acknowledge the immigrants who started this church in 1942. The little quickfire hydrangeas surrounding the pole will show us that growth and beauty come after dormancy—even after periods of struggle and deep pain.”

She concluded her remarks by saying: “May this peace garden serve as a silent visual of a common wish—a permanent reminder to think, speak and act in a spirit of harmony. It is our prayer that all who pass or visit this site be encouraged to promote peace beginning with themselves and their family.

“May those circles widen to include this community, our province and the world. . . May peace prevail on Earth. Shalom.” 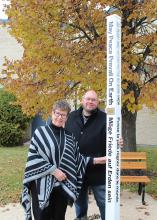 Karen Peters and Pastor Lee Hiebert stand by the peace pole that displays the prayer, ‘May peace prevail on Earth’ in eight languages. (Photo by Gladys Terichow)