How an elderly B.C. congregation brought Lee Hiebert back into the fold and set him on his way to ‘a joyful adventure’ 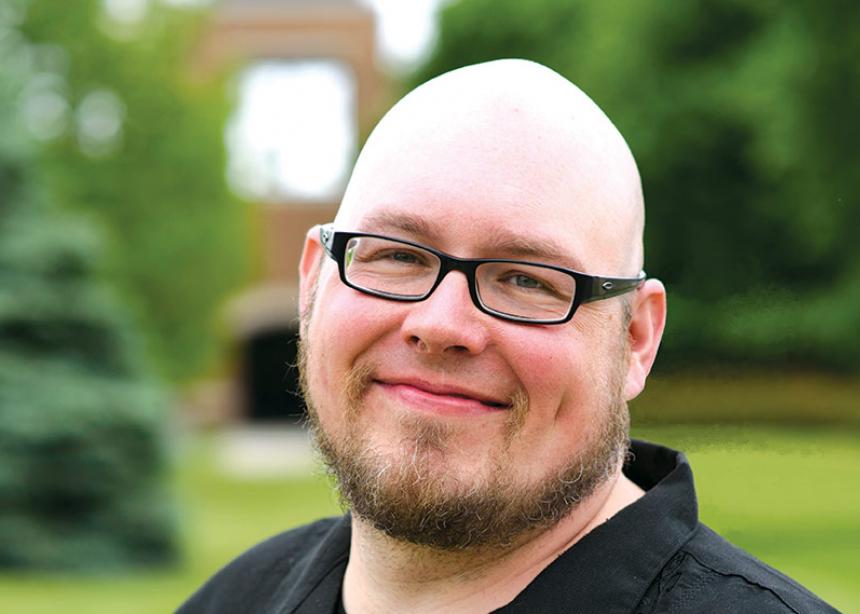 Seventy-four-year-old George Ediger rushed out of church during the final song and caught up with the newcomer in the parking lot before the big young visitor with the shaved head and biker beard could escape in the maroon hot rod that stood out among the grey and beige sedans.

That gesture of welcome, although not entirely welcomed at the time, was one of many that ushered Lee Hiebert along an unlikely path of transformation.

In a meeting with Lee the day before he started his job as pastor of Steinbach (Man.) Mennonite Church, his boxes of books are sitting at his front door, ready to move into his new office. “It’s pretty cool,” he says, brimming with anticipation rooted in a remarkable story of change.

‘I felt God had let me down’

Born into a troubled family that attended Foothills Mennonite Church in Calgary, Lee experienced an untenable contrast between what he heard in church and the abusive levels of conflict he experienced at home. When he was 11, his parents began a divorce that would drag out for two years until his mom decided to move with her two sons to Kelowna, B.C., where they had extended family.

He was bitter about the family he had been dealt, saying, “I felt God had let me down.”

In Kelowna, he attended a Mennonite Brethren church, but his life was headed away from God. He was aloof and snarky at church. “I was that kid you didn’t want to have in your care group,” he says.

After high school, a new world of opportunity presented itself, and Lee quickly chose options other than church. He delivered pizza and partied his tip money away.

Having left behind his upbringing, in the following years he created a new identity for himself. “I was a lean, 280-pound, six-foot-three guy,” he says. Although his tone is anything but intimidating now, he says he was “respected and feared” back then, imposing, as he did, his will on others and on life itself.

“I was the kind of guy who would walk into a bar and people would buy me drinks,” he says. “I was a bruiser.” To round out the image, imagine an ’86 Camaro with loud pipes, a stereo blasting AC/DC, and a 640-horsepower engine, which he recalls with evident fondness.

He had shaped himself into what he wanted. “I thought I could control things,” he says.

‘When are you coming back?’

The details of Lee’s life become graphic and cinematic, but he doesn’t want sensational anecdotes to overshadow God’s role. “The story I want to tell is how God has transformed me,” he says.

In 2001, his mom managed to get him to attend Canadian Mennonite University (CMU) in Winnipeg. But after a semester spent mostly in the “back 40,” he returned to his old life in Kelowna.

Eventually, cracks developed. At one point, distraught over the breakup with his girlfriend of six years and in need of support, he went to a party at a friend’s place. But his buddies said he was bringing them down and suggested he come back when he was feeling better. He stormed out, beginning to realize how alone he really was. He came to see what he had left behind—people who actually cared.

Things started to turn. Over the next four years he tried to “fix” himself in preparation for a return to church. He quit drugs and smoking. Friends from that scene dropped away.

Having abandoned the identity he had created, he didn’t know who he was anymore. “I didn’t know how to talk to people,” he says. He would eat all the food in his cupboard to avoid a trip to the store, where he would have to face people.

Eventually, he deemed himself ready for church, although the next step terrified him. It was 2007; Lee turned 27. He had been adrift for most of a decade. He tried two of the big churches in town, but never really connected with people there. His mom encouraged him to try Kelowna First Mennonite, but he considered it an “old person’s church.” She persisted, eventually taking him shopping for church clothes, because he “wanted to look the part.” Still, he was torn.

For several Sundays, he got in his car, slowed as he approached the church, but drove by, circling the block in his Camaro while the battle brewed within. “I’m not good enough,” he would tell himself. Yet he longed for the sort of caring church community he had tasted as a kid.

Connecting with the newcomer

Eventually, he made it as far as the back pew of First Mennonite, walking in late and leaving early to avoid contact. George Ediger, who loves connecting with newcomers, had noticed Lee in the back pew but didn’t catch him before he left.

On a subsequent Sunday, George says he was ready. “I had to run after him but I caught up with him at his car,” he tells me by phone from Kelowna. “We had a nice chat. I asked him about himself and his past and his understanding of God.” He visited Lee later that week. Although decades apart in age, George and Lee struck up a friendship that embodied the long-awaited embrace Lee experienced at the church.

First Mennonite was indeed an old people’s church. Most people were at least twice Lee’s age. They were also exactly what he needed. “When I walked in the door there, I immediately had 20 sets of grandparents,” he says. “The people of the church accepted me because I was a beloved child of God, and for no other reason,” he adds, his voice softening with emotion.

Still, it was scary. “I knew the hymns, I knew the traditions and I knew every one of those elderly women could see right through me,” he says.

“They saw God in me,” he says, but they also saw what held him back. Various church members, including Larry and Helene Wieler, spotted his reluctance to join the choir or stay for coffee, and they lovingly, persistently dug to the roots of his fear. They became mentors for Lee, walking him through the first years of his new commitment.

“This is the congregation that nourished me back,” he says of First Mennonite.

Becoming involved with the church and God

Lee joined Jacqueline Neun on the church’s education committee. While she struggled at first with his “my way or no way” approach, she came to value his contributions.

The first person Lee told about his return to church was his oma. Although she was too weak to open her eyes at the time, when Lee knelt by her bed and said, “Oma, I’m going back to church,” she simply reached out and embraced him.

In 2008, Lee was baptized. This stood as his solemn commitment to yield control of his life to God.

After the service, church member Harry Loewen approached Lee in the foyer, put his hand on Lee’s shoulder and said, “I think you’re gonna be a pastor.”

“I just laughed,” Lee recalls, but Loewen encouraged him to think about it. The seed was planted.

Lee says his mom and Neun encouraged him to go back to school. Although he was making good money delivering drywall, he needed to save for his studies. Neun, now 85, allowed him to move into her guest suite, despite her children’s doubts, to reduce his rent payments.

Eventually, he applied to CMU, although his earlier stint gave him pause. A school official promptly called to express excitement over his return. Neun—whose family had welcomed Lee as one of them by that time—gave him back the money he had paid her for accommodations. He bought an aging red Chevy truck from a church member, packed up and headed to school in Winnipeg.

Two years later, Lee took on a part-time pastoral assignment at Sargent Avenue Mennonite Church in Winnipeg, in addition to his studies.

In 2012, he married Rachel Enns, a fellow CMU student who became another in a growing list of people who accepted and cared for him despite his doubts that they would.

From Winnipeg, Rachel and Lee moved to Elkhart, Ind., where Lee attended Anabaptist Mennonite Biblical Seminary. He graduated this spring, and on Aug. 1 he loaded his boxes of books into his car and took them to the lead pastor’s office at Steinbach Mennonite in southern Manitoba.

Neither Harry Loewen, who foresaw Lee’s path to ministry, nor his oma are alive to share this step with Lee, but he says that when he told his opa (grandpa) of his job, his opa had tears coming down his face as he said, “Lee, I’m so proud of you.”

Lee is still 6-3, although not as lean as he once was, and he still has a shaved head, but his beard is tamer. The Camaro gave way to a Cruze, but he still likes to put on the leather and go for a “rip” on his Harley (which his mom calls his “throwback”). He may not look like a pastor on his bike, but that’s what he is.

“They’ve got my name on the door,” he says of his new office. “It feels great.”

Lee is eager to “bear witness to the transforming love of God that is so evident among the people of God.”

Predictably, back in Kelowna, the warmth flows. Jacqueline speaks glowingly about Lee’s recent visit and his “new maturity.” And George says of Lee’s new role: “Isn’t that wonderful! We certainly wish him well. I think he’ll find ministry a joyful adventure.”

See also “The kids are all right … aren’t they?” to read about one scholar’s work on emerging-adult faith development.

More stories about the journey to ministry:
Outside his comfort zone
Flipping on the pastor switch
Remade from the inside out
Letting Christ abide, from Saskatchewan to Gambia
From Mexican Quaker to Canadian Mennonite
Called to be a part of the church 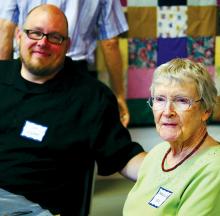 Lee and Rachel Hiebert with their Harley. (Photo courtesy of Lee Hiebert)

I am Lee's auntie. I haven't see him since his parents' divorce. There have been many times over the years that I have thought about Lee and his brother Kyle. And whatever happened to my sweet nephews! Well, now I know! God has been faithful in holding you in His hands, even if you didn't know it!
The prayers of your grandparents and aunts and uncles has not been in vain. Love you, Lee! May God bless you in this next chapter of your life!