Passion for activism spurred by interest in gender, racial equality 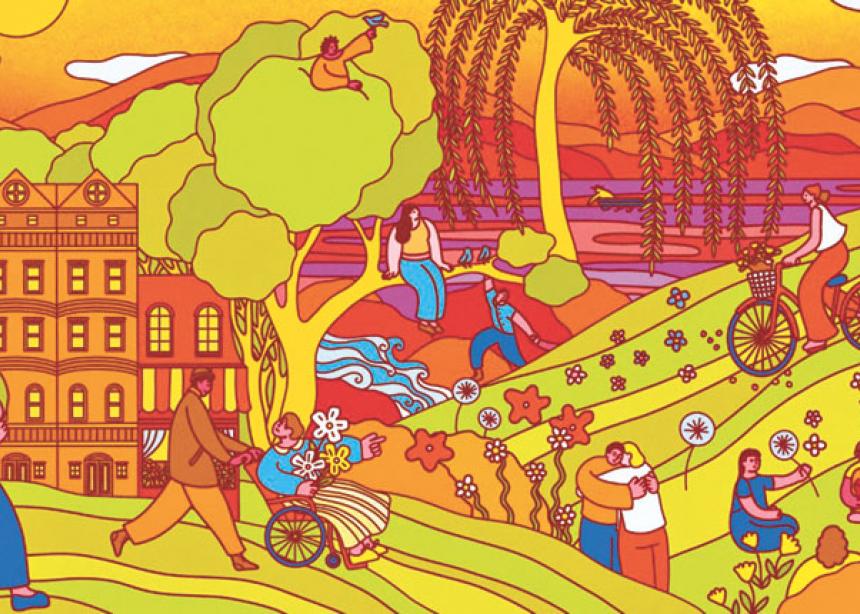 Dona Park designed the cover art for Mennonite Church U.S.A.’s study program, ‘Defund the Police? An Abolition Curriculum,’ meant to help Christians think about police abolition within a biblical context and as a practical alternative to policing. (Artwork by Dona Park)

Dona Park, a young Korean-Canadian artist, is one of the first two recipients of Mennonite Church U.S.A.’s #BringthePeace Award, sponsored by the denomination’s Church Peace Tax Fund. Park, who affiliates with Emmanuel Mennonite Church of Abbotsford, B.C., and Michelle Armster of Wichita, Kan., received the awards, recognizing the work of denominational peacemakers. The two winners were each granted a modest stipend.

An illustrator and graphic designer, Park was born in Korea and has lived in both the United States and Canada. She is a 2017 graduate of Goshen (Ind.) College and a former intern at ReconciliAsian, a Los Angeles-based organization that promotes peace issues among Asian communities in North America.

She has worked intensively on art for peacebuilding initiatives with Women Peace Makers in Cambodia, and is a co-author of Navigating the Nexus of Art and Peace.

More recently, Park has worked with MC U.S.A. to create art for several peace and justice initiatives, including. “Laboring Toward Wholeness: A Training on Dismantling Patriarchy,” and “Defund the Police? An Abolition Curriculum.” She also designed the logo for the 2020 MC U.S.A.’s Women Doing Theology webinar.

“I think we tend to associate peace as being nonconfrontational, being passive, being silent in the face of conflict, because we don’t want to ruffle any feathers,” says Park of her views on peacemaking. “We don’t want to become the whistleblower or change the status quo. I think we need to redefine peace as actively participating and dismantling abusive and oppressive systems.”

Park says her interest in peace issues developed during her time at Goshen, where she began to view such topics as environmental activism and gender and racial equality as peace issues. “If I say I’m advocating, I have to initiate activism,” she recalls thinking. “It’s who I am.

“All of these issues, particularly with gender and racial inequality, are intersectional to my identity. It is a privilege to disassociate from these problems or call it political. However, for most marginalized people, an intersectional identity is not a political choice. It just is.”

Park hopes that North American churches can continue to grow and change with regard to inclusion, saying: “I hope that Mennonite institutions/North American churches can structurally change, not be satisfied with one or two colourful people as a justification for multiculturalism, but aim to develop strong support systems for ethnic and racial minorities and have ‘listening’ be a cornerstone for restorative justice.”

Sue Park-Hur, MC U.S.A.’s denominational minister for transformative peacemaking, says of the granting of this award: “We need to acknowledge and honour courageous peacebuilders who have faithfully paved the path of peace. We also need to encourage and be inspired by younger leaders who are shaping creative ways to communicate the peace of Jesus. We hope the #BringThePeace award is one way we can recognize peacemakers in our midst.”

Park credits and thanks Park-Hur, who has been a mentor, for nominating her for this honour, acknowledging that Park-Hur’s connections in Mennonite circles have helped her gain some recognition for her work, which can be difficult for someone in her position: a young adult of Asian descent without traditional Mennonite connections.

With files from MC U.S.A. Do you have a story idea about Mennonites in B.C.? Send it to Amy Rinner Waddell at bc@canadianmennonite.org.

Dona Park designed the cover art for Mennonite Church U.S.A.’s study program, ‘Defund the Police? An Abolition Curriculum,’ meant to help Christians think about police abolition within a biblical context and as a practical alternative to policing. (Artwork by Dona Park) 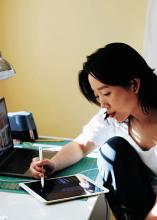 Dona Park is an illustrator who lives in Abbotsford, B.C. (Photo courtesy of Dona Park)