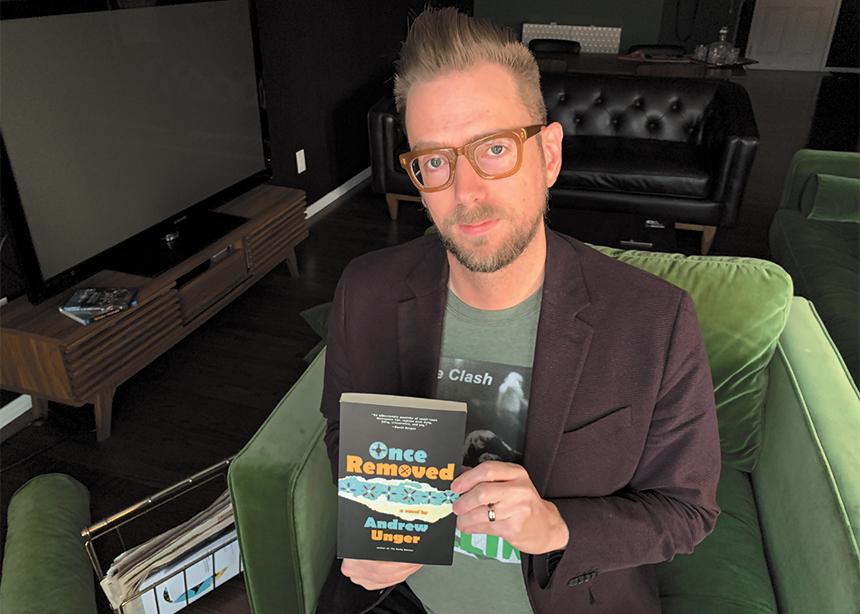 Andrew Unger shot to fame after creating the Mennonite satire website, “The Daily Bonnet.” Now he is branching out, adding to his repertoire a longer feat: his first novel.

Once Removed was published by Turnstone Press in September. The story follows Timothy Heppner and his life in Edenfeld, a small Mennonite town. He is a frustrated ghostwriter, haunted by the threat of going broke, and caught between being a member of the community’s Preservation Society and working for the mayor’s Parks and “Wreck” department, which is determined to chuck out the old and bring in the new. Heppner’s struggles increase when he is hired to write an updated version of Edenfeld’s history and he must figure out how to tell this life-changing story.

Unger lives in Steinbach, Man., where he attends Grace Mennonite Church and teaches English at Steinbach Regional Secondary School. His writing has appeared in Geez, Rhubarb, the Winnipeg Free Press and CBC.ca, to name a few.

He has written more than 1,800 satirical news articles poking fun at Mennonite life for “The Daily Bonnet.” The online publication has had more than 10 million visitors since its launch in 2016 and its headlines were read in the House of Commons last year in support of a motion to establish a Mennonite Heritage Week.

Unger drew inspiration for the novel from his increasing interest in Mennonite history. “Writing ‘The Daily Bonnet’ over the past few years, I’ve gotten more interested in Mennonite history and even theology and the history of, in particular, southern Manitoba and my own family,” he says.

Learning about villages founded by Mennonites in southern Manitoba that no longer exist, save for an occasional crumbling cemetery, sparked his reflections on the battle between preservation and progress, one of the book’s key themes. “But I don’t think it’s just a simple dichotomy there. I think the book explores nuanced definitions of those things,” he says.

The name Once Removed references this idea, alluding to the removal of buildings. Yet the title can be interpreted in numerous ways; the author has thought of at least four or five. Its connection to genealogy is one. Unger laughs as he describes a scene in the book in which a married couple discover they are distant cousins and pin the database printout above their bed. He emphasizes that the book deals with serious issues but is ultimately a comedy.

This debut has been long anticipated—Unger started working on the first draft about six or seven years ago, before he started “The Daily Bonnet.” He worked for two years with his editor at Turnstone Press, Sarah Ens, and the end result is remarkably different than when he began.

“The Daily Bonnet” shaped the book’s transformation, too. Unger showed a comedic aptitude at a young age, drawing Brian Mulroney political cartoons at 12, and developing a reputation for clever jokes in high school. “Writing ‘The Daily Bonnet’ also reaffirmed that humorous tone that I had as a kid; it brought that back into my writing,” he says.

The novel balances comedy and gravity, a skill he honed writing satirical articles. “In some ways, [the book] is similar to satire, in that, in proper satire anyways, there’s humour but there’s also some sort of point that’s being made. So I think the book shares that with the better articles on ‘The Daily Bonnet,’ ” he says.

And for those wondering if there is anything funny left to say about Mennonites after the prolific publications of his famous website, Unger says, “The vast majority of the material is fresh . . . so there was at least a whole novel’s worth of stuff that had been unexplored.”

This article appears in the Nov. 9, 2020 print issue, with the headline “From internet fame to new novelist.” Do you have a story idea about Mennonites in Manitoba? Send it to Nicolien Klassen-Wiebe at mb@canadianmennonite.org.

Further reading from our Fall 2020 Focus on Books & Resources:
New hymnal will be ‘part of the fabric of our lives’
COVID clean-up leads to inspiring discovery
Living at ‘home together’
Pastor channels love of stories into children’s books
Fall 2020 List of Books & Resources 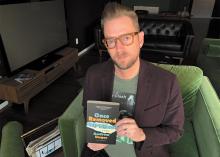 Call me an old curmudgeon, but having been through Armin Wiebe, Miriam Toews, and now, Andrew Unger, I'm bound to wonder if Southern Manitoba village-angst will ever have finally run its course. Perhaps the arrows fired by Toews and the "satire" of Wiebe and Unger provide necessary bridges from a village past, but I'm haunted by the observation that self-deprecation is cousin to self-loathing and for such self-satire to bear the name, Mennonite, has to be puzzling to all those who call themselves "Mennonite" without having been gristed through the Southern Manitoba village mill.

i always found the sausage from altona or winkler more satisfying than the creative writing. :-)

While the Bonnet does offer a few chuckles occasionally I wonder what the point of it all is.

As a recent arrival to this country I find that 2nd and 3rd generation Canadian mennonites have not an inkling of what struggles the fugitives of WWI and WWII went through.

The current display at MHM in Abbotsford BC does a great job telling their recent story, perhaps Mr Unger should visit ?

I don't see what the relationship between the fugitives of WWI and WWII to the Daily Bonnet or the new book by Unger is. Would you care to explain?