Move to Canadian office 'a blessing' 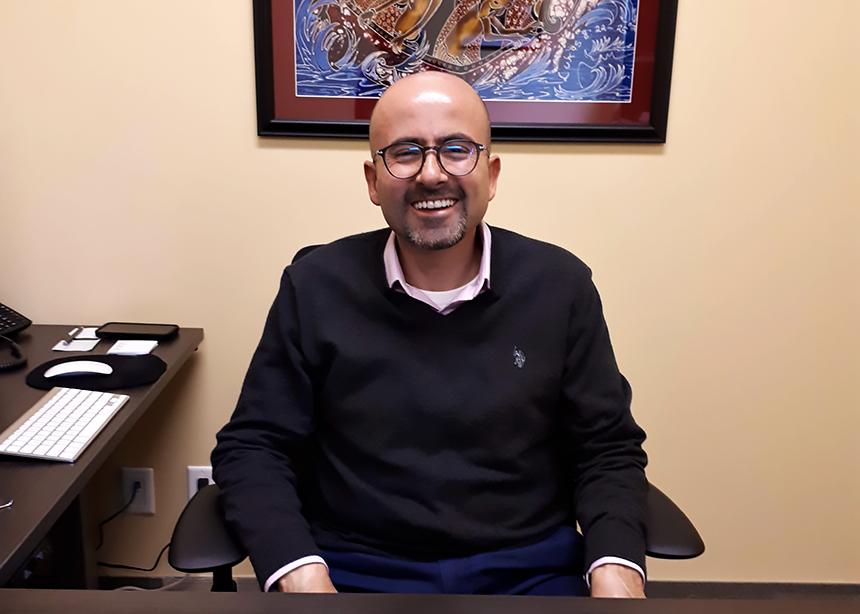 César Garcia, general secretary of Mennonite World Conference is pictured in his Kitchener, Ont., office, where he has been working for the past seven months. (Photo by Janet Bauman)

For César Garcia, general secretary of Mennonite World Conference (MWC), relocating to office space in Kitchener has “been a blessing.” He shares the office with four staff, some of the 40 people who work and volunteer for MWC around the world. MWC shares space at 50 Kent Avenue with staff from a variety of other Anabaptist related organizations.

When Garcia began as general secretary in 2012, he was the first person from the Global South to hold the position. The head office of MWC moved from Strasbourg, France, to Bogotá, Colombia, where he lived at the time, to reflect that shift. But in February of 2019, the head office moved again, this time to Kitchener.

Garcia sensed that people in Colombia did not perceive his move to Canada as a negative thing. He sees MWC as having a “mobile office.” It has moved before and likely will again.

The move gives him easier access to a larger portion of the Anabaptist constituency and brings him closer to frequent flight paths, simplifying travel, which represents 50 percent of his work. It is a healthier arrangement for him and his family. He is joined in Kitchener by his wife Sandra, who works part-time in the MWC office. They have two young adult daughters.

For Garcia, it has “been very special” to work out of offices shared with so many agencies that are part of the global Anabaptist church.

He says it is a shame that there is a tendency in Anabaptist DNA to divide over non-negotiables, leading to fragmentation, duplication and competition. “We need to work against that part of ourselves,” he says. “Unity is a gift of the Holy Spirit . . . we live out with love and patience.”

It is the living out of that unity that excites him most. He acknowledges that many things can be divisive, but when Anabaptists focus on following Jesus in a ministry of reconciliation, love and peace, it is special to see what can be done.

For Garcia, MWC, which will be 100 years old in 2025, is “like a local congregation on a global scale.” Instead of being perceived as another agency or partner “competing for attention,” he wants MWC to encourage all Anabaptist organizations to share their resources and experiences.

He cites the MWC General Council meetings in Kenya as an example of the “impact that our churches have when we are working together.” It was so valuable for church leaders who don’t have the possibility of seminary training to gather and learn practical things like how to lead a meeting, solve conflicts, arrive at a consensus and do strategic planning.

Looking ahead, Garcia will be busy helping to plan the next MWC assembly in Indonesia in 2021. Another part of his work is supporting churches living with persecution or facing the devastation of a natural disaster. In responding to suffering, he says it is so important for agencies to work well together.

For Garcia and his wife, moving to Kitchener seven months ago did feel like “starting from zero.” Furnace filters, water softeners and snow shovelling were new. The cost of living is high in Canada, and there was a lot of legal documentation required. But they were moved by the welcome they received from their neighbours.

They have visited Mennonite, Mennonite Brethren and Be in Christ churches, and are looking to find a church home in the area. 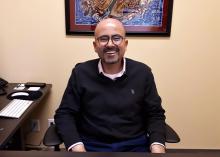 César Garcia, general secretary of Mennonite World Conference is pictured in his Kitchener, Ont., office, where he has been working for the past seven months. (Photo by Janet Bauman)