The most important word 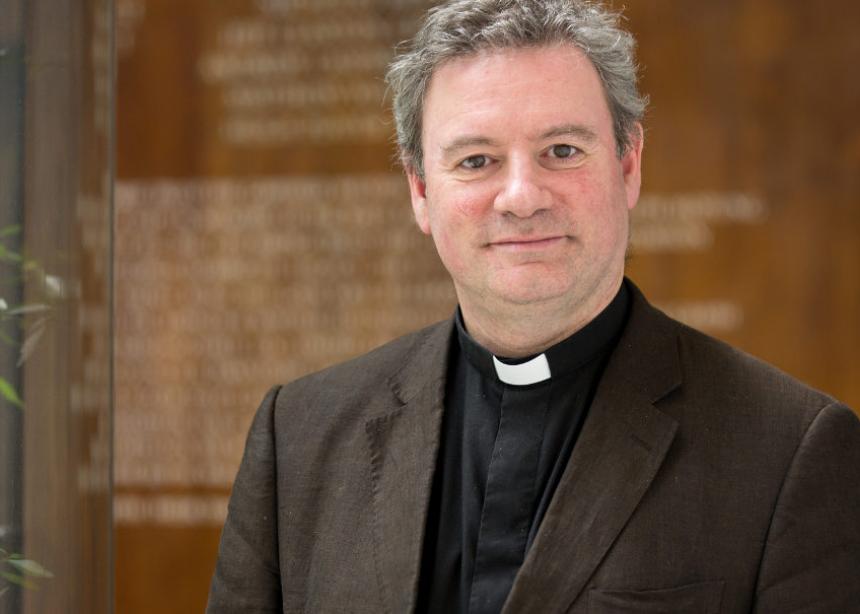 "With" may be the most important word in the Christian faith, Sam Wells argues in his book, "Incarnational Ministry." (Photo courtesy of stmartin-in-the-fields.org)

“With” may be the most important word in the Christian faith. So argues Sam Wells, an Anglican priest-theologian, in Incarnational Ministry, a book about being with the church.

In the chapter “Being with the afflicted,” Wells uses the children’s book, Now One Foot, Now the Other, that tells of Bobby, a toddler who is named after his beloved grandfather, Bob, who lives with the family. As Bobby grows, his grandfather patiently teaches him to walk, standing behind him and saying, “Now one foot, now the other,” hour after hour.

Then Bob has a stroke. Bobby has lost his best friend and he experiences a terrible ache and sadness. In a glorious reversal of the earlier scene, the story ends with Bobby saying to Bob the very words Bob had once so frequently repeated to his grandson: “Now one foot, now the other.”

The story eloquently states, “Being with the afflicted is primarily about accompanying a person through a process. The aspiration is not to fix a problem but to enter a mystery. It’s for the person not simply to ‘get better’ but to more richly enter into an experience of God’s kingdom.”

Wells engages in a creative reading of Burial Rites by Hannah Kent in the chapter “Being with the troubled.” Set in Iceland in the 19th century, Kent’s novel tells the story of Agnes Magnusdottir, sentenced to die for murder. There are no prisons in Iceland in the 1820s, so Agnes is kept over the winter with a family at a local farm, awaiting execution. Toti, a young Lutheran pastor, is assigned to visit her and prepare her for death.

Wells insightfully traces the struggle of this young pastor as he enters a world with which he has no experience, but much fear and self-doubt. But as Toti opens himself to really hearing Agnes, laying aside set prayers and carefully rehearsed words, he grows in faith, and Agnes experiences a kind of salvation. She is not saved from the axe but she is saved from the misery of a world of deceit, bullying and violence, and finds, in her final weeks, a world of truth, integrity, kindness and trust.

In the chapter “Being with the hurt,” Wells tackles the issue of peacemaking or reconciliation. Anabaptist Mennonites will resonate with his analysis of alternatives to peace: fantasy, oblivion, violence and his stout doctrine of the church.

He writes: “Wounded parties seek to tell a truthful story, make penance . . . and enter into repentance, forgiveness, reconciliation, healing and resurrection. The word for that process is church.” Although the church often fails, its permanent obligation is to live out the truth of Ephesians 2:14-16, to be Christ’s agents in bringing about reconciliation in the church and world.

This exceptional book, imaginative and demanding, challenges us all by providing a fresh sense of things we thought we knew well, both old and new.

Garth Ewert Fisher is the chair of MC Saskatchewan’s Pastoral Leadership Commission and the pastor of Mount Royal Mennonite Church in Saskatoon.

Read more From Our Leaders columns:
Things I noticed at Gathering 2019
Building resource connections
Church relations on so many different levels
A conversation with a Buddhist
Walking together

"With" may be the most important word in the Christian faith, Sam Wells argues in his book, "Incarnational Ministry." (Photo courtesy of stmartin-in-the-fields.org)