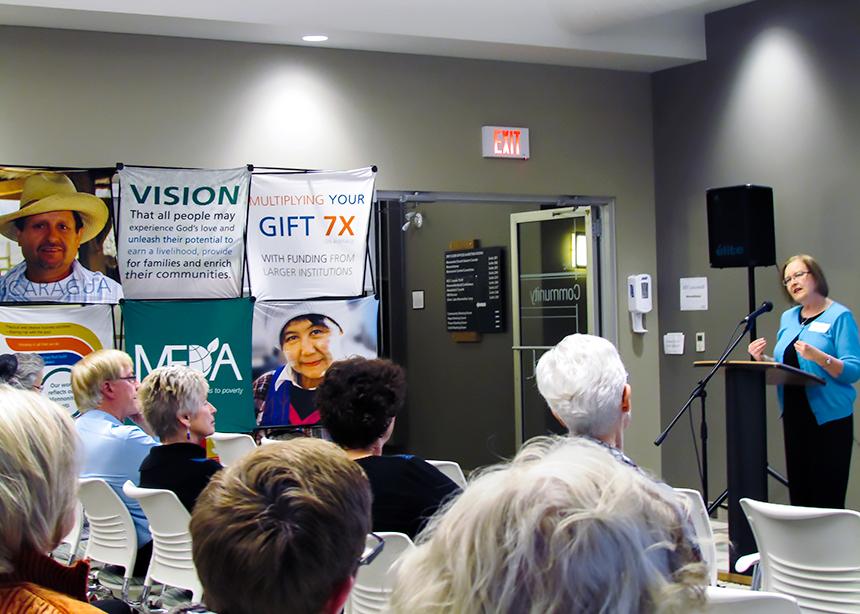 For Nancy Mann, one of the charter members of WEW, it is a meaningful combination. She got excited about WEW at MEDA’s 2016 convention, at which she first heard about chapters in the United States. She felt certain there were women in Waterloo Region who would be interested in forming a similar network. In early 2017, she, along with five other women, launched the Waterloo Region chapter, following a model provided by MEDA.

The group, which is open to all women, meets quarterly to connect socially and learn from a MEDA speaker who describes a project that supports women in developing countries. WEW participants are then encouraged to donate money to that particular project.

As a retiree, Mann misses the collegiality of the workplace, so she appreciates the network of women friends she has made through WEW’s Waterloo Region chapter, as well as the sense of meaningful purpose in knowing that improving the lives of women in developing countries has a profound, positive impact on the well-being of their families and communities. She is so encouraged to hear stories of women learning all aspects of running a business, becoming trainers, mentors and role models for others, and even moving into politics to impact change on a wider scale.

Mann sees her involvement with WEW as “an opportunity to give back.” She says that, in Canada, with its socio-economic advantages and its legal protections for women, there are now many professional women and retirees who have become economically successful and have resources they can share.

While there are many things that could be done with those resources—travel, home renovations and giving to many other worthy causes—she expresses “immense gratitude for vocational opportunities [she] had . . . here in Canada,” and wants to “enable other women . . . to support their families through improved economic opportunities.”

MEDA’s faith-based foundations, and the Gender Equality and Social Inclusion lenses through which it engages its mission to “create business solutions to poverty,” resonate with Mann and WEW’s Waterloo Region chapter.

According to Mann, when MEDA’s values—such as justice, respect, partnership, dignity, equality and sustainability—are integrated with decisions about economic opportunities, the results are “flagship examples” of development work.

One MEDA project in Myanmar that WEW heard about is called Improving Market Opportunities for Women. Aimed at “increasing women’s participation in the country’s evolving economy,” the project offers business assistance and matching grants to help women who are farming or running shops, to expand their supply chains.

WEW’s Waterloo Region chapter averages around 30 women at its meetings, held in the community room at 50 Kent Avenue in Kitchener. Meetings begin with a half-hour of connecting over refreshments, often with an international flavour, before hearing the speaker for the evening, and collecting donations.

There are two meetings left, on Oct. 3 and Dec 5. At the December meeting, Dorothy Nyambi, MEDA’s president and chief executive officer, will address the group on the topic of women in leadership. Nyambi, a dual citizen of Canada and Cameroon, has more than 20 years of experience in development work around the world.

Related stories:
The zucchini principle
Giving in the digital age
Money and the Menno millennials
Why your church needs to talk about money 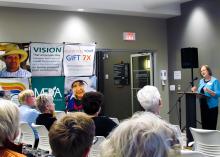