Walking humbly with God and artists 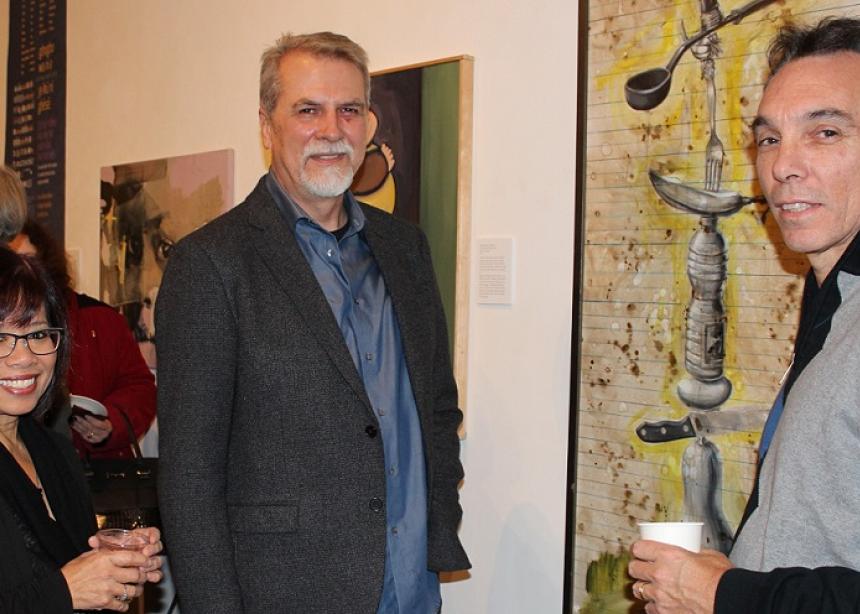 A nativity painting by Winnipeg artist Lynda Toews brings attention to Joseph’s commitment to God, and to the bond between farm animals and people. The donkey’s dorsal strip forms a cross pointing to Baby Jesus.

Her 2014 painting, “The commitment,” is part of the Mennonite Heritage Centre Gallery’s 20th anniversary exhibition that features 76 artists who have been involved in one or more of the gallery’s 160 exhibitions. The exhibition ends Nov. 10, 2018.

“This gallery gives me, as a female Mennonite artist, opportunity to display my work,” said Toews at the gallery’s fundraising event on Oct. 12. “It is an affirming and encouraging place. This gallery is much more than art for art’s sake. It is about art for justice, art for community, art for life.” (See more about her work here.)

Speaking at the event, Ray Dirks, the gallery’s founder and curator, received a standing ovation when he concluded his talk about the many multi-faith and multicultural relationships that have been developed and nurtured through art exhibitions, books, school presentations and other interactions.

“I pray my wavering direction has been ultimately pointing towards God and following what I should be doing,” said Dirks. It is his prayer that both he and the gallery reflect justice, kindness and humility, as stated in Micah 6:8: “And what does the Lord require of you? To act justly and to love mercy and to walk humbly with your God.”

In the 1990s, Dirks was a freelance curator who provided opportunities for African artists to show their work at exhibitions in Canada. When the education grants for these exhibitions ended in the late 1990s, he had asked Ken Reddig, the heritage centre’s director, if he could develop an art gallery in an underutilized space in the building.

Dirks was given permission to develop the space into a self-supporting gallery. A few months later, he secured a three-year funding commitment from three donors: DeFehr Foundation, the P.W. Enns Family Foundation and Arthur Block.

“With that promised $35,000 a year and a dream shared by Ken Reddig, I became Mennonite Heritage Centre Gallery curator in August 1998,” Dirks told the crowd. “The first several years, the gallery hung on by a financial thread. I would often be planning up to two years ahead, knowing we had next to no money, maybe enough to cover expenses for a month of two, praying and hoping donations could be found to carry on.”

He explored the possibility of getting financial assistance from the Winnipeg Foundation to furnish an office, improve lighting and develop the space into a gallery. The initial response was that the foundation does not fund religious institutions.

At a meeting with the foundation, he had explained that the gallery’s mandate was to develop a place where artists from all churches and faiths can express themselves in an openly Christian institution, where diversity can be celebrated and embraced, and where artists can bring attention to issues that touch the lives of marginalized, ignored and forgotten communities.

He received the funding to develop the space into a gallery. The foundation also helped fund “In the spirit of humanity” and “Leap in faith” projects. Both of these multicultural and multi-faith projects were undertaken by Dirks and Manju Lodha, a Winnipeg artist and author who is a member of the city’s Hindu and Jain communities.

The gallery has also promoted work from artists from Sudan, Cuba, Indonesia and Iraqi Kurdistan.

One of Dirks’s early exhibitions, “In God’s image: A global Anabaptist family,” not only toured in Canada and the U.S. but also in Europe and Africa.

Winnipeg artist Anthony Chiarella said that it is important for him to display his artworks that reflect his Catholic faith in a Christian gallery. His artwork on themes such as the crucifixion, saints, crosses and church sacraments have been part of about eight or nine exhibitions at the Mennonite Heritage Centre Gallery.

“There is nothing in Winnipeg that is comparable to this gallery,” he says. “It would be a big loss to Winnipeg if this gallery wasn’t here.”

A video of the 20th anniversary program can be viewed here.

Eleanor and Al Hamm of Steinbach, left, are pictured with Winnipeg artist Lynda Toews at the Mennonite Heritage Centre Gallery’s 20th anniversary fundraising event. Toews painted the nativity scene from her photograph of people from Grace Mennonite Church in Steinbach: Al is the shepherd on the left, Eleanor Hamm is one of the wise men whose face has been changed, John Peters is Joseph, Alyssa Lord is Mary, and Gary Brown is the faceless shepherd on the right. (Photo by Gladys Terichow)