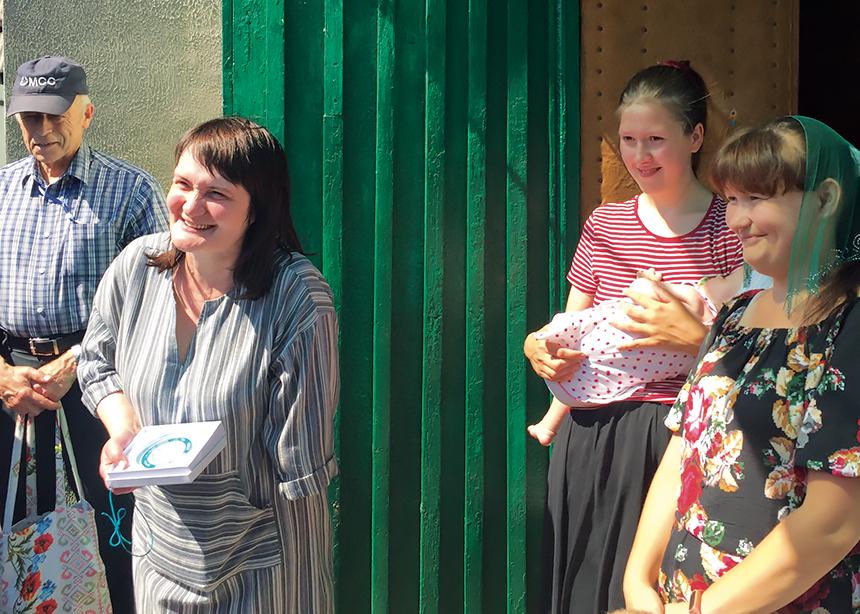 Natalia Mezentseva oversees a household of “women in difficult circumstances.”

With an affirming and instructive place to live, thanks to a Mennonite Central Committee (MCC) partner, their circumstances are better already.

A group of visitors on an MCC learning tour heard their stories, cuddled a baby, applauded a child’s poetry recital and prayed with them on June 21.

Viktoria Mikitenko, a 22-year-old with a four-year-old son, said she had struggled with drug addiction. “I want my life to be changed,” she said. “I returned back to God.”

Viktoria Rabchenyuk, 23, holding a baby girl, said she had been “deprived of parental rights” to her older children. “I came here to restore my life,” she said.

“We serve people our society doesn’t need, doesn’t want,” said Mezentseva, who directs the organization. “People say it’s their own fault, that they deserve it. But we know they want to get to a better place in life.”

In mid-June, six women and four children lived in the house; there’s another house for men.

“We give the canned meat to large families with many children in difficult life situations—and in Ukraine there are many such families, due to war and the collapse of the economy,” Mezentseva said.

A flight from war

The war in eastern Ukraine brought Pyotr Sidorovich to New Life. The 75-year-old fled Debaltsevo with his daughter, who has cerebral palsy, when clashes between Ukrainian government forces and pro-Russian separatists ravaged the city.

He described hiding from the shelling in a cold, wet basement and emerging to find their house destroyed. Leaving everything behind, they drove to Nikopol, where they lived with his sister before finding an old house that at first had no heat.

Four-and-a half years later, it’s “like a bad dream,” he said. “My wife cries. It feels like we are homeless. The hardest thing is that there is no light at the end of the tunnel.”

At New Life he receives material assistance and, also vitally important, moral support. Due to the responsibility of caring for his daughter, he doesn’t get out much. “I can ask for advice, and they never refuse to help,” he said. “You can’t put a price on it.”

Mezentseva describes New Life’s ministries as material, spiritual and psychological. This includes advocacy for the disenfranchised—people who might not be treated fairly.

Some of those in need, such as ex-prisoners or people infected with HIV, lack the registration required for various services. They might be denied a hospital bed or discriminated against when looking for a job.

“If we go with them, they get a better response,” she said.

Five days a week they serve meals to about 70 people at the New Life office, which also runs a sewing business that provides jobs for several women.

“In each can of meat and each blanket, we see God’s love and your love,” she told the visitors. 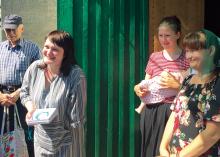