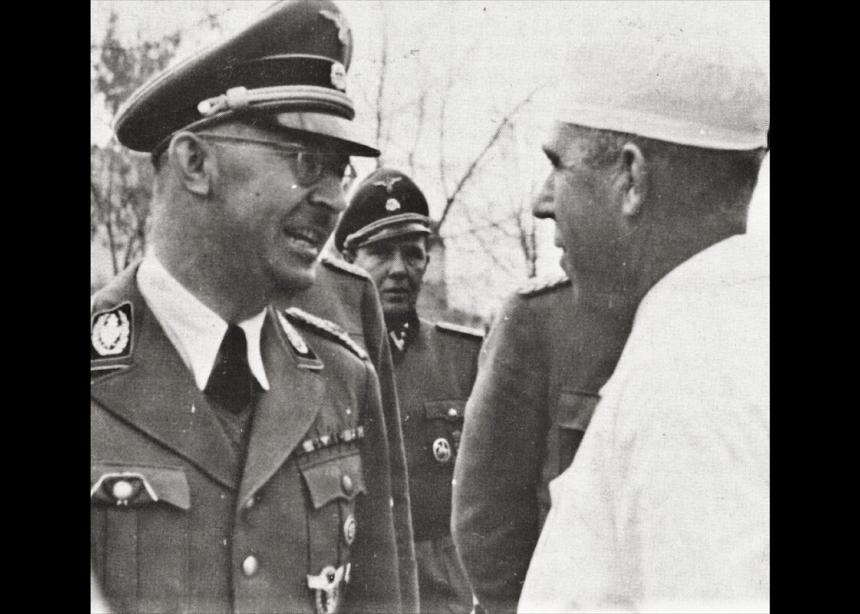 Mennonite Central Committee (MCC) has initiated research into how national socialism (Nazism) shaped the contexts in Europe and Paraguay where MCC operated in the 1930s and ’40s, and how, at the time, MCC engaged with the German National Socialist government and worked to resettle Mennonite refugees from the Soviet Union.

At MCC’s invitation, 11 academic historians from Canada, the United States, Germany, France and the Netherlands are researching MCC’s work in Europe and Paraguay before, during and after the Second World War. They will build on previous research and bring their individual scholarly specializations to bear in examining actions MCC and its staff undertook during this period and how they wrote about those actions.

“MCC is committed to developing a deeper understanding of this part of our history, and to reckoning with it once the research is complete,” says Ann Graber Hershberger, executive director of MCC U.S.

“National socialism” describes the ideology of Germany’s ruling Nazi Party at the time, marked by virulent anti-Semitism that led to the Holocaust of six million Jews in Europe. “MCC rejects and repudiates anti-Semitism,” says Rick Cober Bauman, executive director of MCC Canada. “Like the injustices visited upon other people groups, anti-Jewish actions and attitudes need to be named, confronted and ceased. We are eager to see what we can learn from the researchers’ work.”

Recent scholarly articles have spurred MCC’s desire to learn more about this history and to grapple with the significance of it. The research project is focused only on the activities of MCC, acknowledging that MCC’s history is entwined with, and not easily separated from, the history of Mennonites in Paraguay, Europe and the Soviet Union during this period.

The research will be presented at the Sept. 30-Oct. 2 “MCC at 100” conference at the University of Winnipeg (held in collaboration with Canadian Mennonite University and MCC), and will be published, including in the fall 2021 edition of MCC’s Intersections journal.

Alain Epp Weaver, Intersections co-editor and MCC director of strategic planning says, “Countless displaced Mennonites directly helped by MCC after the Second World War were kept from certain death or deprivation if they would have been returned to the Soviet Union, from which many had fled a few years earlier.

“This real account nonetheless is not the complete picture. We are seeking to further round out our understanding and determine potential next steps to address this complex history.”

Kuddos, MCC, for beginning to face part of our history that may be quite shameful.

Thanks MCC leadership for beginning to seek to tell the difficult truths of our past. This is not just about MCC. It is about our legacy of faith as Anabaptist Mennonites. The truth (and repentance) will set us free.

Already the word shameful is being used before we even start ! Canadian Mennonites who did not have to escape Soviet communism should be very very careful before commenting.

If it wasn’t for the German army offering some protection my parents and 12,000 others would have been sent to Siberia like my grandfather was and perished. Think about that !

There are historical societies everywhere that have the expertise and interest in history. I hope that MCC is hiring professional historians. Why is MCC diversifying into history? Many count on MCC to meet human needs, like clean water, sanitation, and so much more. There are so many needs in the world, including needs here in Canada. What agency is carrying on the work of meeting needs and setting up new things so that people can meet their own needs. I think that MCC should communicate with the constituency (us), as they used to call it, to answer the questions that this article does not cover.

Fascism by any other name …

Mennonite Central Committee has intentions to research “how national socialism (Nazism) shaped the contexts in Europe and Paraguay … and how at the time, MCC engaged with the German National Socialist government and worked to resettle Mennonite refugees from the Soviet Union.” MCC is intent on “developing deeper understanding of this part of our history, and to reckoning with it once the research is complete.”

This could be a useful endeavour if MCC is committed to go beyond the “who did what” in the actions of the Mennonite historical narrative, and if MCC seriously examines why Mennonites felt compelled to engage in the evils of fascism.

Merely knowing who did what, when, becomes an academic information gathering exercise, and will likely have no effect on anyone or anything other than to provide a few extra chapters in the history books and provide employment for a few historians.

I think we need a comprehensive overview of what fascism really is. We need to know how our theology and our ontology (way of being) contributed to our participation in the evils of fascism. We need to understand thereafter to what extent our current theology and ontology lends itself to further participating in fascism as it is currently developing in North America in the 21’st century.

Fascism is largely a result of economic disparity between classes. One of MCC’s primary efforts/intentions in Europe was to resettle Mennonite refugees fleeing from the chaos of the Bolshevik Revolution and the resulting chaos in the Soviet Union. There were strong reasons as to why the Mennonites were fleeing.

Since their arrival in Russia in 1789, Mennonites were seriously engaged in what can now only be called a fascist pursuit of mammon, building empire, amassing wealth, and they did a great job of it too. The Russian peasant/serf workers (freed from serf/slavery in 1861) were keenly aware of the incredible economic disparity and injustice between Mennonite kulaks/landowners/businessmen and the Russian peasant. Once the Bolsheviks began to address the economic injustices through violence, the Mennonites fled.

Fleeing violence is not absolutely necessary, however when a sect has adopted a theology of pacifism, being a “peace church,” then in the face of violence it becomes a choice of staying and dying for ones’ beliefs or fleeing. When dying is not preferred but fleeing wealth and empire is difficult, then it is equally important that a pacifist church align itself with a political power able to provide protection and safety. Mennonites were aligned with Czarist Russia since 1789, however that political entity lost power to the disgruntled Bolsheviks and Mennonites lost both wealth and country. The Mennonite engagement in and promotion of economic injustice was itself a “fascist” action and played a large part in Mennonites seeking support from Germany after WWI.

A perception/belief of superiority is another important component of fascism. Germany of the 1930’s welcomed the Mennonites. Living in “closed communities” in Russia for approximately 150 years, Mennonites retained and developed language and cultural ties to Germany. To identify with the German “Volkgemeinschaft” (people’s community) movement was considerably preferable to identifying with the putsch of the boorish Russian Bolshevik (the Majority).

German superiority was evidenced in the pseudo-scientific popularity of eugenics resulting in racial superiority and anti-Semitism. Pure blood lines combined with a “back to the land movement” (Spengler/Darre’s “blut und boden,” blood and soil) connected economic and agrarian policies to racial superiority. Mennonites could readily identify with both concepts. Hitler and his Nazi party, intent on establishing pure bloodlines, found that the “Mennonites were more German than Germans themselves.” Mennonites were not averse to being part of a movement which recognized the very traits of superiority and agrarian qualities they themselves had fostered in Russian for a century and a half at the expense of the Russian peasant.

Another component of fascism seems to be a rejection of “rationalism.” Post-Enlightenment rationalism with its focus on reason and knowledge (Descartes ‘I think therefor I am’) as guiding principles underlying beliefs and actions, was in stark contrast to religious belief which prior to the Enlightenment had dominated Christiandom. Mennonites were fleeing the Soviet Union with its anti-religious Communist ideologies and could integrate into a German Volks movement with its promising burgeoning backlash to modernity.

The Russian Anabaptist Mennonite Christianity/ideology itself becomes susceptible to and complicit in fascism. Dorothee Soelle (1970’s German liberation theologian) coined the term “Christofascism,” with the recognition that Christians are encouraged to impose their beliefs upon other religions, cultures, and politic, portraying Jesus primarily in the light of personal salvation, with an authoritarian fundamentalist theology of the “true” nature of God. This fundamentalist imposition of belief provided an easy identification of the “non-believer” and an easy step to condoning/rationalizing violence, anti-Semitism, racism, and tyranny.

It seems Russian Mennonites were primed to embrace the fascism of Germany in a variety of ways. Russian Mennonites were fleeing the Soviet Union, in large part because the peasants of Russian would no longer be the victims of the Czarist regime, which included Mennonites with predilections towards economic elitism, anti-rationalism, religious fundamentalism, and racial superiority.

Russian Mennonites came to a National Socialist Germany with pre-determined fascist tendencies which seemed to fit in with the Nazism movement post-WWI. It is not surprising that some Mennonites, or perhaps many, participated in the evils of Nazism.

It is a good idea that Mennonite Central Committee is willing to re-examine the role Mennonites played in National Socialist Germany. One would hope that their findings include a thorough explanation of the reasons why Mennonites found themselves in a difficult situation which predisposed them to participating in the evils of Nazism.

If we arrive at some understanding of the “why” of historical Mennonite participation in fascism, then these understandings can then be applied to an examination of the extent to which our current theological and ontological beliefs and practices continue to lend themselves to economic injustice and fascism.