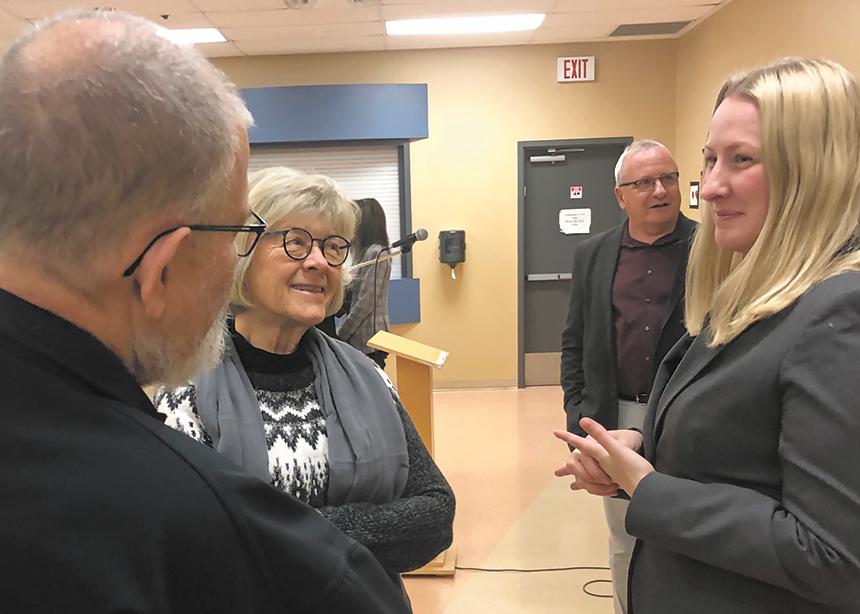 About 80 years ago, Jews and Mennonites lived peacefully together in the Ukrainian city of Khortitsa. Then the Nazis came, and everything changed.

Did the Mennonites know what happened to their neighbours? And did some help with the killings? Those were the questions addressed on Nov. 5 at a public lecture entitled “Jews, Mennonites and the Holocaust.”

The event, which was attended by an overflow audience of about 175 people, featured Mennonite historians Aileen Friesen, executive director of the D.F. Plett Historical Research Foundation, and Hans Werner, a retired professor of Mennonite history from the University of Winnipeg.

Friesen, who spoke about the experience of Jews and Mennonites under the German occupation, began her presentation by noting that the last major massacre of Jews in the region occurred in 1942 in the nearby city of Zaporizhzhia, across the river from Khortitsa.

About the same time as 3,000 Jews were being murdered, Mennonites—who were treated well by the Nazis because they were seen as ethnic Germans—were celebrating their newfound liberation from communist oppression at Easter church services.

“The image is stark,” she stated, of how Mennonites benefitted under German occupation while Jews were “subjected to unspeakable violence.”

While most Mennonites didn’t participate in the genocide against the Jews, some did collaborate, serving as mayors, police or other officials. Some were also members of local security forces that rounded up and murdered Jews.

For decades, Mennonite scholars “have struggled with issues of collaboration,” she said. But the recent discovery of records from the former Soviet Union provide “concrete evidence” of Mennonite participation in the Holocaust.

Since much of the new material comes from Soviet interrogation records from after the war, it has to be “treated with caution,” she acknowledged. But together with other historical records and recollections, it is “clear” some Mennonites aided the Nazis in killing Jews.

In his presentation, Werner dealt with the way Mennonites have remembered their wartime experience in the Ukraine.

Referencing memoirs written by Mennonites after the war, he noted that the Holocaust usually only makes cameo appearances. Most focus on Mennonite life before the Russian revolution, the subsequent loss and displacement under the Soviets, and their own suffering during and after the Second World War.

These memories are coloured by how the German invasion of Russia was “a relief from Soviet oppression,” he said, adding that they also fit neatly into “Cold War logic” after the war, when the Soviet Union was seen as the enemy.

Some memoir writers who mentioned the Holocaust promoted a sense of “equivalence between the killing of the Jews and Mennonite suffering [under the Soviets],” he said, or they blamed the Nazis for their deaths.

He praised Friesen and Werner for “facing the past directly and honestly,” and for taking a hard look “at what actually happened, without fear of what they are going to find.”

During a Q&A period, the two were asked why it has taken so long for this story to be told.

Werner replied that it is partly due to a new generation asking questions of their parents and grandparents, and also because some are feeling a need to tell their stories before they pass away.

It’s also “not a good story” to tell, he said, noting that even he was nervous speaking about it in a Jewish community centre.

Friesen added that it is also happening because of new historical records that have just become available in the last 10 to 15 years. “Now we can put things together,” she said.

At the end of the evening, Dan Klass, a member of the Jewish community whose parents came from the Khortitsa region to Winnipeg in 1913, noted the similarities between that community almost 80 years ago and Winnipeg today. Like back then, Winnipeg is a mix of Mennonites and Jews, he said, noting that relations between the two communities are good—despite this terrible history.

“We should celebrate and cherish this, and make sure Winnipeg is a place where it never happens again,” he said.

This article appears in the Nov. 25, 2019 print issue, with the headline "‘Jews, Mennonites and the Holocaust.’" Originally published in the Nov. 7 Winnipeg Free Press. Reprinted with permission of the author. 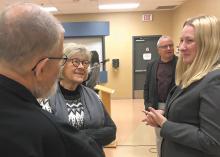 Thank you for reporting on an important chapter in the ongoing attempt to articulate a truthful history.

One observation: In the opening sentence, Brother Longhurst makes it sound like some idyllic Eden, this place Khortitsa. Is this not located in Ukraine where a decade before the famine/genocide known as the Holodomor left millions dead, and millions more scarred? And then the Great Terror?

Fracturing society was a state policy, and neither Jews nor Mennonites were immune from that pernicious evil.