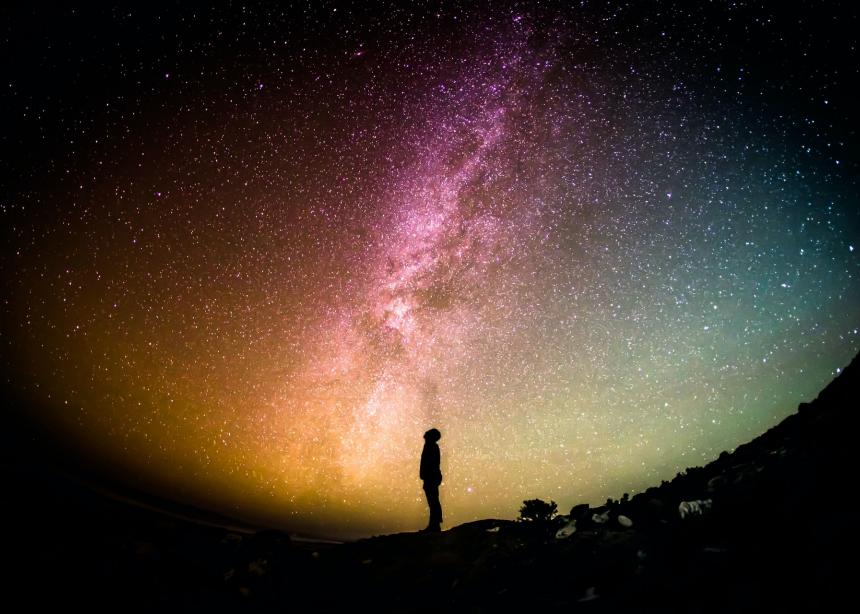 'I’m learning to pay attention to my gratitude level as a measure of my attunement with truth.' (Photo by Greg Rakozy/Unsplash)

I’m writing this on Jan. 18 and I’m wondering how tone deaf my article will seem by the time you read it. I have no idea what the world will be like in a few days, let alone a few weeks. Who knows what catastrophic event or pivotal moment in history will have occurred between now and early February?

Obviously, the world has always been unpredictable. That’s not new. What’s new is my deeper awareness of the unpredictable nature of it. I think we all feel this on some level. Anything could happen. The stock market could crash. Civil unrest could escalate into violence. A loved one could die. Our freedom could be taken away. Aliens could attack. A zombie apocalypse.

The Maple Leafs could win the Stanley Cup. Okay, I’m getting carried away, but there isn’t much at this point that would really surprise me.

If astronomers informed us that a comet the size of Luxembourg was on a collision course with Earth, or geophysicists warned us that every volcano on the planet would inexplicably erupt next week, I think my response would be, “Yup, that makes sense.”

I’ve pondered this new attitude of mine and I don’t think I’m becoming pessimistic or indifferent. I think I’m just acknowledging the indifference of the universe towards my survival and well-being. I’m not trying to be dark or discouraging here. I’m trying to live in truth. And I think this is an important truth to accept.

As I’ve written in previous articles, I believe truth is often paradoxical. Perhaps for too long I’ve been basking in the truth that I am loved, valued and deserve a good life, while ignoring the other side of the paradox, namely, the universe doesn’t care if I live or die.

I’m no historian, but it seems to me that most people in most cultures throughout history have been more aware of this unpredictable and indifferent aspect of reality than most Canadians living today. Many of us have the assumption that we are entitled to at least an opportunity to get whatever we want in life. I think this attitude would be perceived as bizarre, arrogant and delusional by the majority of human beings who have ever lived.

For example, most of the people we read about in the Bible seemed to live with the understanding that everything—their money, crops and livestock (food), possessions, children, freedom (if they hadn’t lost it already)—could be taken from them at any moment. They would grieve, but I don’t think they would be surprised.

As a theologian whose name I cannot remember pointedly asked, “Have you ever noticed that, when tragedy strikes, people in the Bible don’t ask, ‘Why, Lord?’ They know why. Tragedy and loss are part of life. Their response to suffering is not, ‘Why?’ but, ‘How long, O Lord? How long must we suffer?’ ”

I think there is an important truth being revealed to me through this pandemic. I’m becoming convinced that, when I accept the unpredictable and indifferent nature of the universe, it does not bring fear, it brings freedom. It helps me live more grounded in the awareness that not one thing, not one person or relationship, not one breath, can be taken for granted.

It might be clichéd but it’s also a profound truth that each moment is a gift. And as soon as I start treating anything, including the very moment I’m experiencing, as anything other than a gift, I’m no longer living in truth.

Troy Watson is a pastor of Avon Mennonite Church in Stratford, Ont.

'I’m learning to pay attention to my gratitude level as a measure of my attunement with truth.' (Photo by Greg Rakozy/Unsplash)