From grief to gratitude

Remembering the centennial of the Russian Revolution 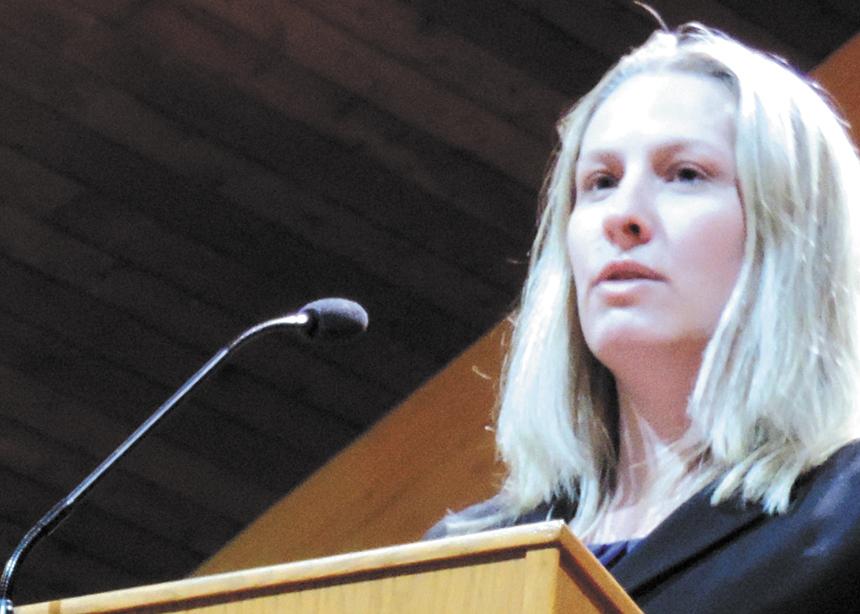 Historian Aileen Friesen speaks to a full house at St. Catharines United Mennonite Church at an event commemorating the centennial of the Russian Revolution. (Photo by Randy Klaassen)

Moments in time can change the course of history. Decisions made in Russia in the years following the Russian Revolution in 1917 changed life for thousands of Mennonite families.

On Oct. 13, 2018, an evening of remembering and thanksgiving took place at St. Catharines United Mennonite Church. Those who took part and those who attended remembered together the years of grief for their forebears in Russia and gave thanks for their lives in Canada a century later.

The idea for this event came from John B. Giesbrecht and, with the help of George Dyck, an evening of history and music was planned. The event was hosted by Randy Klaassen, the church’s pastor.

Music for the evening included a mass choir conducted by John Rempel and accompanied by Kathy Rempel, who performed Franz Schubert’s “Deutsche Messe.” The congregation sang “Holy God, We Praise Thy Name” and “Guide Me, O Thou Great Jehovah.”

A Russian folk song by soloists Renate Klaassen and Elizabeth Pereira, with pianist Shirley Dick and mandolin player Alan Teichroeb, told the story of a mother sewing a red party dress for her daughter, who doesn’t think she’ll ever wear it.

In May 1919, the Canadian government sanctioned an order-in-council that Doukhobors, Hutterites and Mennonites would not easily be assimilated into Canada and should be prohibited from entering the country. These groups were undesirable, Harder said, because of their peculiar customs, habits, modes of living and methods of holding property. This order-in-council was rescinded in June 1922, allowing Mennonites to immigrate to Canada. This decision allowed many of the parents and grandparents of those assembled to come to Canada, a decision that changed the course of many lives.

In her talk, “Out of the ashes of revolution, into the promise of Canada,” Aileen Friesen, co-director of the Centre for Transnational Mennonite Studies at the University of Winnipeg and executive director of the Plett Foundation, invited those in attendance to remember the major impact the Russian Revolution made on the course of their Mennonite history.

There were, in fact, two revolutions in 1917, she said. In February, Czar Nicholas II abdicated, which ended the 300-year-old Romanov dynasty. During the reign of the czars, Mennonites lived in thriving communities in the Russian empire, which they had built through their hard work, the good fertile soil and the booming wheat market. They started successful businesses, expanded their educational systems, sent their youth to study further afield, and became involved in politics, becoming mayors of large cities. But life was not all a paradise. There was a land hunger that divided the Mennonites into haves and have-nots, and religious divisions tore families apart.

The second revolution, in October 1917, saw Lenin take leadership of the Russian government. Life changed in the Mennonite villages. The Red Army took money and horses from Mennonite villages. Hostages were taken among Mennonite leaders, and millions of rubles had to be collected to secure their release. Executions took place for past crimes that had been fabricated. Groups of Mennonite men organized and armed themselves in self-defence units, patrolling village streets to protect people and property.

In the summer of 1918, Mennonite villages were caught between the Red and White armies and roving bandits. Villages were burned, families were massacred, and rapes, murders and pillaging was rampant. The full impact of the trauma of civil war was long lasting—no balm could heal these wounds. These were the conditions of 1918.

In 1920, the Red Army was victorious. Desperate for help, the Mennonites reached across their borders and the ocean to their American and Canadian families. The relief kitchens of Mennonite Central Committee, founded in 1921, fed all in need. And the need was great. Not only was the country recovering from the ravages of war, it was also in the midst of a widespread famine and a typhus epidemic. The first train of Mennonite immigrants left the Soviet Union in 1923.

More than 20,000 Mennonites were able to leave before the doors were shut. B.B. Janz, H.H. Ewert, David Toews, A.A. Friesen and Gerhard Enns were instrumental in helping with transportation, lodging, travel credit and so much more.

Today, through the opening of the KGB secret police files in Ukraine, Russian Mennonites are able to retrieve information about many of their families and leaders who remained and disappeared in subsequent years, especially during 1937 and 1938. (See “UWinnipeg Fellowship to crack open KGB archives.”)

Donations from this centennial event were collected for the University of Winnipeg’s project for the retrieval of KGB victim files and for the ongoing humanitarian work of the Mennonite Centre in Molochansk, Ukraine. 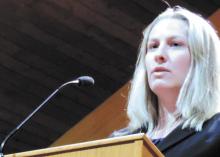 Historian Aileen Friesen speaks to a full house at St. Catharines United Mennonite Church at an event commemorating the centennial of the Russian Revolution. (Photo by Randy Klaassen)