The first signs of promise 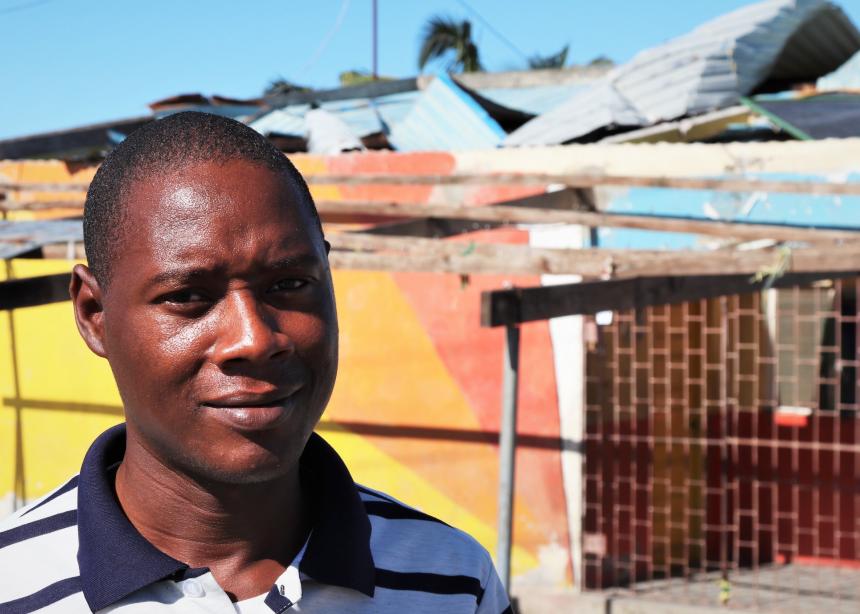 Francesco Zuba, coordinator of the Association for Assistance to Orphan Children, stands in front of the damaged preschool in the Munhava neighbourhood of Beira, Mozambique. (Photo by Paul Shetler Fast)

Two broken chalkboards thrown by the 190-kilometre-per-hour winds of Cyclone Idai bake in the sun on what remains of the crumpled tin roof of one neighbourhood’s only preschool.

In mid-March, Cyclone Idai slammed into central Mozambique near the coastal city of Beira, tearing off roofs, destroying homes and businesses, downing trees, displacing tens of thousands and killing hundreds. As the poorest, most densely populated neighbourhood of the city, located on low-lying land near the port, the neighbourhood of Munhava was particularly vulnerable.

“These neighbourhoods like Munhava were already so vulnerable before the storm,” says Zacarias Zimba, program officer for Mennonite Central Committee (MCC) in Mozambique. “The low quality of the buildings, economic poverty, high rates of HIV and other infectious diseases—anyone could see this was going to be a disaster if it hit these areas.”

Idai hit Beira over a 12-hour period, peaking in intensity in the middle of the night on March 14.

“It was a nightmare when it came,” says Zimba. “It was very loud, very scary for all of us. We had never had something like this. It was the first time even for elders here, who told us that even their fathers and grandfathers had not seen this kind of wind and destruction. The amount of damage caught everyone by surprise. The power of the wind was so bad, concrete blocks and metal flying through the air, everything. It was just a nightmare.”

Once the storm passed, MCC’s relief response to Munhava and other devastated areas of Mozambique began. In this neighbourhood, MCC has a 13-year partnership with the Association for Assistance to Orphan Children, providing preschool education, nutritional support, girls’ empowerment and HIV support programming to some of the community’s most vulnerable people.

Francesco Caelano, the association’s administrator and a local pastor, says, “All the community was looking to us after the cyclone because no one else was doing anything to respond. Families were without hope or income or a way forward. They were in need of assistance just to eat the next day.”

With MCC’s support, the association provided emergency food baskets with two months’ worth of supplies to 450 families in Munhava, representing about 2,250 people. These food baskets contained rice, corn, beans, oil, salt and sugar, offering a foundation of nutrition for these families as they work to rebuild their lives.

“This food, it gave us hope,” says Francesco Zuba, the association’s coordinator. “This help cannot be measured. It gave us a message of comfort and hope at a time when we had none.”

“It was a great help to my family,” says Maria Inacio, who received a food basket and whose child is a student at the preschool. “This cyclone brought so many losses to our family and community. Receiving the food was our first sign of promise.”

Francesco Zuba, coordinator of the Association for Assistance to Orphan Children, stands in front of the damaged preschool in the Munhava neighbourhood of Beira, Mozambique. (Photo by Paul Shetler Fast)