Three-year plan focuses on ‘encountering, embracing, embodying Christ in life, in community, in the world’ 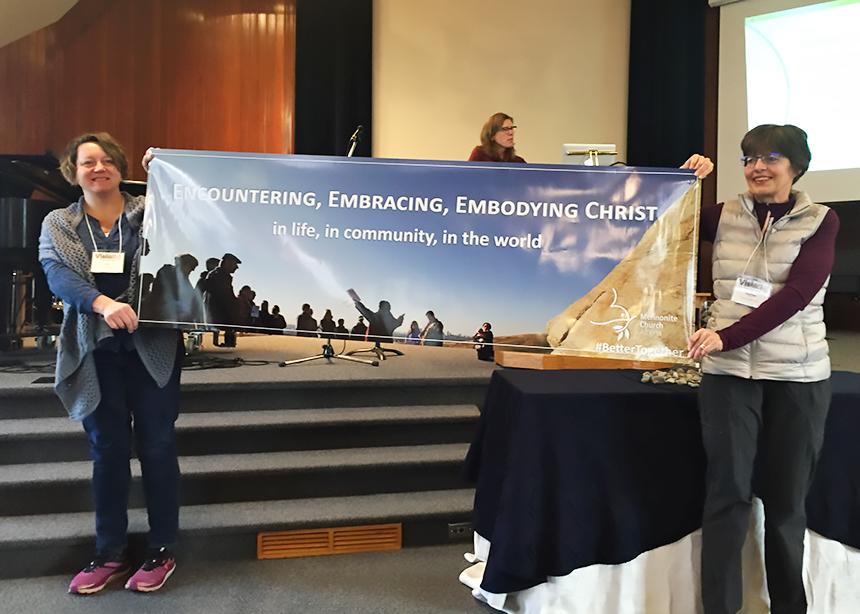 An exciting part of Vision 20/20 was the unveiling of the vision statement on a huge banner that will be available to be hung in every MC Alberta congregation. Holding up the banner are June Miller, MC Alberta’s communications coordinator, left, and Heather Klassen of Foothills Mennonite Church. Facilitator Betty Pries is in the background. (Photo by Joanne De Jong)

Like all Mennonite Church Canada regional churches, MC Alberta continues to pray and discern God’s call, moving forward after the nationwide restructuring a couple years ago.

Representatives from across the province met at First Mennonite Church in Calgary on Nov. 1 and 2 to hear the final results of the four-phase discernment process called Vision 20/20.

Attendees didn’t know what to expect, so there was a sense of anticipation as MC Alberta unveiled a huge banner with the new vision statement: “Encountering, embracing, embodying Christ, in life, in community, in the world.” This banner will be made available to all regional church congregations to hang on their walls, as they walk forward into a new three-year plan.

The idea put forward was that congregations will focus on encountering, embracing and embodying Christ in life during year one, in community during year two, and in the world during year three.

Participants were given sheets with lists of more than 30 practical suggestions on how to encourage congregations to live out the vision in year one. Each church represented at the event was encouraged to spend time together discussing how to implement the vision as individuals, church committees, congregations and at the regional church level. Suggestions included asking a person to be a spiritual friend, planning a monthly alternative worship service to help the congregation meet God in a new way, and beginning committee meetings with one-minute personal sharing by each person, followed by prayer.

Although conversations were lively, there was some concern that there might be resistance. One participant wondered if taking too much time to share and pray together at a committee meeting may reduce efficiency.

Churches were eager to get going, but the official launch won’t be until the annual MC Alberta meeting next March. Congregations were encouraged to initiate a “soft launch” through sharing the revealed vision and beginning to talk about what they would like to do.

The year-one focus will be on churches discovering ways to reclaim prayer and spiritual disciplines, remembering that they are beloved. During the leaders forum on Nov. 1, Lois Epp of Trinity Mennonite Church in DeWinton said, “If we haven’t experienced God, how can we help others find him?” This was one of the main themes of the weekend: the importance of encountering the mystery and love of Christ in people’s personal lives.

Another central theme was the importance and blessing of being the body of Christ. At the leaders forum, people were asked to share why they thought church matters. Answers included the need to share stories, to be accountable and to hear others testify that God is real.

Later that day, participants were each given a stone to emphasize that together they are a body made up of living stones.

During her sermon on communion, Pries shared her concern that the church has lost the “heft” of communion and the sense of the mystery of the table where Christ invites us to “Take. Eat. This is my body, broken for you. Take. Drink.” All came forward to receive the bread and the cup while singing the song, “We Become What We Receive.”

Laura Wiebe of Trinity Mennonite shared how, as she approached the communion table, she saw Christ with hands outstretched and she experienced a feeling of being beloved. When she reached the bread and the cup, she said she saw her hand in Christ’s as she stood next to him. As the song continued to play, she said she had a sense of having received love and belonging, and now she was able to give that to others.

The conference ended with each person turning to a neighbour and saying, “I’m glad to do church with you.”

Then each person picked up a stone to take home as a reminder that they are part of a special community of living stones. When Tim Wiebe-Neufeld, MC Alberta’s executive minister, got home from the event, he placed his stone in a fish bowl so he wouldn’t forget.

This article appears in the Nov. 25, 2019 print issue, with the headline "#BetterTogether."

Related stories:
'Where there is no vision...'
MC Alberta embraces new life, hope and possibilities 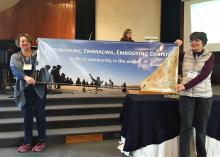 An exciting part of Vision 20/20 was the unveiling of the vision statement on a huge banner that will be available to be hung in every MC Alberta congregation. Holding up the banner are June Miller, MC Alberta’s communications coordinator, left, and Heather Klassen of Foothills Mennonite Church. Facilitator Betty Pries is in the background. (Photo by Joanne De Jong)