The end in mind 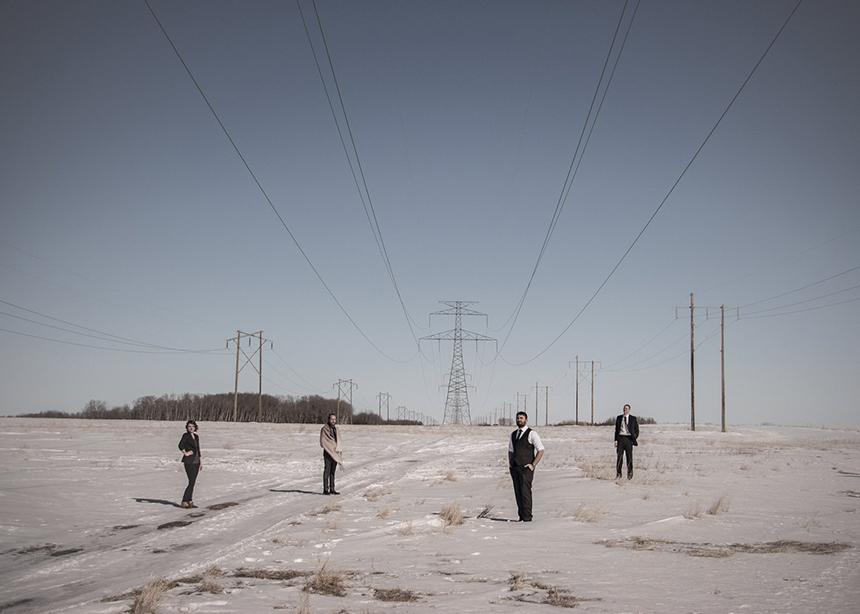 Etch Your Own Stone is the follow-up to Sparky and the Plugs’ 2016 eponymous debut album. (Photo by Judith Schulz)

How will people remember you when you die?

That’s the question at the heart of “Stone Cutter,” one of the key tracks on Etch Your Own Stone, the new album from Saskatoon bluegrass quartet Sparky and the Plugs.

In the song, written by banjo player Curtis Wiens, the singer contemplates how he will spend his time on Earth.

“In the end, in the end you can’t etch your own stone,” guitarist Zac Schellenberg sings. “You won’t scratch out the words to forever be known by / But you can take the chance before you’re called home / To ask yourself, what will they write on your stone?”

The band used a line from “Stone Cutter” for the album’s title because the song reflects the subject matter of the album’s other 12 tracks.

“Our joke recently is that the album is all about dying,” Schellenberg says. “[But] it’s mostly about living. . . . Just the fact that you’re the only one who can say how you’re going to live your life.”

“It’s a very universal and applicable life lesson, and it’s a big theme in the album,” adds Clay Buhler, who plays bass.

The group, which is rounded out by mandolinist Jill Wiens, recorded Etch Your Own Stone over the course of three sessions at Saskatoon’s Seashell Sound Productions with recording engineer Darrell Bueckert.

Etch Your Own Stone is the follow-up to the quartet’s 2016 self-titled debut. Like that album, the group’s four-part harmonies and instrumental skills are on full display.

This time around, however, the group incorporates elements of blues and rock into its sound, adding the talents of Bueckert on drums and Emily Hooge on violin.

“Incorporating other musicians really brought the sound to a different level,” Buhler says. “It rounded things out in a way we were hoping for, and it exceeded our expectations, I think.”

Lyrically, the album covers a variety of different topics. Faith is one of them, which makes sense, given that the band’s members—all of whom are in their mid-20s—grew up in Mennonite Church Canada congregations.

“Upon This Rock,” for example, is a gospel song Curtis wrote from the perspective of the Apostle Peter.

“Deep Roots,” meanwhile, is an acapella song that Schellenberg wrote based on the memoirs of his step-grandfather, Jacob Thiessen, who lived through the Russian Revolution and Russian Civil War. “He struggled with keeping to his pacifist Mennonite roots and trying to figure out what was right,” Schellenberg says. “Was it better to fight and stand up for the people around you? Or turn the other cheek? [The song is] a semi-historical, semi-fictional take on his early life.”

The band members aren’t quite sure what comes next now that Etch Your Own Stone is available to the public. The music they make together is a product of their deep friendship with one another, and something they do on the side when they aren’t working their day jobs. They are proud of the album, though, and they are looking forward to making more music together.

“We want to give a big thanks to all the people who listen to us,” Buhler says. “Here’s to another five years.” 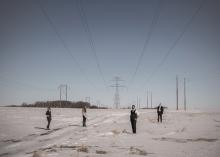 Etch Your Own Stone is the follow-up to Sparky and the Plugs’ 2016 eponymous debut album. (Photo by Judith Schulz) 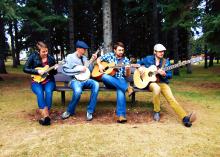 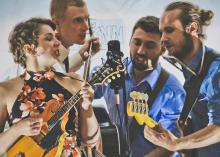 The members of Sparky and the Plugs grew up in Mennonite Church Canada congregations. They have been friends since they were teenagers. (Photo by Judith Schulz) 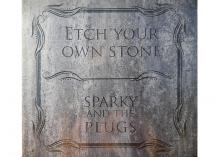 Etch Your Own Stone takes its name from the song ‘Stone Cutter,’ in which the singer asks: ‘How will people remember you when you die?’ (Photo courtesy of Sparky and the Plugs)