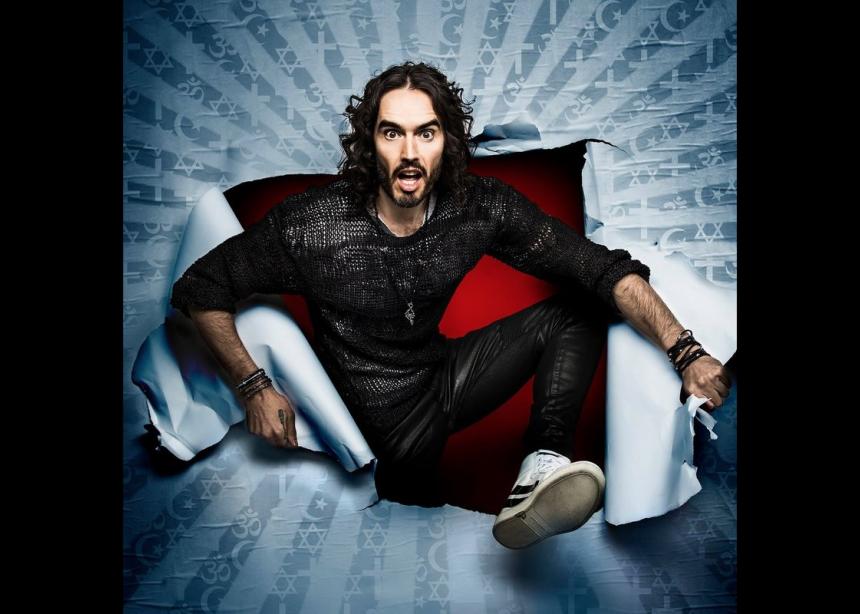 'People who are sceptical of organized religion are actively seeking out insights on Jesus and spirituality from people who aren’t overtly affiliated with the church. People like Deepak Chopra, Oprah Winfrey, Russell Brand (pictured) . . . to name a few.' (Photo courtesy of Facebook.com/RussellBrand)

“People are no longer interested in religion or church, but they are still interested in Jesus.” This is a statement many Christians, including myself on occasion, proclaim confidently.

A more accurate statement is that a growing number of North Americans are no longer interested in religion or church, but some of them are still interested in Jesus. Even then, I would qualify this statement as conditionally true. By that I mean their interest in Jesus depends on certain conditions, most notably, who is speaking.

People who are sceptical of church and organized religion aren’t interested in hearing about Jesus from the very institutions they are wary of. However, many of them are actively seeking out books, podcasts, lectures and insights on Jesus and spirituality from people who aren’t overtly affiliated with the church. People like Brené Brown, Deepak Chopra, Oprah Winfrey, Adyashanti, the late Rachel Held Evans, Russell Brand . . . to name a few.

We’ve lost our credibility. That’s why. We’re no longer trustworthy.

Too often our “Jesus” comes packaged with a moral, social, economic or political agenda that is problematic at best. The truth is, the name “Jesus” coming from the mouth of someone who identifies as a church-going Christian is more likely to trigger, offend or repulse these spiritual seekers than intrigue them. Someone recently told me that one of the biggest pet peeves of many Nones (have no religion), Dones (done with religion), and spiritual-but-not-religious people is when Christians try to tell them who Jesus is.

Does this mean we Christians should never talk about Jesus or share our faith with others?

Of course not. But we should probably take some time to prayerfully and objectively reflect on the situation we find ourselves in. Why don’t people want to hear about Jesus from us? Why have we lost our credibility as a positive and trustworthy spiritual voice in North America?

I obviously don’t have the answers. but I have a few thoughts.

First, I think our credibility will increase as we become known for what Jesus intended us to be known for: our love.

Our love for God, one another and our neighbours, which includes strangers, foreigners and enemies. This means spending time as church communities discerning what it means to truly love people and creation in these confusing times. But it also means not allowing the complexity of our 21st century to become an excuse for making love more complicated than it is.

In the parable of the Good Samaritan, Jesus clarified what it meant to love our neighbour. To love others is to treat them the way you would want to be treated—if you were in their situation.

That last part is important. You can’t understand how to love someone until you put yourself in their shoes. Telling people to “pull themselves up by their bootstraps,” for example, may be received as “tough love” by those who are as mentally, physically, emotionally and socio-economically “fit” as you are, but it may be harmful—or even abusive—to someone who doesn’t possess the power and privilege you (often unknowingly) enjoy.

Second, I believe our credibility will increase as we sensitively but courageously speak up and confront that which is done in the name of Jesus yet contradicts the love of Christ.

However, it is imperative that our challenges, protests, activism and prophetic messages flow from a place of Spirit connection and not from ego. If we’re not speaking and acting in harmony with God’s love and grace, we are part of the disease, not the cure. Every morning it’s a good idea to remember to tend to the log in our own eye before pointing out the speck in everyone else’s.

Someone recently told me that the problem with my “politically correct, progressive Christian, social-justice movement” is that we have too many prophets and not enough priests. We have lots of prophets pointing out what everyone is doing wrong, but we lack priests who extend forgiveness and absolution for our transgressions. I think he has a point. The call of Christ is to integrate grace and truth, justice and mercy. This isn’t easy, but it is essential.

Third, we need to honestly examine our desire to regain credibility to speak about Jesus, and in Jesus’ name, in the public domain.

Are we motivated by a sincere desire to bear witness to the liberating and transformative presence and message of Christ, or is it power and control we’re really after?

'People who are sceptical of organized religion are actively seeking out insights on Jesus and spirituality from people who aren’t overtly affiliated with the church. People like Deepak Chopra, Oprah Winfrey, Russell Brand (pictured) . . . to name a few.' (Photo courtesy of Facebook.com/RussellBrand)