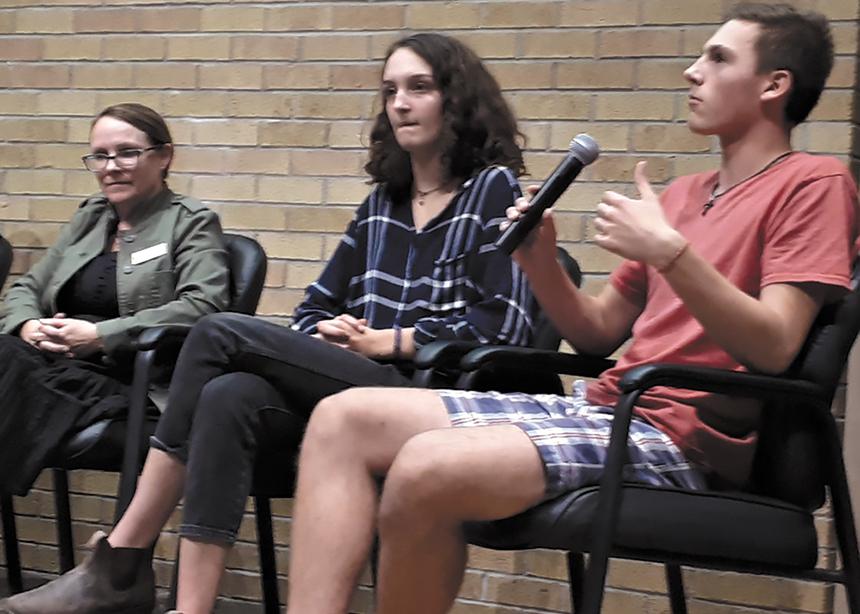 Sara Wahl, Rebecca Hiller-Ranny and Micah Neufeld take part in a panel discussion on ‘Let’s talk about sex, power and spirituality’ during the evening session for parents and pastors during Rockway Mennonite Collegiate’s Spiritual Emphasis Week, held from Sept 24 to 26. (Photo by Janet Bauman)

Rebecca Hiller-Ranny, a Grade 12 student, affirmed the blunt tone taken to address sex, power and spirituality at her school. “It was so important,” she said. “It was so impactful.”

And Micah Neufeld, in Grade 11, said he was glad for the open communication, noting how it sparked good conversations with his parents.

“Let’s talk about power, sex and spirituality” was the topic for Spiritual Emphasis Week at Rockway Mennonite Collegiate in Kitchener from Sept. 24 to 26. The annual event tackles a current and timely issue confronting teenagers from a biblical, faith-based perspective.

Over three days, guest speaker Carol Penner, an experienced pastor and assistant professor at Conrad Grebel University College in Waterloo, used a straightforward, matter-of-fact style, interspersed with stories and anecdotes, to engage students from grades 7 to 12.

She began by exploring the biblical story of Joseph in the Book of Genesis from the perspective of power and abuse. She helped students see how power was misused to hurt Joseph on several occasions, including by people who should have loved and cared for him.

She addressed the relationship between sex and power, stressing the importance of seeking consent before engaging in touch, even having students practise saying out loud, “Can I kiss you?”

Penner described spirituality as “who we are on the inside,” which gets expressed as “who we are on the outside,” based on people’s values and actions. She challenged students to make healthy choices in line with values that seek to take care of themselves and others. She repeatedly asked students, “Do you want to be someone that helps people, or someone that hurts people?”

She addressed the use of social media, noting that, while it is a great tool for connecting, people can get addicted to the positive feedback of “likes” and “loves” but deeply hurt by being overlooked or bullied. She encouraged students to ask questions like, “Is this making me feel better about myself?” “Is this helping me build friendships?” or “Is this helping or hurting others?

In the case of pornography, she described how normal curiosity about sex can become distorted by unrealistic, often violent and degrading images, particularly of women, affecting teens’ expectations and understandings about sex, and how they see their own bodies and the bodies of others. She said that using pornography means supporting an industry that hurts people.

She also took time to describe the reaction of human brains and bodies to trauma, and assured students that they can heal if they have experienced abuse. She emphasized that talking to someone about what happened can be the first step towards healing.

Theatre of the Beat, a touring company that creates original social-justice theatre, led interactive workshops called “Safe hands.” Artistic director Johnny Wideman and others helped students learn about consent, power and sexual assault, and to practise saying “no.” They also unpacked a difficult story of abuse from the Bible, noting the presence of shame and misogyny, and explored alternative scenarios and endings.

Senior students also participated in a workshop facilitated by the local sexual assault support centre, to help them understand the spectrum and seriousness of inappropriate sexual behaviour.

Supported by Mennonite Church Eastern Canada, Rockway hosted an evening session for parents and pastors. Penner provided an overview of her presentations and then facilitated discussion with a five-member panel, that included Wideman, as well as Pastor Jonathan Brubacher, teacher Sara Wahl and students Hiller-Ranney and Neufeld. The discussion was wide-ranging and thoughtful.

Drawing parallels to the process of getting a driver’s license, Wahl encouraged parents to have children take a readiness course, such as “My life online,” before getting a smartphone.

Wideman noted how the need to belong is so strong, that many seek affirmation and attention from outside of themselves, instead of learning how to love themselves.

Brubacher emphasized how important it is for churches to offer positive messages about “our belovedness as God’s children.”

Penner stressed that if parents and churches don’t address these topics, children will learn about them from popular culture, which is not realistic or accurate.

Reflecting on Penner’s input, Hiller-Ranny said, “She spoke a truth,” noting that fellow students, especially girls, were “feeling it strongly . . . it was validating for so many people” to have their experiences named as sexual harassment or abuse. People will need opportunities to debrief,  but “it was important,” she added.

Neufeld said he was struck by how many people, especially women, are affected by sexual harassment and assault. One take-away for him is that “everyone is coming from somewhere,” and you don’t know their story, so it is important to “approach people from a place of love, not judgment.” 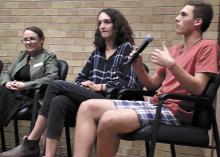 Sara Wahl, Rebecca Hiller-Ranny and Micah Neufeld take part in a panel discussion on ‘Let’s talk about sex, power and spirituality’ during the evening session for parents and pastors during Rockway Mennonite Collegiate’s Spiritual Emphasis Week, held from Sept 24 to 26. (Photo by Janet Bauman)