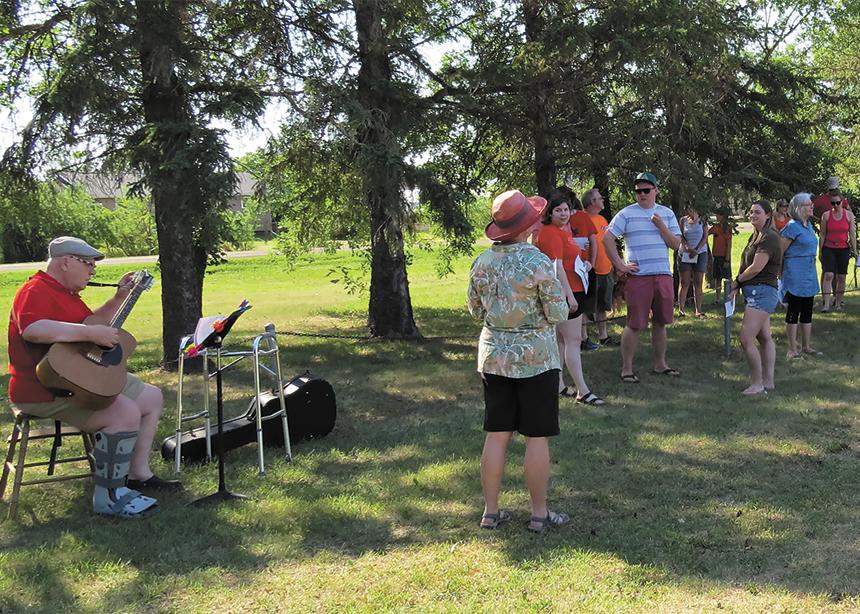 Osler Mennonite Church gathers in the local cemetery on Canada Day for a memorial service in honour of children who died at Indian Residential Schools. (Photo by Susan Braun)

Osler Mennonite Church congregants gathered on Canada Day, July 1, in the local cemetery next door, to sing some hymns, share their sorrow and pray together. But it wasn’t one of their own they were grieving. The congregation met instead to grieve in solidarity with its Indigenous neighbours on the finding of unmarked graves at Indian Residential School sites.

Katherine Penner, a student at Canadian Mennonite University in the area of peace and conflict transformation, came up with the idea for the service, in conversation with her family. Pastor Patty Friesen responded enthusiastically, and the two women planned the simple ceremony.

“When we welcomed everyone, we acknowledged that we had the privilege to be able to honour those who have gone before,” said Penner. “We have marked and cared for their graves.” She told them that this was something Indigenous people were denied when their children died while attending residential schools in Saskatchewan and beyond.

One of the congregants attending the memorial service was Tree Bird, a Cree music educator and single mother of four boys. When Penner invited participants to share their thoughts and feelings, Bird spoke out.

“When I first walked up and saw the headstones,” Bird told the congregants, “I had to turn my face away and let some of the tears go.” She explained to them that, in Indigenous culture, if one cries at a funeral, the tears act as a barrier, preventing the spirit of the departed from leaving.

“I myself am a survivor,” Bird said. “My mother and my grandparents on both sides are survivors of the Indian Residential School system.”

Penner appreciated Bird’s presence as well as her sharing. She said the service had a greater impact for the congregation because Bird was able to speak from her own experience as an Indigenous person.

For her part, Bird said she felt “extreme gratefulness and thankfulness that the people of Osler Mennonite are that in tune and in touch with their faith and with how Mennonites are taught to live reconciliation and peace.”

Friesen and Penner both admit to feeling hesitant about holding the service, but for different reasons. Friesen worried about possible pushback from the community, while Penner was concerned that their actions might do more harm than good. However, both women’s worries proved unfounded.

People who attended were mostly from Osler Mennonite, but, said Friesen, “those [who attended] from the town wished we had advertised more broadly. . . . It’s nice to know others would have liked to participate.”

Penner likewise heard affirmation from participants. “So many people from church have thanked me,” she said, “which affirmed to me that it was a useful act.”

Penner isn’t sure what the congregation’s next steps will be but said, “We want our faith to serve others and not cause more injustice.” She said the church needs to acknowledge the harm it has done, but it also needs to work toward justice: “I wanted [the memorial service] to be a starting point, not an end point. Having taken that step, we will be more confident to take the next step.”

See the related story, “An Indigenous woman’s journey and advice to Mennonites.” 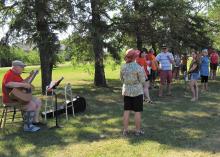 Osler Mennonite Church gathers in the local cemetery on Canada Day for a memorial service in honour of children who died at Indian Residential Schools. (Photo by Susan Braun)