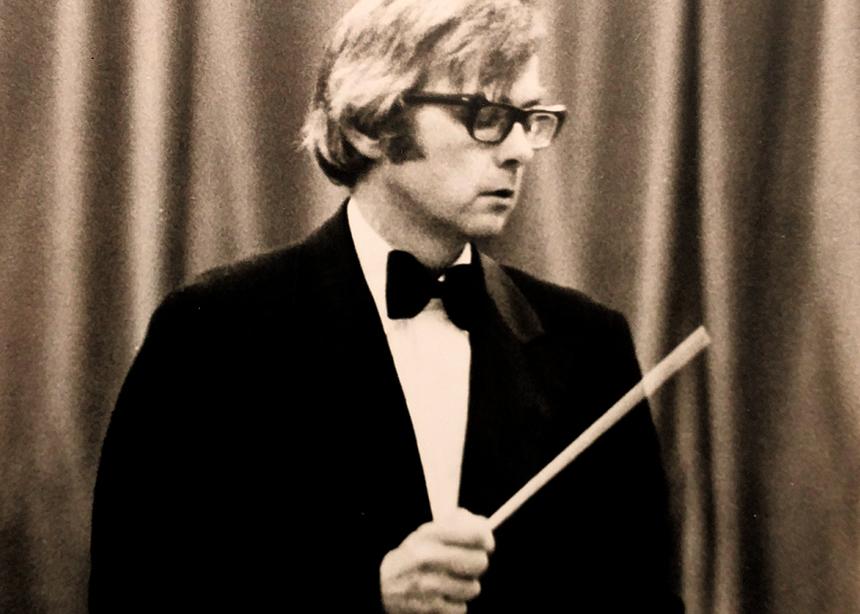 Abner Martin was born at his parents’ farm in Waterloo Township, Ont., the seventh surviving child of Annanias and Susannah (Steckle) Martin. His family, until the time of Abner’s birth, were members of the Old Order Mennonites that met at Martin’s Meeting House. Later, they attended St. Jacobs Mennonite Church, and Abner had opportunities to develop music leadership skills as a song leader and a junior choir director when he was 15. But his first foray into conducting was actually at Martin’s Schoolhouse, where, in Grade 2, he lobbied hard to be given the baton to lead the school rhythm band.

Annanias and Susannah sent their three youngest children to Rockway Mennonite High School in Kitchener, where Abner participated in the male quartet, mixed octet and choirs. Of course, the most important accomplishment of his Rockway years was meeting and falling in love with Shirley Jantzi.

After Rockway, he headed to Goshen College in Indiana. It made news back home in Waterloo County when he was selected, in his freshman year, as the baritone soloist with the Elkhart Symphony’s performance of Brahms’s “Requiem.” After two years at Goshen, love called him home, and he and Shirley were married in July 1955.

That same year, he had an idea to start a choir that would sing sacred music not “usually covered” in the Ontario Mennonite churches. Shirley suggested they could be called Menno Singers. He led the choir while completing degrees at the University of Toronto. By the time he was 24, he had two children, a high school teaching job and had purchased a house in Tillsonburg, Ont. A few years later, it was back to Waterloo to teach at Waterloo Collegiate, and then to the home farm.

My father and I farmed together for about 40 years; we started when I was 7. We would buy beef calves from the West and feed them over the autumn and winter months in the old dairy barn and sell them in the spring. During those summers, Abner studied for a master’s degree at the Eastman School of Music in Rochester, N.Y.

One of his professors at Eastman, George Proctor, who had become head of music at Mount Allison University in Sackville, N.B., invited Abner to apply for a position there. He interviewed, accepted the job offer, and bought a house, sight unseen by Mom, and moved his family east.

During our Maritime sojourn, we can also see another example of Abner’s boundless courage; in the summer of 1972, Dad was studying with some eminent conductors in Europe and took our entire family with him for three months. We travelled with an early version of TourMagination and learned about our Anabaptist roots.

In 1973, Abner decided that if he was ever to realize his childhood dream of raising Holstein cows, it was time to make another move, this time to a beautiful farm near Atwood, Ont. It helped that he had a captive workforce of teenagers.

During the next 23 years, he took great satisfaction from working the land and raising dairy cows. Dad took delight in coaching his grandkids to show their 4H calves and supporting another generation of musical talent.

The early years on the farm were also the Mennonite Mass Choir years. Dad had come back from the East Coast with a great vision for spreading good choral practice throughout the community. After the concerts, we would make our way home, and Dad would head out to the barn in his formal conducting wear to make a last check on the cows.

Due to his health problems, he gave up leadership of Menno Singers and the Mass Choir in 1979. His professional musical accomplishments were done at age 44. In 2017, he was inducted into the Waterloo Region Hall of Fame.

Finally, a few words about Abner’s Christian faith. Over the years, he held membership in Mennonite churches at St. Jacobs, Listowel and Waterloo North. He valued the community he experienced in each place.

He served the wider Mennonite church as a member of the Binational Commission on Christian Education in the 1960s and trained up a good many congregational song leaders. He also taught Sunday school lessons.

In his personal faith, though, he could be inscrutable and oblique. In family discussions he might say, “I’m not telling you what you have to believe,” and, when pressed, he might give examples of how the church’s understanding of a faith concept had changed and evolved. And finally, when there was no way out, he could say, “I’ll keep with those who search for truth and be careful of those who have found it.”

Read a reflection by Abner Martin, delivered at the 60th anniversary of Menno Singers: ‘An ample opportunity to try something new.’ 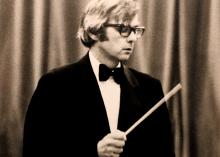