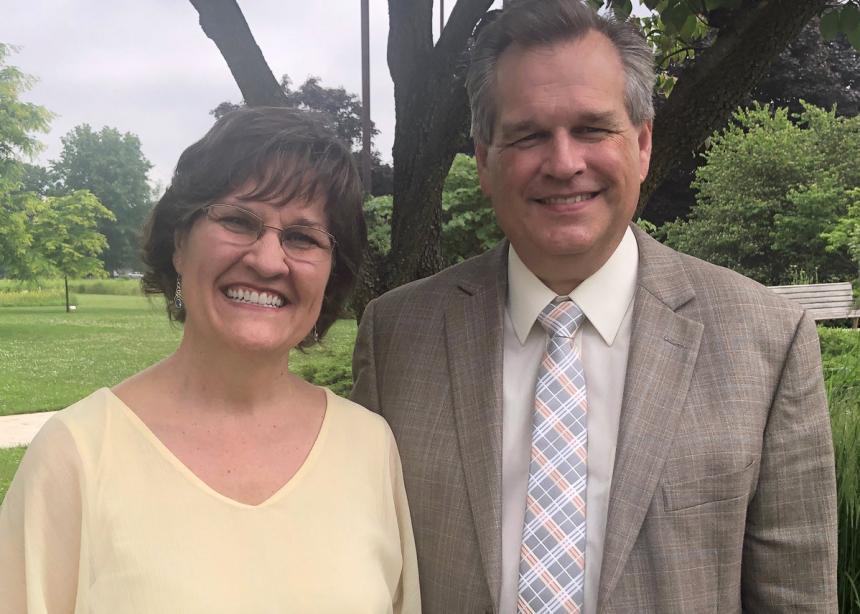 David W. Boshart, Ph.D., of Wellman, Iowa, has been appointed the next president of Anabaptist Mennonite Biblical Seminary (AMBS), Elkhart, Ind., effective Jan. 1, 2020, following a period of “extended discernment” that included “outreach to and listening sessions with the AMBS community,” according to board chair Bruce Baergen of Edmonton.

Boshart has a doctorate in leadership studies with an emphasis in missional theology from the School of Education at Andrews University in Berrien Springs, Mich. He also earned degrees from Eastern Mennonite Seminary and Eastern Mennonite College (now University), both in Harrisonburg, Va.

Boshart also will bring to his new role his experiences of serving in volunteer leadership roles across the Mennonite church; in July, he completed a two-year term as moderator of MC U.S.A. (2017-19), having served on the denomination’s Executive Board since 2007 and on the Board’s executive committee since 2008. He was a member of the AMBS board of directors (1999-2007), serving as chair (2003-05).

Beverly Lapp, the current vice-president and academic dean, will continue to serve as acting president until the end of this year.

Boshart’s traditional theological leanings and credentials have been called into question by at least four women on social media and the Into Account website since the announcement, citing his views on dealing with sexual abuse survivors, same-sex marriage and other LGBTQ+ issues as reasons for opposing his appointment.

They also lament that they feel their concerns were not sufficiently taken into account by AMBS during the hiring process that included the use of an outside consulting firm.

On Sept. 20, AMBS posted a statement from Baergen responding to the “extended discernment” process: bit.ly/ambs-sept-20-response. 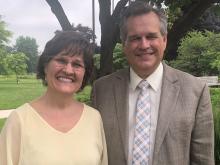 I am a woman from a Mennonite family where women were not heard. I find it reprehensible that modern Mennonites STILL refuse to listen to women. This enables the sexual abuse that is in the news so much. You should be ashamed of yourselves for this appointment. Have you not learned from the previous scandals?

Thanks to the Canadian Mennonite for covering the opposition to the AMBS announcement about their new president. As the only news source which mentioned this, you showed yourself to be interested in more than just corporate communications.

The one piece that could be more accurate is that significant concerns about Boshart's candidacy were raised by the four women you mention here, and many others, since long before the announcement. As a man, I'll repeat my criticism of the announcement here, in the interest of furthering the news of this announcement.

In 2017 I edited a special issue of the Conrad Grebel Review. In the afterword to that work, I wrote about the need for institutional transparency and used the example of Sara Wenger Shenk's leadership as a potentially good way forward for Anabaptist Mennonite Biblical Seminary, and Mennonite education. As Stephanie Krehbiel documents in the piece linked above at Into Account, AMBS seems to be sacrificing significant pieces of its recent progress.

What is particularly frustrating to me about AMBS's opaque announcement, beyond the narrative erasure Krehbiel discusses, is the lack of any positive reason for why David Boshart will be a good president—other than that he has held leadership in a denomination that has halved in size over the last 10 years and that he loves the seminary. Because of some conversations that I've had with people at the seminary, I know that people there believe he brings potential to address other issues the seminary is now facing. But failing an arictulation of those, we are left with simple institutional secrecy, the kind of speech that destroys lives and poisons culture.

This commentary on Mr. Boshart's appointment is dissapointing.

Leadership in the Mennonite Church is daunting in these days. It takes selfless courage to subject self and family to this kind of armchair scrutiny.

Can we allow Mr. Boshart to assume his duties and make his own decisions before we pile on with terms "heteropatriarchal"? What does that mean anyway? Mr. Boshart has been vetted by an elected board. After consideration, they have asked him to step forward. He has yet to take his seat at the table.

And before taking a seat Mr. Boshart is plagued with microaggressions and an attempt at de-platforming. What folly.

Is there no grace extended anymore when people begin their challenging duties?