Sara Wenger Shenk retired from her role as president of Anabaptist Mennonite Biblical Seminary (AMBS), Elkhart, Ind., on June 30, after nine years in the role. Since beginning in the fall of 2010, she provided strong direction for the seminary’s future, overseeing changes such as transitioning the institution’s name from “Associated” to “Anabaptist” in 2012, renovating the Chapel of the Sermon on the Mount in 2011-12, and degree program revisions that included the creation of a distance-friendly master of divinity program in 2013. She also led efforts to increase the seminary’s global reach through Global Anabaptist Education initiatives, including connecting with Meserete Kristos College in Ethiopia. As existing faculty members retired, nine new teaching faculty members and a new vice-president and academic dean have been hired during Wenger Shenk’s tenure. She initiated strategic focus conversations among the faculty that led to further integration of environmental, immigration and peace issues into the curriculum. Bruce Baergen, AMBS’s board chair from Edmonton, has observed how Wenger Shenk’s leadership has empowered others. “Sara’s ability to encourage collaboration and enable people to lead and be the best they can be—combined with her willingness to give strong direction when required—has empowered AMBS to grow and thrive,” he said. Prior to coming to AMBS, Wenger Shenk served in a variety of roles at Eastern Mennonite University and Seminary, Harrisonburg, Va., including as seminary associate dean and associate professor, and interim seminary dean. She has written and contributed to several books, including Meditations for New Parents (Herald, 1996 and 2014). She continued writing regularly while serving as AMBS president in “Practicing reconciliation,” a blog she launched in February 2013 that has consistently been one of the most visited pages on the AMBS website. 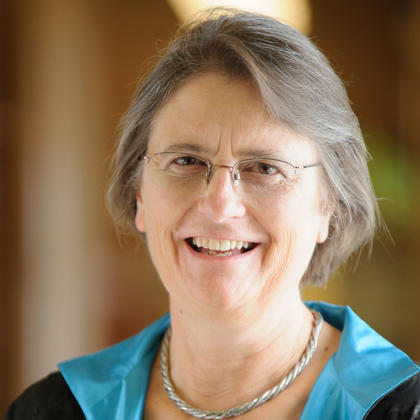