Baptism in a barrel 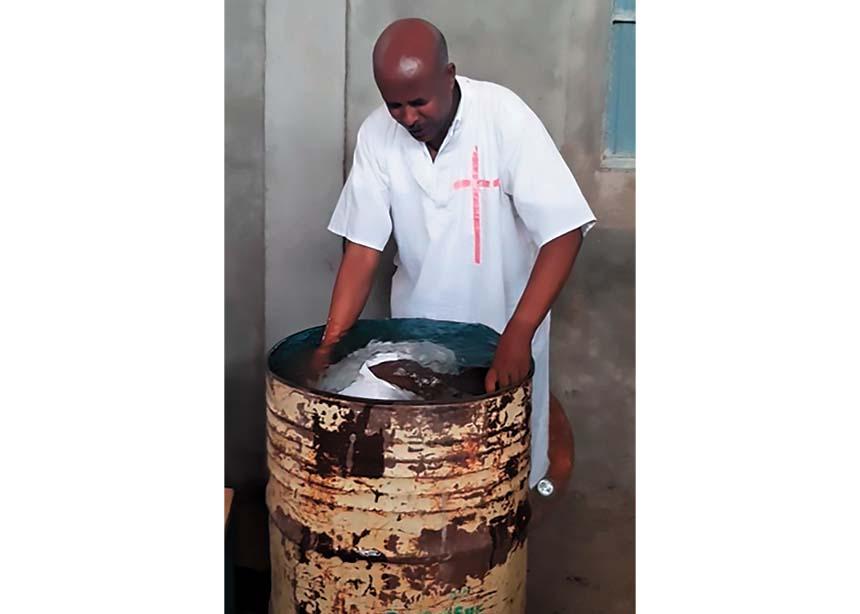 Pastor Desalegn Abebe, president of Meserete Kristos Church, baptizes a new believer in a barrel during a ceasefire in the Ethiopian civil strife. (Photo courtesy of Mennonite World Conference)

It is very difficult to go to the northern part of Ethiopia after the war broke out. Despite the security concerns, when I heard that members of our church in western Tigray were in difficult conditions, I organized a team. We would go there to show our love for Meserete Kristos Church (MKC) members in the area.

The situation is dire. Pre-war infrastructure, housing and commercial activity are no longer there. It’s empty.

We were able to visit the towns where MKC local churches still exist. At a place called Abduraf, there was a new convert who received training in basic Christian doctrines and was ready for water baptism. Unfortunately, before he was baptized, the war broke out. Church leaders were scattered; the new believer could not get water baptism.

When we visited the area, this new believer came and asked me to baptize him. When I inquired about his testimony, the local believers told me that he had learned the truth but had not yet been baptized.

We often baptize people in a river or in a big bathtub. Neither was available in the area. I told him that baptism was not possible there.

The new believer thought a little and told me that I could baptize him in a barrel.

But there was scarcity of water in the area. Undeterred, he and other believers purchased jerkins of water and filled the barrel with water.

Then I began to wonder how this man could get into a barrel. He replied, “I have military training, I can.”

Everyone thanked God. We forgot that we were in an insecure zone. We all felt God’s presence.

What was happening seemed to be like watching a drama, not a reality. It was a unique incident to witness.

After he was baptized, the believers received him by singing. They gave him hugs one by one and said, “Congratulations.”

Our brother rejoiced that he was baptized. “In an impossible situation, God opened the way for me to be baptized,” he said. “This day is historic for me. God sent the president of our church to baptize me.”

God is everywhere regardless of the situations and is doing God’s business when we are willing to go into the world and share the good news to people. 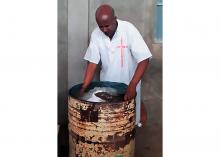 Pastor Desalegn Abebe, president of Meserete Kristos Church, baptizes a new believer in a barrel during a ceasefire in the Ethiopian civil strife. (Photo courtesy of Mennonite World Conference)