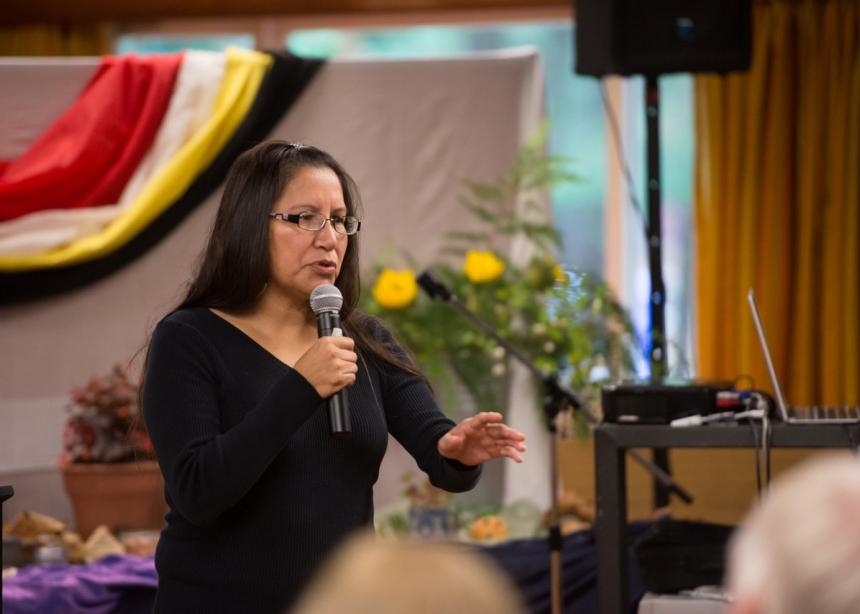 One of the co-founders of the grassroots Indigenous-led movement Idle No More says her trust in the Mennonite church has been shaken by Mennonite Church Canada’s recent decision to reduce its Indigenous-Settler Relations (ISR) position from full-time to half-time.

Sylvia McAdam (Saysewahum) is a law professor at the University of Windsor who is from the nēhīyaw Nation. She says that although she has developed a close connection with Steve Heinrichs, who held the MC Canada ISR position prior to the recent changes, her concern about the staffing reduction is not personal.

“It’s not so much Steve. He’s strong enough; he will endure and create sacredness wherever he goes,” McAdam says. “It’s the fact that they took that position and changed it into half-time. I would love to see that position being tripled or [increased] 10-fold.”

The stated rationale for the reduction—budget limitations and transitioning the ISR program to the five regional churches that make up MC Canada—amounts to “passing the buck,” she adds. “If people truly had commitment to decolonization, they would find the money. We’re underfunded at every level but we still find ways to protect the land and waters.”

She says MC Canada’s decision, which comes out of Joint Council meetings held in April, leaves her feeling “disappointed,” “sad” and “betrayed.”

McAdam is not a Christian and has deep concern about the way ongoing church mission work continues “shattering Indigenous cultures.” At the same time, she sees a need for church involvement with—and commitment to—Indigenous peoples.

She did not always feel this way. One thing that changed her perception of the church was participation in a Community Peacemaker Teams delegation to Colombia three years ago. It was a transformative experience for McAdam, and Heinrichs was the one who encouraged her to go.

There was a time when McAdam wouldn’t have listened to Heinrichs. She was suspicious of Heinrichs when she first encountered him, but he kept showing up at Idle No More rallies and speaking at events. Slowly, over a period of years, McAdam warmed up to him.

“He created a level of trust . . . . He created a bridge that I have not been able to [build] with any other church,” she says. “He witnessed firsthand the incredible violence Indigenous people face by standing with us on the front lines. . . . He stood with us. . . . He stood in prayer.”

McAdam is referring in part to Heinrichs’ 2018 arrest in Burnaby, B.C., alongside Tsleil-Waututh land defenders who were resisting the expansion of Kinder Morgan’s Trans Mountain pipeline, as well as time he’s spent at a Wet’suwet’en camp established to resist the Coastal GasLink pipeline in northern B.C.

“His work as an individual and as a representative of the Mennonite church has resounded gently and powerfully across these lands,” McAdam says. “Steve will always be my brother.”

For McAdam, using the language of “freedom, liberation and self-determination” is more useful than reconciliation. Despite having many issues with the church, she says that Indigenous peoples need Christians to be their allies.

“We need them to support the liberation of Indigenous peoples,” she says.

I am greatly saddened by the decision to reduce Steve Heinrich's position to half time. If we are serious about walking alongside people that we have so badly wronged and wounded, and mourn our role as a church body in this, then surely we should be doing more, not less, to build and sustain supportive relationships with Indigenous peoples. After all, it takes time to develop trust, and Steve managed to do that, as Sylvia McAdam cofounder of Idle no More testified. We need to reinstate him into his full time role as quickly as possible.