‘It’s only by God’s grace that I can do this,’ he often said of his work 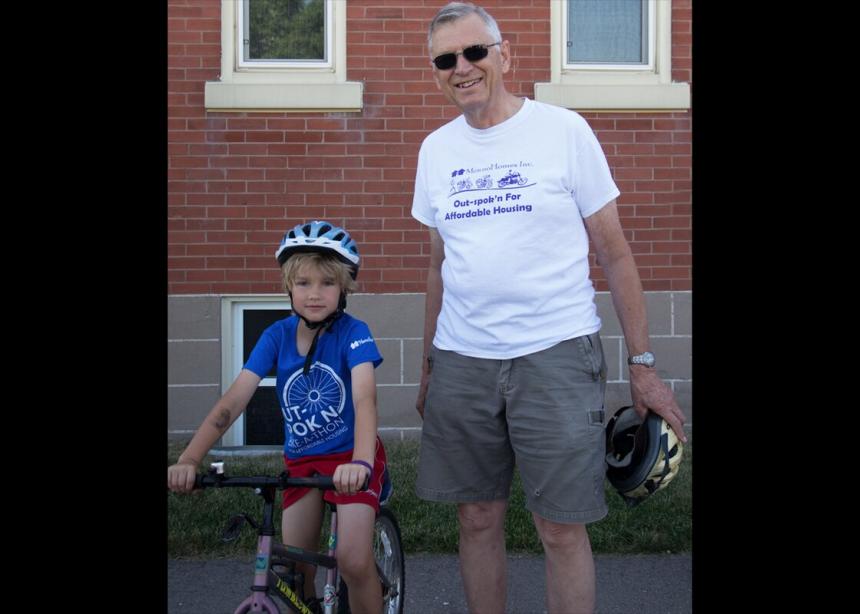 John Cornies with his grandson Henry at the Out-Spok’n Bike-A-Thon, MennoHomes Ride for Refuge in support of affordable housing. (Photo courtesy of the Cornies family)

“Leadership can be rewarding as well as lonely,” wrote the late John Cornies in his memoir. “I have, however, felt God's leading and calling in these endeavours. While I felt that God called and equipped me when placed in positions of leadership, my human failings got me into difficulties at times. And yet, I have felt blessed by a very generous God throughout these experiences."

Born on March 23, 1940 in Leamington, Ont., to émigré parents from the Soviet Union, John, along with his three sisters, learned at an early age about hard work on a family farm. He was baptized in 1959, preparing the way for a lifetime of service to the church.

As an educator and principal, he placed great value on his students, and would spend time with them during the day despite the work that needed to be done in his office. He wrote in his memoir, “Helen [his wife] would be dismayed to see the hole in my suit pants derived from playing sports outdoors with the students during recess or noon hour.”

“He always looked to God as his guide,” says Helen. “His daily discipline of Bible reading and prayer helped him in all areas of life as he strove to follow God's will.”

Driven by his love for God, John volunteered for many organizations, often finding himself in leadership positions. He was a strong champion for the Welcome Inn Community Centre in Hamilton, Ont.

Tim Epp, then a volunteer at Welcome Inn and now associate professor at Redeemer University in Ancaster, Ont., recalls: “John was a good listener. When he was talking with you, you were the focus of all of his attention because he was truly interested in your life.”

Marv Friesen, a former pastor of Welcome Inn Church, agrees: “It was always the relationship with people that mattered the most to him.”

Glenn Zehr, who was moderator of the Inter-Mennonite Conference, spent many hours at the board table with John. “I appreciated John’s gentle and capable ability to understand and explain complex situations and help to move us forward,” he says. “His personal faith in Christ shone through as we rubbed shoulders in this context.”

John returned to the role of conference moderator in 1997 with Mennonite Church Eastern Canada, a conference body that he had helped to shape.

“John loved Christ and the church,” recalls Mary Mae Schwartzentruber, interim executive secretary of MC Eastern Canada in 1998. “When he put his hand to a task for the church, he did it with his whole heart and mind.”

David Brubacher, MC Eastern Canada’s minister to conference in 2000, says, “John was instrumental in leading the executive board in a visioning process, and I feel that he was the right person for the time that he served as . . . moderator.”

John enjoyed telling people that he “camped at Silver Lake Mennonite Camp even before there were buildings!” He poured his energies into building the Pines at Silver Lake, even finding himself insulating the small crawl space under the building.

He chaired the Generations Mennonite Central Committee thrift store board through its move to 50 Kent in Kitchener, Ont.; travelled with a working tour to Colombia with MC Canada; and volunteered with Circles of Support and Accountability to support offenders as they reintegrated into the community upon release from prison.

John and Helen, through volunteering with Mennonite Disaster Service, also helped to rebuild and repair homes damaged by Hurricane Rita in Texas.

John took great pleasure in spending time with his children and grandchildren. He loved his family very much. One of his favourite things to do was listen to Helen play hymns on the piano. He was diagnosed with an inoperable brain tumour at the end of August 2020. His family was able to care for him at home during his illness. He died on Oct. 22, 2020.

“It’s only by God’s grace that I can do this” is an expression Helen recalls hearing John say many times. Faith was important to him and he showed that deep faith by caring for the church that belonged to the God whom he loved.

John Cornies with his grandson Henry at the Out-Spok’n Bike-A-Thon, MennoHomes Ride for Refuge in support of affordable housing. (Photo courtesy of the Cornies family)