Discussing the future of an inclusive church 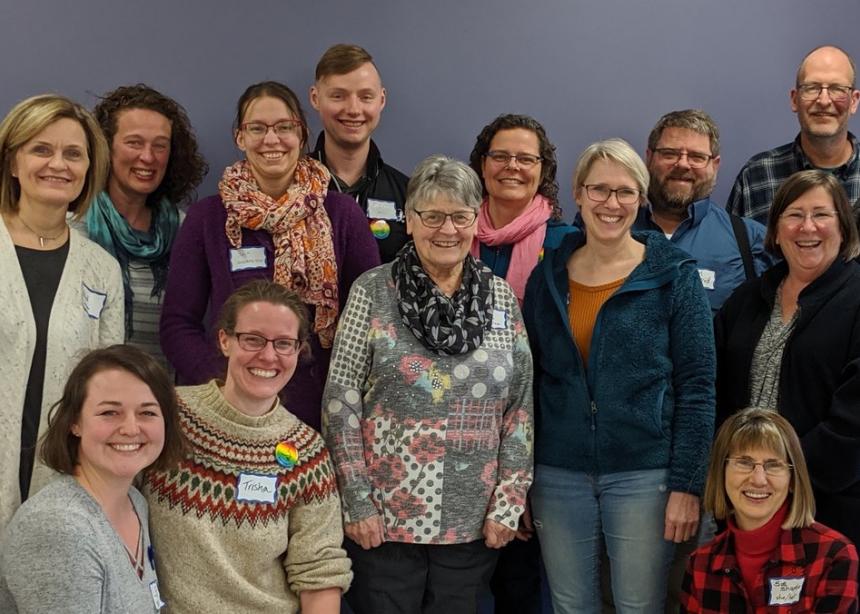 A group of people met after this event to continue conversations about the safety and inclusion of LGBTQ+ or gender, sexual and relationship diverse (GSRD) people in Anabaptist congregations, anticipating that some sort of network could be a place for LGBTQ+ Anabaptists to feel welcomed and represented.

Out of this discussion, a committee was formed. This small group met several times over the next months, dreaming about how to create a network that connects people, provides resources for individuals and congregations, and raises awareness.

The ITT names was chosen as a nod to the rainbow buttons that helped people show solidarity with LGBTQ+ people at the Mennonite Church Canada gathering in Saskatoon in 2016, and who commit to build safer Anabaptist communities across the country.

The group drafted statements reflecting the network’s vision, mission, values and objectives, but recognized the need to broaden the conversation to include a larger, more diverse group of people representing a wider geographic area. Invitations were sent to those who had added their names to a mailing list at the “Beyond binaries” event, and at the national church gathering in Abbotsford, B.C., last summer. Others were invited by word of mouth.

Across the country, over 50 people participated in the Feb. 29 event. In small groups they discussed and gave feedback on the draft statements of vision, mission, values and objectives for an inclusive network.

Conversations were filled with hope for an inclusive church. Suggestions included:

The committee acknowledges that much more work needs to be done. A more diverse committee will eventually need to be formed to see this initiative come to fruition.

Individuals or congregations interested in participating in this initiative can contact inthistogethernetwork@gmail.com. From a news release provided by the In This Together Committee.

Related stories:
‘Queer and quirky and profoundly worthy of wonder’
Creating space to work towards inclusion