Some thoughts on proselytizing 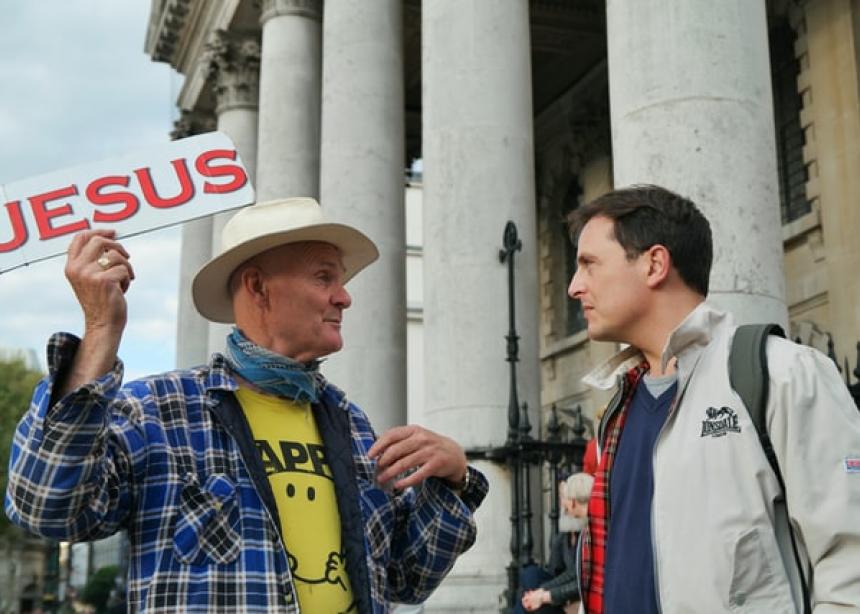 Should Christians still share their faith with those who don’t believe? I understand that in many contexts the answer to that question is obvious . . . though what is ‘obvious’ in one situation is exactly the opposite of what is ‘obvious’ in another. I get asked for my take on this issue periodically. I don’t think I’m asked because my opinion carries any special weight. I think I’m asked because people assume I’m conflicted about the issue.

Honestly, though, I’m not very conflicted about this ‘issue.’ In fact, I don’t think that the heart of the question is an ‘issue’ at all. Here’s what I mean: We all commend to others things we think are true and good. We all hold our core beliefs with universal intent. I don’t see any issue there. It’s just the way things are.

I am baffled by those who are adamantly opposed to proselytizing in matters of faith but are rabid with evangelistic fervor in matters of politics. I’m baffled by people who argue adamantly that nobody should argue for the truth of their faith. I’m baffled by people who confidently assert that all religions are equal paths to the same place, as though they possess some privileged vantage point from which to make this universal assertion, as though their universal claims are any less exclusive than those of the theological perspectives they so confidently quash.

Now let me add an important qualification to my perspective. I don’t think we should use power to compel others to agree with us or to adopt our spiritual practices. We should commend our beliefs and lifeways with an open hand, without force and with a willingness to learn from those with whom we are speaking. The fact that this has not been how faith has been shared is the reason many of us feel like we should be conflicted about this issue.

The other thing that I think makes us uncomfortable with religious persuasion, in my context at least, is some forms of it don’t fit the cultural moment. The neighbourhood that my family and I live in is periodically canvassed  . . . canvassed by political candidates or their surrogates, canvassed by representatives of one faith or another, canvassed by fundraisers and canvassed by people wanting to seal driveways, clean windows or fertilize lawns. I do not relish my encounters with these folks. They are all pushy. To all of them I am a means to an end. Also, as a pastor I cringe at being identified with door-to-door evangelists. There’s nothing especially biblical about religious canvassing in this way. It’s clearly annoying.

So, if by ‘proselytizing’ we simply mean commending our beliefs or lifeways to others, then I don’t think there’s really anything to talk about. This happens all the time. It’s not at all peculiar to people of faith, though it may be the case that many of us are more comfortable recommending a restaurant than those things that give our life meaning. On the other hand, if by ‘proselytizing’ we mean one set of people forcing their beliefs and lifeways on others, well, I’m not at all supportive of that.

One final caveat: While there are times when the act of ‘forcing’ of one’s beliefs and lifeways is obvious (and it should stop), much of life happens in the mire of persuasion and within various codes of conduct, where the right and wrong use of power is much harder to discern.

Anthony G. Siegrist pastors at Ottawa Mennonite Church in Ottawa, Ont. He blogs at anthonysiegrist.com, where this post originally appeared. His latest book, Speaking of God: An Essential Guide to Christian Thought, is available now from Herald Press.

More articles by Anthony G. Siegrist:
Why I’m not in a hurry to reopen church doors
Prayer and the lumberjack
We’re all in debt⁠—and it’s not a bad thing

For too long we have said my way is the only way, and the rest of you are going to hell?! Could we witness to the diversity in the Mennonite church, and re-imagine a vision of transformation on the meaning of unity? May diversity in church expresion be seen as an indicator of health? The following are two two metaphors: of a vision of unity because of diversity: 1. The metaphor of a prism through which white light enters, and re-emerges on the other side in a full spectrum of colours. 2. A rain forest that is perceived as a whole yet it supports a rich diversity of life. i do believe a vision of unity, because of diversity is worthy of further discernment

This ignores the fact that North American Christians continue to support overseas missions that go well beyond commending beliefs. It also ignores the near erasure of Indigenous religions in North America by Christian proselytizing. Recovery of Indigenous spirituality plays an important role in the healing journeys for many, yet Christian groups persist in doing harm especially in remote communities. A recent CBC article describes a disturbing example of this ongoing harm. Apparently the Northern Light Gospel Mission has rebranded itself as a youth mission.
https://www.cbc.ca/news/canada/thunder-bay/northern-ontario-evangelical-...

We need some honest conversations about proselytizing and it’s ongoing lack of respect for the beliefs and life ways of others.

I see this issue very simply as according to God’s word. Jesus said, "I am the way, and the truth, and the life; no one comes to the Father but through Me.” (John 14:6) The eternal hope for everyone, no matter their race, creed or colour lies with Jesus Christ, if only they will repent and believe in Him for their salvation.

Attempting to win others to faith in Jesus Christ is a beautiful thing. If the act of doing that is what is being referred to as "proselytizing", then proselytizing is what true Christian believers must do. No “deity” and/or spiritual practise outside of the Gospel of Jesus Christ can truthfully offer eternal hope and life with Him. All religions or spirituality, outside of what God accomplished for us through Jesus Christ, are rendered meaningless, hopeless, and ultimately dangerous to the spiritual well being of others.

dogged in their determination to get to where they are going.

The Power of Proselytization

The German philosopher Friedrich Nietzsche (1844-1900) observed that perhaps the primary human motivating force is “der Wille zu Macht,” the will to power. Dietrich Bonhoeffer (1906-1945), a Lutheran pastor and theologian during WWII, writes in his Letters and Papers from Prison (p. 1951) that “God is weak and powerless in the world, and that is precisely the way, the only way, in which he (sic) is with us and helps us.” The Nietzsche – Bonhoeffer continuum of power provides a useful navigation for the church as we try to find our way through the morass and pitfalls of our 21’st century existence.

Anthony G. Siegrist, pastor of Ottawa Mennonite Church, contributes “Some thoughts on proselytizing,” in an Oct./20 Canadian Mennonite Magazine article. Mr. Siegrist states that he is “not conflicted about proselytizing … we all hold our core beliefs with universal intent. I don’t see any issue there. It’s just the way things are.” This does seem to be a very Nietzschien acknowledgement that our attempts to promote our core beliefs is a natural and universal quality, a quality which reinforces a very human “will to power.”

Mr. Siegrist does qualify his perspective with “I don’t think we should use power to compel others to agree with us or adopt our spiritual practices.” This acknowledges Nietzsche’s understanding of the human motivation of the will to power, however Mr. Siegrist seems to make the effort to distinguish between proselytization and power. This seems to be a distinction without a difference. Proselytization is a will to power, and on a power/powerlessness Nietzsche/Bonhoeffer spectrum, leans heavily towards Nietzsche. This is very much in the “cannot serve two masters” territory.

Western Christianity and iterations/manifestations thereof have been heavily reliant on the use of power to further their existence, and Anabaptist/Mennonite churches/institutions are no exception. Since 1492, white Western Christianity has succeeded in “proselytizing Indigenous peoples/culture to death” literally, in its sweep of power across the continent.

Christianity relied on/relies on proselytization for its continued existence. As Christians, we said “we mean you no harm,” “we come in peace,” and even “we are pacifists (meaning we won’t kill you outright)” Then in the next breath we used all the power and means at our disposal to take the land, take the resources, starve the people, and tell them our God will care for their souls. Hmm! Not sure if this is the benign variety of proselytization which Mr. Siegrist was referring to, or whether this was the more aggressive approach.

Bonhoeffer’s writings encourage followers of Christ towards powerlessness. I think Mennonite Church Canada could benefit in heading in such a direction. Let’s put our “missionistic” programs aside, as these impulses/tendencies towards proselytization are manifestations of the “will to power.” Let’s try to find the God in the powerless in society, and in the powerlessness of Christ’s death on the cross as Bonhoeffer suggests.

the application of F. Nietzsche's "Will to Power" to MC Canada's missional efforts is a serious misapplication of Nietzche's thought and represents a new low in the ongoing deformation of Anabaptist thought in NA as presented by Mr. Reimer.

Remember that Mr. Nietzsche came to the insights he had, and promptly went in insane. He perished, quite insane. Is that the future we are embracing? Abject insanity leading to death?

In the Mennonite village in which I grew up, what you did was important and "preaching" at others was inappropriate. We moved to another community where you were expected to witness in words and lead others to faith in Christ. At university, I invited a Sikh classmate from India to our young people's meeting. He accepted and the next day presented me with a large volume of the history of India and its people and asked me to read it. I did, was impressed and was relieved to give up "saving" others for "sharing with" others. I am gratified when co-workers and others have asked me to share in words. Words are not the most important way I share my faith.