In 1941, with war raging in Europe and conscription looming over Canada, William Lyon Mackenzie King made a shocking declaration. He vowed to protect the rights of individuals and religious groups whose beliefs prevented their participation in military service. Under an Order in Council, another option was created: Young men, including Mennonites, would be allowed to work in Alternative Service building highways, national parks, farming and fighting forest fires. Theatre of the Beat’s Johnny Wideman and Rebecca Steiner co-wrote and researched a play to bring this history to life. Yellow Bellies is titled after the pejorative term used to describe young men who refused to take up arms because they were thought to be cowards or traitors. Told episodically, Yellow Bellies utilizes pieces of written history to take audiences across Canada, featuring verbatim interviews, fictionalized scenes and live music from the era. The songs are provided by Joe McLellan, who offers his own renditions of the camp songs sung by those working in Alternative Service. Performance dates, locations and times:

—Theatre of the Beat 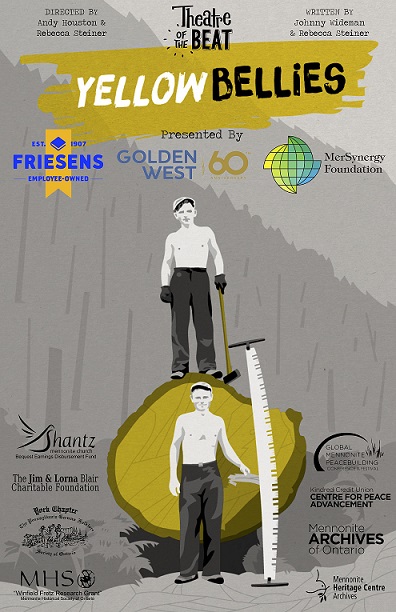