Adventures in the Middle East 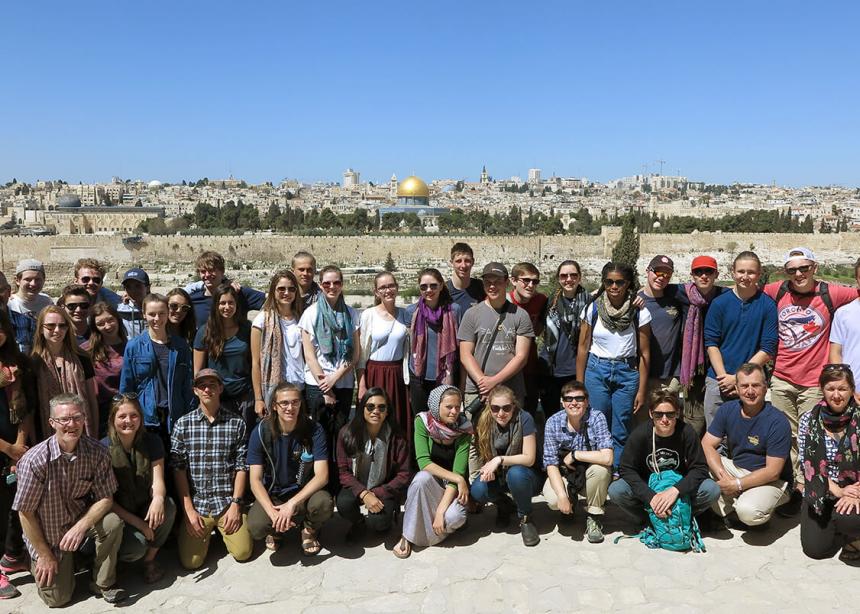 It was while she was in Bethlehem, spray painting a black heart onto the Israeli West Bank barrier, that the reality of the Israel-Palestine conflict truly began to sink in for high-school student Jaymi Fast. “I found it was easier to understand [the political situation] when I was there,” she says. “It was still confusing—there’s so much going on—but I could put places to names and I could get more out of it.”

Fast was one of 33 Grade 11 and 12 students and five chaperones from Westgate Mennonite Collegiate in Winnipeg who participated in a study tour of the Middle East from March 21 to April 10. In addition to stopping in Bethlehem and Jerusalem to speak with Israelis, Palestinians and Christian Peacemaker Teams workers about the conflict, the tour included a hike along the Jesus Trail, a 65-kilometre path in the Galilee region of Israel that connects important sites from the life of Jesus.

The group’s stops also included Petra, a historical city in southern Jordan, and Wadi Rum, a desert valley in southern Jordan. Along the way, the group met and interacted with a variety of different groups of people of all ages, including Muslims, Jews and Christians.

The objectives of the trip included meeting with Mennonites working in other countries, visiting the historical centre of the Christian faith, meeting with people of other cultures, and learning to travel in such a way that respects cultures and traditions in intentional ways, says James Friesen, the Westgate teacher who organized the trip.

“In North America right now . . . we’re very suspicious of difference, and here we are, throwing ourselves into difference,” he says. “It’s great to realize the first response doesn’t have to be fear; it can be [asking questions].”

Watching Israeli soldiers interact with Palestinians was particularly emotional for student Andrew Hutton. “The things they did to the Palestinians, searching them for no reason, that’s the biggest thing that stuck out to me,” says Hutton, who was angered by what he saw.

The group spent an evening hearing from members of the Parents Circle, a grassroots organization of bereaved Palestinians and Israelis. An Israeli man related how his daughter was killed by a Palestinian suicide bomber, and a Palestinian woman shared how an Israeli soldier captured her brother. Hearing about the losses that have occurred on both sides of the conflict showed the students that there are no easy answers when it comes to resolving the conflict. It also showed them how some Israelis and Palestinians are reconciling with one another.

“Even though there’s so much political tension in their lives, it was really neat to see love has no borders,” Fast says. “Pain is pain—everyone feels it—and it’s powerful to see an Israeli man comforting a Palestinian woman.”

For Nathan Dueck, visiting historical sites from the Bible, like the Sea of Galilee and the Garden of Gethsemane, was particularly impactful. “There’s so much religious importance [in the Middle East], that I came away from the trip profoundly, profoundly impacted by the experience from a religious standpoint,” he says.

Kristjanna Pensato agrees. When she returned home and told her father about the flowers she saw on the Jesus Trail, he quickly looked up all the instances in the Bible where Jesus mentions flowers, such as when he asks his followers to consider the lilies of the field. “It was really incredible along the Jesus Trail, walking through these fields of flowers that Jesus talked about,” she says.

One of the trip’s unexpected moments occurred toward the end of the group’s first day on the Jesus Trail, when they visited the Roman Catholic church at Cana that commemorates Jesus’ first miracle of turning water into wine at a wedding there.

A Baptist couple from Texas was walking with the group, and had planned to renew their wedding vows when they arrived at the church to commemorate their 25th wedding anniversary. When they arrived, the priest declined to officiate the ceremony because the couple were not Roman Catholic. They turned to Friesen and asked if he was Christian and if he would officiate the ceremony.

In a sanctuary filled with Westgate students, Friesen told the story of the wedding at Cana and led the couple in renewing their vows. It was an emotional experience for all involved, particularly the couple, who insisted that Friesen had saved their wedding.

Experiences like that created a sense of camaraderie among students, Dueck says. “We really bonded as a group. I thought, wow, I’m so happy that I got to grow and maintain and create these friendships with my fellow students.”